Matt Taibbi on the Unfolding Libor Scandal and What Sen. DeMint’s Departure Means for Fractured GOP

News of HSBC’s $1.9 billion fine comes as three low-level traders were arrested in London as part of an international investigation into 16 international banks accused of rigging a key global interest rate used in contracts worth trillions of dollars. The London Interbank Offered Rate, known as Libor, is the average interest rate at which banks can borrow from each other. We’re joined by Matt Taibbi, contributing editor for Rolling Stone magazine and author of “Griftopia: A Story of Bankers, Politicians, and the Most Audacious Power Grab in American History.” Taibbi also comments on the departure of Republican senator and tea party favorite Jim DeMint of South Carolina. [includes rush transcript]

AMY GOODMAN: “Blue Shadows in the Street,” the Dave Brubeck Quartet. The jazz legend Dave Brubeck died December 5th, a day short of his 92nd birthday. His signature sound, with its unique rhythmic structure, was inspired by a U.S. State Department goodwill trip to the Middle East and India that Brubeck made during the height of the Cold War. That trip led to the release of Time Out, with his hits “Take Five” and “Blue Rondo à la Turk.” It went on to become one of the best-selling jazz albums in history. There was a private memorial service that his family held yesterday.

JUAN GONZÁLEZ: Yeah, I wanted to ask you about the Libor crisis, which has to be an even bigger scandal in terms of the reality that you’re talking about a rigging of a major portion of the world’s credit system. And again HSBC is involved. Three of its—three of its bankers were arrested in the past few days in relationship to the ongoing investigation.

MATT TAIBBI: Yeah, I think the bankers who were arrested, actually one of them was a UBS banker. There was another who was a broker for a London brokerage. But again, already, the Royal Bank of Scotland has been a cooperating bank. UBS, the Swiss bank, has already—has some cooperators. And Barclays obviously has also been implicated in this scandal. Those are three of the 16 members of the Libor panel. There are 16 banks that convene every day, and they essentially set prices for interest rates around the world, which are based upon Libor, which is the rate at which banks borrow from each other.

And, you know, it turns out, through this investigation, that banks have been monkeying with these rates, some people say dating back to the early ’90s, for a variety of reasons. One reason that is given is that during the crisis in 2008, regulators wanted the system to look healthier than it was, so they artificially allowed it to inflate. But it also appears that they were messing with the rates in order to personally make profits on their investments, which is incredible, because Libor affects about $800 trillion worth of financial products worldwide, so fixing the prices of Libor is an enormous thing.

AMY GOODMAN: I wanted to ask you about “Jim DeMint: The Fireman Ed of Politics,” you write.

AMY GOODMAN: You say his departure is more interesting to you than the so-called fiscal cliff fight in Washington.

MATT TAIBBI: Yeah, I just think that this is the schism that we’re now seeing within the Republican Party between, you know, the purists, who don’t want to be involved in the negotiations and don’t want to be part of any compromise that might involve a tax hike—you know, Jim DeMint’s decision to sort of pick up his ball and go home and leave the system, I think, is highly symbolic. You know, having covered the presidential race this year and seen the mood out there among conservatives, there’s a strong sentiment, especially after Barack Obama won, that playing by the rules and supporting the Republican Party’s sort of more moderate candidate is a failed strategy. And I think DeMint’s resignation, to me, is highly symbolic of what’s the thinking is among a lot of conservatives across this country, which is that we just can’t be involved anymore in the mainstream political system. And it’s interesting.

JUAN GONZÁLEZ: —president of the Heritage Foundation, and a multimillion-dollar salary, right?

MATT TAIBBI: Absolutely, yes. No, it’s—in reality, it’s one mainstream move—step to the other. But, you know, it is a symbolic move for the people—for tea partiers and people who follow this movement. They’re going to perceive this as, you know, “I can’t play the dirty game anymore. I’m going to fight from the outside, and we’re all going to be outsiders now, as opposed to being inside the system.” And that, to me, is really interesting.

AMY GOODMAN: This is what Senator Jim DeMint said when he announced his resignation.

SEN. JIM DEMINT: I have played a role in stocking the Senate with solid conservatives who are younger and brighter and better spokesmen than I am. And so, I know I’m leaving the Senate better than I found it, with some real leaders. But this is an opportunity to do more to get the American people behind them. If we don’t do that, it’s going to be hard to keep people here in Washington who are promoting the right ideas.

AMY GOODMAN: Senator DeMint resigning. Finally, Matt Taibbi, what it means also for what is the—what’s happening with the Republican Party right now in Washington? And with the fiscal cliff negotiations, also everything with HSBC, if you see a difference in the way the Democrats are dealing with the large financial institutions than the Republicans?

MATT TAIBBI: Oh, I don’t see an enormous difference. You know, the way it was always put to me in Washington by one Senate aide was, you know, if Wall Street gets 100 percent of what it wants from the Republicans, it gets 96 from the Democrats. You know, I don’t think there’s an enormous, substantial difference between the two parties. But I think this move has—you know, the DeMint resignation has big implications for the Republican Party. It shows that there is a divide between their base and the party structure itself. And it’s going to take a long time for them to repair that. They have to figure out a way to encompass everybody that’s in the party and get them all fired up at the same time, and they haven’t had any success in doing that.

AMY GOODMAN: Well, I want to thank you very much for being with us, Matt Taibbi, contributing editor for Rolling Stone magazine, author of the book, Griftopia: A Story of Bankers, Politicians, and the Most Audacious Power Grab in American History. 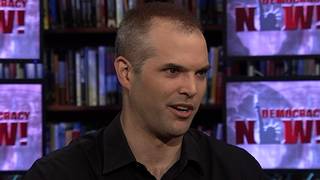