We air an excerpt of an address by the legendary filmmaker Michael Moore delivered just hours after the Newtown massacre. Moore won an Academy Award for his 2002 documentary, “Bowling for Columbine,” about gun violence in the United States. He discussed the Sandy Hook Elementary School massacre at a New York City event on Friday night. Video courtesy of filmmaker Lorna Tucker. [includes rush transcript]

AMY GOODMAN: We turn now to the Oscar-winning filmmaker Michael Moore, who won that award for his 2002 documentary, Bowling for Columbine, about gun violence in the United States. On Friday night, Michael Moore appeared at the Bring Leonard Peltier Home 2012 event at the Beacon Theatre here in New York City, speaking just hours after the Sandy Hook Elementary School massacre.

I hope you don’t mind, but I’d like to just say a few words about what happened today, because I’ve been concerned about this issue for a long time. Yes, we need more gun control. Yes, we need free mental health services in this country. But I really believe that even if we had better gun control laws and better mental health, that we would still be the sort of sick and twisted, violent people that we’ve been for hundreds of years, that it’s something that’s just in our craw, just in our DNA. And to get that out of our DNA is going to take a lot more than passing a bill in Albany or D.C. That’s not going to do it.

And, you know, other countries, I mean, they have their crazy people, and they have people that—there have been shootings and killings in Norway, in France and in Germany. But there haven’t been 61 mass killings like there have been in this country just since Columbine. Sixty-one mass shootings in this country. I like to say that I sort of agree with the NRA when they say, “Guns don’t kill people, people kill people,” except I would just modify that a bit and say, “Guns don’t kill people, Americans kill people,” because that’s what we do. We invade countries. We send drones in to kill civilians. We’ve got five wars going on right now where our soldiers are killing people—I mean, five that we know of. We are on the short list of illustrious countries who have the death penalty. We believe it’s OK to kill you when you’ve committed a crime.

And then we have all the other forms of violence in this country that we don’t really call violence, but they are acts of violence. When you—when you make sure that 50 million people don’t have health insurance in your country and that, according to the congressional study that was done, 44,000 people a year die in America for the simple reason that they don’t have health insurance, that’s a form of murder. That murder is being committed by the insurance companies. When you evict millions of peoples—millions of people from their homes, that’s an act of violence. That’s called a home invasion.

All the wrong people are in prison in this country. I can’t believe we’re just standing blocks away from the biggest criminal operation that this country has ever seen, right down that street, and not one of them has gone to prison for what they’ve done. When you have eliminated so many millions of jobs, when you’ve ruined communities like mine, Flint, Michigan, you have killed people, because—because having seen firsthand the effects of these corporate decisions—the alcoholism, the drug abuse, divorce, suicide, all the social problems that go along with this act of violence—but we don’t call it violence, and no one’s ever arrested for it—I think it’s a real shame. And frankly, as an American, this is not how I want to be remembered.

AMY GOODMAN: Michael Moore, the Oscar-winning filmmaker, won the Academy Award for Bowling for Columbine after the Columbine massacre, speaking on Friday night just hours after the—after the massacre in Connecticut. Special thanks to filmmaker Lorna Tucker, who’s currently working on a documentary with the working title Leonard Peltier: An American Prisoner. 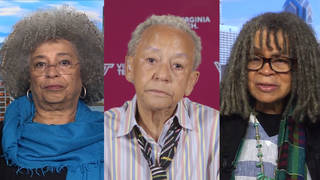 Angela Davis, Nikki Giovanni & Sonia Sanchez on the Crisis in America & the Death of Toni Morrison