On Saturday, the newly formed Arab Youth Climate Movement organized the first-ever climate march in Qatar, host of the U.N. climate change summit. Hundreds of people took part in the permitted march in downtown Doha calling on negotiators to take action at this year’s climate summit. The protest was organized by a coalition of young environmentalists. Democracy Now! producer Mike Burke spoke to some of the marchers. [includes rush transcript]

AMY GOODMAN: We’re broadcasting from Doha, Qatar, from the U.N. Climate Change Conference. On Saturday, hundreds of people took part in a permitted march in downtown Doha, calling on negotiators to take action at this year’s climate summit. The protest was organized by the Arab Youth Climate Movement, a newly formed coalition of young environmentalists. Democracy Now! producer Michael Burke spoke to some of the marchers.

MARIAM ALLAM: My name is Mariam Allam. I’m from Egypt. I’m the coordinator of the Arab Youth Climate Movement in Egypt. We are here today to march for climate action. We want to push the Arab leadership in the COP. We want them to start pledging feasible, ambitious pledges to combat climate change. I’m with the Arab Youth Climate Movement, which was actually formed to create a grassroots movement to create awareness on climate change and start to find the solutions, and also to take part in the negotiations so we will be aware of the positions of our countries and respond to whatever pledges or whatever position they take to be part of the solution. So, the march is actually a part—it’s annually. It happens annually in each and every COP. And this year it’s happening in Qatar. It’s for the first time in the GCC to have a climate march. So, we helped and we assisted to support this march, since we are—since we are Arab youth.

SARAH RIFAAT: My name is Sarah Rifaat. I am from Egypt. I’m the Arab world 350.org coordinator, and I’m also part of the Arab Youth Climate Movement. We need to continue pushing on building a global movement, basically, to make sure that we tackle this, like, huge problem facing humanity, because we’re running out of time. And every year we say that. Every year, it’s even—it’s more urgent, more serious. And so, we—like, some people are saying we have three years; some people are saying five. And, to me, that’s—I mean, we are running out of time, but I think there is will, and there’s a lot that’s been—that’s happened in a few months. Like, what I’ve seen with the Arab Youth Climate Movement gives me hope. So I’m hoping that everyone else sees how they can play a really strong role in building this movement wherever they are.

MIKE BURKE: What is your message to the United States? I mean, inside the talks, they’re one of the most important players.

KHALID AL-MUHANADI: My name is Khalid Al-Muhanadi. We are from Doha Oasis. It’s a grassroots organization in Qatar. And we are the ones with more than 50 NGOs around the world. We are—we organized this march in Qatar.

MIKE BURKE: And what is your message to negotiators inside?

KHALID AL-MUHANADI: My message: more action. More action. That’s it. That’s our message. It’s actually, we are one earth, one environment and one people. So we have to unite to take action—not only the leaders, us, as well, because we are—we are part of this pollution.

KATE CATLIN: My name is Kate Catlin. I’m from Seattle, Washington. And I’m marching today to convey to our leaders that we need action now, and it’s time for them to build their climate legacy.

MIKE BURKE: And what is your message to negotiators, especially from the United States?

KATE CATLIN: I think over the last year we’ve seen a number of incidents in the United States that really brings the impacts of climate change back to us at home. This is no longer an issue that we can ignore, because it is literally killing Americans today. And I think that the message that we can bring to our leaders is that it’s time for them to step up, not only out of equity to the whole world, but out of justice and protection for their own citizens. Youth are generally the ones who are most impacted by this issue, and I think that we are the ones who need to show our leaders that we’re ready for them to build their climate legacy, because it’s a matter of intergenerational justice.

MIKE BURKE: And when you say “climate legacy,” what do you mean? I’m not—that’s a phrase I think a lot of people might not be familiar with.

KATE CATLIN: Sure. Climate legacy is this idea that the leaders of today, who are my parents’ generation, are leaving behind a legacy of ruining the earth and of ruining our climate and of ruining our atmosphere. And they are leaving behind a legacy to their children of irresponsibility and of mass weather disasters that will be impacting my generation and my children. And I think that what we hope is that President Obama now turns it around.

QUEEN EHIRIM: My full name is Queen Ehirim. I’m from Nigeria. Climate justice is when you’re talking about policymaking, you’re talking about the inclusion of the youth for decision making, you’re talking about women and gender equality. You are talking about so many things that has to do with making our environment good for us. We are the youth. We are going to carry the responsibility and the consequences of what is going to happen in future, and that is what we don’t want. We want climate justice. We don’t want—we want the world to [inaudible]. They should act fast. They should act quickly, because environmental disaster is real. Climate change has a great impact on women, because we are looking at climate change—number one impact on women is that they’ll lose their farmlands. They lose their farmlands. They lose their rivers. They lose water. And, you know, the women, especially in developing countries, these are the people that have great—these are the people that—

MARCHER: Excuse me. Can you go forward, please?

TASNEEM ESSOP: I’m Tasneem Essop. I’m with WWF. And we’re marching here in support of the local civil society organizations, who are calling on their governments to have more action against climate change.

TASNEEM ESSOP: More action means that we’re needing to come out of these talks with real cuts in emissions, so they have to cut carbon, and they have to put money in the bank.

MIKE BURKE: And can you tell me where you’re from and how climate change has affected your region?

TASNEEM ESSOP: I’m from South Africa. And, of course, we’re a big emitter in South Africa, so we are both contributing towards—not as massively as the rich, industrialized countries, but we do contribute towards global emissions. But we are also going to feel huge impacts. We are feeling impacts in terms of droughts. We have extreme weather events like floods, and we have long, dry summers and fires. And so, in our informal settlements, we have, you know, huge fires, and people lose their homes. Food security is being impacted on. Livelihoods are being impacted on. So we’re already feeling the impacts in our country.

MIKE BURKE: And what is your message to negotiators inside, especially the ones from the Gulf region?

TARIQ AL-OLAIMY: We need to start taking the lead on climate change. Traditionally, we’ve been very passive, at times, in these negotiations. We are developing countries, but also countries that are very vulnerable to climate extremes. Places like Bahrain and Qatar are very vulnerable to sea-level rises. And we talk about sustainable development. We need a very good, strong basis to go forward to develop a society, environment and the economy. And it is important for Arabs really to get very much engaged and increasing ambition, both within the region but also developed countries, as well.

MIKE BURKE: And what is your message to governments that depend so much on oil for revenue as to, you know, how they should go forward?

TARIQ AL-OLAIMY: Well, it isn’t sustainable. We know, whether it’s Bahrain, Qatar or Saudi, eventually those fossil fuels will subside. And we need to start making that transition, especially from a fossil-fuel-based subsidies economy, and shifting the subsidies to renewable energies. We’re not talking about something that will happen overnight, but eventual shift from a—to a new development model. That isn’t just focused on the next 20 years, but actually for developing society for the next thousands of years. 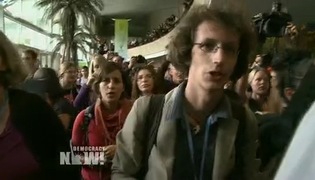