Egypt’s judiciary has joined mounting protests in the country against President Mohamed Morsi’s decree last month seizing wide-ranging powers and immunity from the courts. The country’s judges have refused to oversee the referendum on a draft constitution scheduled in two weeks. Opposition groups had called for protests against the referendum last week. The decision by the Judges Club follows a confrontation between Egypt’s Supreme Constitutional Court and Islamist supporters of President Morsi. On Sunday, the country’s highest court suspended its sessions indefinitely after Islamist protesters surrounded the building. We go to Cairo to speak with Democracy Now! correspondent Sharif Abdel Kouddous. [includes rush transcript]

AMY GOODMAN: We’re broadcasting for the week from Doha, Qatar, but we’re turning right now to Egypt. Egypt’s judiciary has joined mounting protests in the country against President Mohamed Morsi’s decree last month seizing wide-ranging powers and immunity from the courts. Egypt’s judges have refused to oversee the referendum on a draft constitution scheduled for two weeks from now. Opposition groups had called for protests against the referendum last week. This is the head of the Judges Club, Ahmed El-Zend.

AHMED EL-ZEND: [translated] Egypt’s judges refuse to supervise the referendum of the constitution that has been scheduled for December 15th, 2012. This decision comes in response to the so-called constitutional decree, until this decree has been canceled or frozen, along with all its articles.

AMY GOODMAN: The decision by the Judges Club follows a confrontation between Egypt’s Supreme Constitutional Court and Islamist supporters of President Morsi. On Sunday, the country’s highest court suspended its sessions indefinitely after Islamist protesters surrounded the building. The protests came as the judges were set to rule on the validity of the panel that drafted the Egypt’s constitution. The judges said they were unable to enter the premises, calling it, quote, “the blackest day in the history of Egyptian judiciary.”

Well, to talk more about the protests in Egypt and the judges’ decision, we go to Cairo to talk to Democracy Now! correspondent Sharif Abdel Kouddous.

Sharif, welcome back to Democracy Now! We last spoke Friday. Tell us—update us on what has taken place, the significance of the judges’ decision, of President Morsi’s decision to hold the referendum, and what the Egyptian constitution that has just been written is all about.

SHARIF ABDEL KOUDDOUS: Well, Amy, as you mentioned, I mean, the country has been reeling from a series of political developments over the past 10 days, some of the biggest protests since Mubarak’s ouster—as you can see behind me, an ongoing sit-in in Tahrir Square—the Muslim Brotherhood holding a massive protest on Saturday outside Cairo University in support of Morsi’s decision. This was all set off by the declaration Morsi made, a constitutional declaration on November 22nd whereby he declared himself—gave himself far-reaching powers and put himself above any kind of judicial oversight. And Morsi himself has made very clear that the reason he made this constitutional declaration was to protect the transition going forward. They feared that the Supreme Constitutional Court, as you mentioned, was going to dissolve the constituent assembly and throw the transition process, as the president and the Muslim Brotherhood see it, into chaos. So, this was a decree he made that has really starkly polarized the Egyptian body politic. And as we’re seeing right now, there’s a big confrontation between the judiciary and Mohamed Morsi. Of course, the courts have already dissolved a first constituent assembly in Egypt and had dissolved the parliament that was elected after Mubarak’s ouster.

So, with respect to what you said about the judges not supervising the referendum, Morsi has called for referendum on this constitution on December 15th. By Egyptian law, judges must be at the polling stations to oversee the vote. The Judges Club represents many judges in Egypt, thousands of judges. Its leaders—and we just heard El-Zend speak in that little clip—have been very vocally anti-Islamist, very vocal against the rise of Islamist leaders, and very politicized. Having said that, their decision not to supervise the referendum is not binding. So, we’re still unclear what exactly is going to happen. This is a very tight position Morsi is in. If there are not enough judges to oversee this vote, his only other option presumably is to issue another constitutional declaration and change the law, and there’s been talk of university professors or other people from institutions to oversee the vote, which could further throw into question the legitimacy and the credibility of this document.

Now, as you mentioned, the constituent assembly really sent a shock wave through the body politic of Egypt when it announced it was going to hold a final vote on Thursday on the draft of the constitution that they had so far. Let’s remember, in Morsi’s decree, he had a—he had issued a two-month extension for the constituent assembly to complete its work. This was in the face of a walkout by nearly all of the non-Islamist members of the constituent assembly. There was no Christian—no representative of the churches of Egypt’s Christian minority in the constitution assembly. There were only four women. All of them were affiliated with Islamist parties. So, this was the body that went to a vote very hastily on Thursday. They held a 17-hour session. It was—that ended around 7:00 a.m. There was a very self-congratulatory tone about—about the vote itself. It was clear that they weren’t ready. There was grammatical errors and words missing. And so, they were really forcing through this vote. And that has passed since being put to—being put to, of course, a referendum on December 15th.

On the issue of freedom of religion, it limits—it says there is freedom of religion, freedom of belief, but it limits the right to practice and to build places of worship to the three so-called Abrahamic religions—Christianity, Islam and Judaism. So, you know, things like Egypt’s Baha’i minority, which have experienced heavy discrimination in the past, are not—are not protected against.

In term of a women’s rights, there’s an absence of an article specifically equating—or banning discrimination of women. The only time women are mentioned specifically is in Article 10, that—and it says the state—it refers to them in the context of the family. It says the state is tasked with enabling reconciliation between the duties of a woman toward her family and toward her work. Now, this kind of language was in the previous constitution, but we’re really looking at this in a different political context right now in Egypt, a context in which, parliamentary elections coming up, the Muslim Brotherhood is expected to gain a larger number of votes, as it did last time, so are members of the ultra-conservative groups, the Salafi groups, and so laws that could severely restrict things like women’s rights are very possible under this constitution.

And perhaps most egregiously, of course, is the role of the military and of military trials. More than 12,000 civilians were put on military trial after Mubarak’s ouster. It was one of the key issues in the transitional period. There had been a line that had put a ban on any civilian standing before a military court. After an objection by the military, that text was removed. So now there is a provision that does allow for civilians to stand before military trials. There is no parliamentary oversight of the military budget, which was a key concern for many groups. It instead has a National Defense Council that includes many members of the military that will oversee the budget.

So, this is the document that is now going to go up for a referendum on December 15th. Egypt is very, very starkly polarized right now. As we said, we saw massive protests in support and against. There’s protests planned tomorrow to march to the presidential palace. There’s a number of—we’re also seeing a stark polarization in the media, with newspapers today, several private newspapers, issuing the same cover that had like a drawing of a person chained in a cell, and it said, “No to dictatorship.” Tomorrow, many of these same newspapers are withholding publication in protest. Some state, some private media channels are also going to go black in protest of all of this.

And, you know, this is—this is all happening right now in Egypt, and it’s unclear what, going forward, it’s going to be. It’s been such a turbulent and chaotic time. And the Muslim Brotherhood, where of course the president, Mohamed Morsi, hails from, looks like they want to force the transition through. And by many accounts, many people—if you had to ask me, I hate to give predictions, but I would think that the referendum will probably pass, because there is no alternative. The “no” vote for people—people are unclear what will happen if this referendum is voted down. There’s no clear process of what exactly would take place then. And we saw this before in the first referendum on March 19th, right after Mubarak’s ouster. So it remains to be seen what’s going to happen in the coming days. It’s a very chaotic period. It’s a very tumultuous period. And we’ll have to see what happens in Egypt in this—in the next few days and weeks.

AMY GOODMAN: Well, Sharif, I want to thank you very much for that update. Sharif Abdel Kouddous, Democracy Now! correspondent in Cairo, Egypt. 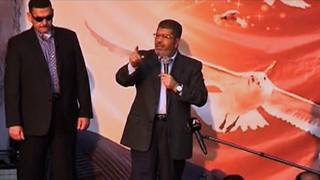