President Obama’s re-election to a second term has fueled hopes across the world of a concerted U.S. effort to address global warming. But so far even the devastation of Superstorm Sandy does not appear to have shifted the Obama administration’s stance opposing binding emission targets. On Monday, U.S. Special Envoy for Climate Change Todd Stern took questions for the first time from reporters at the U.N. Climate Change Conference in Doha. Stern indicated no change in the role of the United States in global climate negotiations and refused to criticize the record per capita emissions of Qatar, the host of this year’s conference. [includes rush transcript]

Ministers have begun arriving in Doha for high-level talks here at the United Nations climate change summit. Little hope remains that the world’s nations will agree to new binding limits on greenhouse gas emissions. The United States has been widely criticized for pushing a new paradigm of voluntary pledges to cut emissions, but scientists warn the system does not go far enough to prevent catastrophic climate change. In addition, the United States and other large greenhouse gas emitters are opposing calls for them to pay poorer nations for loss and damage from weather events caused by climate change.

As climate negotiators met in Doha, a major typhoon hit the southern Philippines. Typhoon Bopha is the most southerly typhoon ever recorded in the western Pacific. At least 40,000 people were evacuated from their homes. Preliminary reports say at least six people have died.

Meanwhile, parts of the Caribbean and the New York-New Jersey region are still recovering from the devastating Hurricane Sandy. A new poll by Siena College found 69 percent of New York residents now believe climate change is real after the storm. The storm does not, however, appear to have shifted the Obama administration’s stance opposing binding target emissions.

On Monday, the U.S. climate change negotiator, Todd Stern, took questions for the first time from reporters at the conference.

REPORTER: Expectations are obviously very high for the U.S. right now, especially after the election. Someone I talked to yesterday described Doha as the second-term administration’s coming out party on climate, whether—whether the administration is ready for it or not. So, you know, people expect to see either a major change in tone or substance from the U.S. this week. What are you prepared to do here that’s different? Thanks.

TODD STERN: Well, I—look, I don’t know if I would—if I would—would think about this in terms of a different tone here. Look, the—the U.S. has done quite significant things in the president’s first four years, in his first term.

AMY GOODMAN: U.S. climate negotiator Todd Stern went on to reference a number of domestic initiatives to cut emissions but did not indicate a change in the role of the United States in global climate negotiations. Stern also refused to criticize the record of Qatar, the host of this year’s climate change summit. Qatar has the highest emissions per capita in the world.

PAT CARLSON: Pat Carlson with IRN Radio. Mr. Stern, I did find it—wonder if you find it ironic that a U.N. conference that’s all about phasing out fossil fuels is being held in a country whose great economy and great wealth has been built on oil?

TODD STERN: Well, no, I don’t find it ironic. I—I’m pleased by the hospitality that the Qataris are extending. And I think, look, I don’t—I’m not one that’s going to throw stones at—at countries in this region who produce fossil fuel that has helped fuel the world economy and has been—you know, has been important, undeniably. I think it is quite a good thing and a thing that should be encouraged when you see countries in this region starting to take real affirmative steps in the direction of developing alternatives and using some of that wealth to develop alternatives. And that is starting to happen in this region. 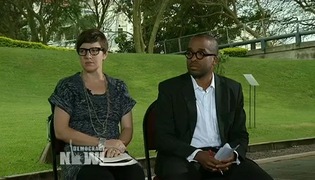