Whitney Houston is just the latest cultural icon to pass away during this year’s Black History Month. On February 1, “Soul Train” host Don Cornelius was found dead at his home in Los Angeles, in what appeared to be a suicide. Cornelius brought black music and culture into America’s living rooms through his dance show, “Soul Train,” one of the longest-running syndicated shows in television history, and played a critical role in spreading the music of black America to the world. “Don Cornelius was very clear: this was going to be his vision. It was going to celebrate the diversity of blackness. It was going to celebrate the vitality of blackness. And it was going to be available to folks in the mainstream,” says Duke University Professor Mark Anthony Neal, who also reflects on the recent deaths of Whitney Houston and the Grammy Award-winning R&B singer, Etta James. [includes rush transcript]

Web ExclusiveJan 31, 2014VIDEO: Pete Seeger Recalls the 1949 Peekskill Riot Where He And Paul Robeson Were Attacked

AMY GOODMAN: I wanted to turn now to Don Cornelius. In 1974, he spoke to legendary African-American singer and songwriter James Brown on Soul Train about the violence in black communities in the United States. Al Sharpton, then only 19 years old, also presented an award to Brown for giving a voice to young black Americans. Talk about just who Don Cornelius was.

MARK ANTHONY NEAL: Don Cornelius is a Chicago guy. You know, he was a beat police officer, walked the streets. He worked in newspapers in Chicago. And of course, he got his start in radio at WVON, “The Voice of the Negro.” And, you know, he understood the power of black music. In some ways, you know, there’s no Soul Train without the success of labels like Motown and Stax in the 1960s, you know, which showed everybody there was an interest and a desire to consume black musical culture, you know, from the mainstream, white America, in particular. You know, Berry Gordy was always clear: you know, Motown was “the sound of young America,” not just black America.

But Don Cornelius understood a couple of things: one, the idea of visualizing the power of that culture, and also trying to find a space for black youth culture to be able to articulate itself. So, in the early days of Soul Train, I mean, the genius of the show was that it had very much a local feel. So, to highlight the dances of what black kids were doing in places like Philadelphia or Detroit and Chicago, black culture was still very much regional in the late 1960s and the early 1970s when Don Cornelius begins Soul Train. And one of his great successes is that, by the 1980s, when we see the rise of someone like Whitney Houston or Michael Jackson, there is a national black culture, right? No one thought of them as regional artists, right? They were national artists, and, of course, you know, international artists within that same context.

What was also important about Soul Train was that Don Cornelius understood the power of black independent media. He did it himself, you know, had his little bit of money and put together, got support, to be able to do what he wanted to do. Soul Train was always his vision, always his editorial content—the idea of a scramble board, which was his little way to nudge folks to think, right, to be thinking folks, in the context of also celebrating African-American styles and clothing, etc.

AMY GOODMAN: I want to go to that clip that features, on Soul Train, James Brown and a 19-year-old Al Sharpton.

DON CORNELIUS: We were talking earlier about some of the violent things that have been happening in our communities. And I’m sure you’ve been exposed to some of it, because you seem to always play for black audiences. Do you have any observations or concerns about that?

JAMES BROWN: Well, I do. The things that I observed and the things that I think it would be most helpful is the fact that we’ve got to get away from being—taking crime in the black community, keeping it in the black community—in other words, black-on-black crime, blacks killing blacks. That’s got to be the worst thing ever happened, because all the things that people died for, like Dr. King and all the beautiful people and all the marches and the revolution movements, were in vain if we’re going to kill each other and look very bad in the sight of the man. The man that we’re looking out for, we’re also looking very bad in front of him, because like we are letting ourselves down by blacks killing blacks. Prevent blacks killing blacks, and I think the gang thing will come to an end pretty well, too.

DON CORNELIUS: We have a young man in the studio who I think is an astounding young brother because of his youth. He’s only 19 years old, and he’s accomplished a lot. And he’s here to make a presentation to James Brown. And we’d like to welcome him on. His name is Al Sharpton. How about it for Al Sharpton?

DON CORNELIUS: Al is the national director of—

DON CORNELIUS: And what do we have here?

AL SHARPTON: Well, we come to break tradition. We know that in the recording industry that they give a gold record to those that achieve a million-seller. But we view your million-seller Payback as a black record, because it is relevant and says many of the things that young blacks have tried to say and could not musically express in our own little way. And we feel The Payback is sort of like the theme song of young black America in 1974.

AMY GOODMAN: That’s a 19-year-old Al Sharpton and, before that, James Brown on Don Cornelius’s Soul Train. Whitney Houston, talking about TV host Don Cornelius when he died, told reporters, “I grew up watching Soul Train. I was privileged to perform on the show at the beginning of my career and on several more occasions. Don opened the door for many artists. He was a great pioneer.” Mark Anthony Neal, talk more about his significance in bringing Black Power to the mainstream.

MARK ANTHONY NEAL: You know, if we think about Black Power in ways that go beyond simply understanding it as a political movement, but this idea of black self-determination, of course black economics, and, you know, again, Don Cornelius was very clear: this was going to be his vision. It was going to celebrate the diversity of blackness. It was going to celebrate the vitality of blackness. And it was going to be available to folks in the mainstream. I mean, when you hear that language from Al Sharpton, it’s very clear, right? This was black American youth culture that was flourishing in mainstream America, you know, and this is a decade before the mainstream would know anything about hip hop.

One of the really important features of Soul Train is that, you know, because Don Cornelius had a wide view of what black musical culture was, there were many acts that would show up on his show that never had a chance to be on Dick Clark’s American Bandstand, were never going to be on Late Night with Johnny Carson. He gave them a space to exist. When you go to the late 1980s and you start to see groups like Run DMC and Public Enemy, LL Cool J, on Soul Train, you know, these were folks, in the 1980s, they weren’t on MTV, despite what we think about MTV today. You weren’t going to find these acts on MTV. They were not going to be on late night shows. They were not going to be on American Bandstand. Don Cornelius provided a space for them to do what they were going to do to represent, you know, what black America was, and particularly young black America was. And he was also astute enough to know that when he needed to remove himself from that scene, to bring in younger hosts—you know, kind of a revolving door thing—but he brought in younger hosts that spoke to the idea that there was still some vitality in what he was presenting, and he just needed to manage it from behind.

AMY GOODMAN: Let’s talk about Etta James for a moment. She was honored last night by Alicia Keys, as well as Bonnie Raitt, as they sang her song. Talk about her significance. She died in January.

And what’s the amazing story about Etta James is that, you know, this is a woman who had a second and third and multiple acts—you know, to come back from drug addiction, to come back from obscurity, you know, so that by the time that we see the election of President Obama, you know, everyone knows who Etta James is because of her song “At Last.” It’s an incredible story. And the fact that she was celebrated the way that she was, you know, upon her death, speaks volumes about the vitality of her music, the legendary aspect of her performance and her voice. And of course, you know, when you see, you know, acts like a Bonnie Raitt or Alicia Keys, you understand that she was really incredibly influential in an era that produced incredible black voices, you know, whether we’re talking Aretha Franklin, Dionne Warwick, Patti LaBelle, you know, all these folks who were products—Diana Ross—all these folks who were products of this explosion of black musical culture in the 1960s.

AMY GOODMAN: Well, we’re going to end with Etta James singing “At Last.” I want to thank you very much, Mark Anthony Neal, for joining us, head of—a professor at Duke University, professor of black popular culture in the Department of African and African American Studies there, speaking to us from Madison, Wisconsin, where you’ve traveled to, also the host of the weekly webcast called Left of Black, blogging at NewBlackMan.blogspot.com, author of a number of books, including What the Music Said: Black Popular Music and Black Public Culture and Songs in the Keys of Black Life: A Rhythm and Blues Nation. We turn now to the late, great Etta James, the Grammy Award-winning R&B singer, singing one of her most famous songs, called “At Last.”

ETTA JAMES: [singing “At Last”] At last
My love has come along
Oh yeah, babe
Oh, and my lonely days, they’re over
And life is like a song 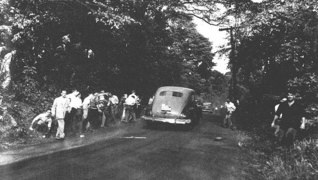