Supreme Court to Decide Whether U.S. Corporations Can Be Sued for Abuses Overseas

The U.S. Supreme Court will hear oral arguments Tuesday on whether U.S.-based corporations can be sued in U.S. courts for human rights abuses committed overseas. The case involves nine Nigerian activists, including Ken Saro-Wiwa, executed for protesting Royal Dutch Shell. We’re joined by Marco Simons, legal director of EarthRights International, which filed a “friend of the court” legal brief in this case and has been a pioneer in using the Alien Tort Statute to sue corporations for human rights abuses in Burma, Nigeria, Colombia and other nations. Some legal analysts are comparing the case to the landmark campaign finance ruling in Citizens United, which found that corporations have broad rights under the First Amendment and can directly fund political campaigns. “This case is really about whether a corporation that participates in serious human rights abuses, such as crimes against humanity or genocide or state-sponsored torture, can profit from those abuses and shield those profits from the victims when the victims come to take them to court,” Marco says. [includes rush transcript]

JUAN GONZALEZ: The Supreme Court will hear oral arguments Tuesday on whether corporations can be sued in U.S. courts for human rights abuses committed overseas. The case centers on a lawsuit that accuses the oil giant Shell’s parent company, Royal Dutch Petroleum, of complicity in the murder and torture of Nigerian activists. In 1995, nine Nigerian activists, including Ken Saro-Wiwa, were executed by the Nigerian military government for protesting Shell’s exploration and development in the Niger Delta. The families of the seven Nigerians killed are seeking to hold Shell liable under a 1789 U.S. law called the Alien Tort Statute. A separate suit involving Ken Saro-Wiwa’s family was settled in 2009, when Shell agreed to pay $15.5 million.

AMY GOODMAN: Some legal analysts are comparing this case, Kiobel v. Royal Dutch Petroleum, to the landmark campaign finance ruling in Citizens United. In 2010, the Supreme Court ruled corporations have broad rights under the First Amendment and can directly fund political campaigns. The Court is now being asked to decide if corporations have the same responsibilities as individuals for violations of international law. The Court’s ruling will also impact numerous other human rights cases being heard by lower courts.

Joining us in Washington, D.C., is Marco Simons, legal director of EarthRights International. EarthRights has filed a “friend of the court” brief in this case and has been a pioneer in using the Alien Tort Statute to sue corporations for human rights abuses in Burma, Nigeria, Colombia and other countries.

Marco, explain the significance of the Supreme Court hearing the oral arguments on Tuesday.

So, a corporation that engages in slave trading, for example, that traffics in persons, that retains the profits of all those activities, they can shield the profits from their victims. They wouldn’t be reachable in U.S. federal court. And we think that whatever you think about the Citizens United ruling, whether it was correct or not, it should be clear after that ruling that if corporations have rights on the same basis as human beings, then they should have responsibilities, as well. And one of those responsibilities is to respect human rights worldwide.

JUAN GONZALEZ: Now, this case is also being heard by the Court in tandem with another case, Mohamad v. The Palestinian Authority. Could you talk about that one?

MARCO SIMONS: Sure. The Mohamad case was filed under a related statute, which is known as the Torture Victim Protection Act. The Alien Tort Statute allows foreigners to come into U.S. courts to vindicate their rights. The Torture Victim Protection Act was passed by Congress in 1992 to allow U.S. citizens similar rights to sue for torture and extrajudicial killings. In this case, the victim was a U.S. citizen who was tortured and killed by agents of the Palestinian Authority and the PLO in the West Bank. And the issue in that case is whether organizations, including corporations, but in this case the Palestinian Authority, whether organizations can be sued under the Torture Victim Protection Act. So it presents the question of whether U.S. citizens will enjoy similar rights to aliens or foreigners, when they come into court to sue corporations for human rights abuses such as torture and extrajudicial killings.

AMY GOODMAN: Can you explain, Marco Simons, exactly what the Nigerian case is, the case of the nine Nigerian rights activists in 2000—in 1995, who were executed by the Nigerian military, and what that had to do with Shell?

MARCO SIMONS: Yeah, this case arose out of a conflict in the Niger Delta in the early to mid-1990s, where the Ogoni people, an ethnic group in the Niger Delta, organized a nonviolent protest movement to oppose the practices of Shell, which had been drilling oil in their lands in a very environmentally destructive manner for decades. And the Ogoni protested this environmental destruction and the economic disruption that oil development on their lands had caused. And the response from both Shell and the Nigerian government, which was a brutal military dictatorship at that time, was a very violent response.

The allegations in this case are that Shell paid the Nigerian military, that they called in the Nigerian military to respond to peaceful protests, knowing full well that extremely violent reactions would occur, and that they specifically participated in this trial against these nine Ogoni activists, including Ken Saro-Wiwa and Barinem Kiobel, whose family are the lead plaintiffs in this case at the Supreme Court. And they actually bribed witnesses against Dr. Kiobel and Ken Saro-Wiwa in order to ensure that they were convicted in this trial that was condemned internationally by all kinds of world leaders, including the U.S. president, Bill Clinton, at the time, and the British prime minister, and that ultimately led to the execution of these activists. And so, Shell is—

AMY GOODMAN: I wanted to turn for a moment to Ken Saro-Wiwa himself, in his own words. In 2009, oil giant Shell reached an out-of-court settlement with the family of the executed Nigerian writer/environmentalist for $15.5 million. The landmark trial investigated Shell’s alleged involvement in human rights violations in the Niger Delta, including its complicity in Saro-Wiwa’s torture and execution. He was a famous writer in Nigeria, founding member and president of the Movement for the Survival of the Ogoni People, or MOSOP. I got a chance to interview him, along with WBAI’s Bernard White, back in 1994 and 1995, when he came to the United States before he returned to Nigeria, was arrested and then killed.

KEN SARO-WIWA: Shell does not want to negotiate with the Ogoni people. Each time they’ve come under pressure from local people, their want has always been to run to the Nigerian government and to say to the Nigerian government, “Oil is 90 percent of your foreign exchange earning. If anything happens to oil, your economy will be destroyed. Therefore, you must go and deal with these people, these troublemakers.” And most times, the government will oblige them and visit local communities of poor, dispossessed people with a lot of violence.

And when these communities then protested and said, “Look. Look at the amount of violence that is being used against us, even though we are only protesting peacefully,” then the oil companies will come and say, “Well, there is no way we can determine how much violence a government decides to use against its own people.” So, basically, the local communities have no leverage with the oil companies at all.

AMY GOODMAN: That was Ken Saro-Wiwa on Pacifica Radio station WBAI in New York, just before he returned to Nigeria, was arrested, tried with eight other minority rights activists, and was executed on November 10, 1995. Marco Simon, final comment about the significance of the Supreme Court hearing of the oral arguments on Tuesday?

MARCO SIMONS: Yeah, the significance is simply this: if you are violating human rights, is it really the case that all you need to do in order to shield your profits from the victims is to form a corporation? Because that really seems to be contrary to the basic principles that we hold dear in this country and around the world.

AMY GOODMAN: And the connection between Royal Dutch Shell and Shell Corporation here in the United States?

AMY GOODMAN: Marco Simons, legal director of EarthRights International, thanks so much for being with us. 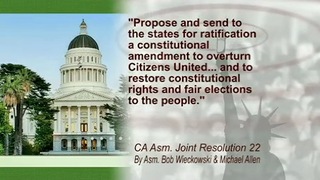