As Students Revolt over Cutbacks and Debt, NYC Occupy Stages May Day “Free University” for the 99%

In New York City’s Madison Square Park, hundreds of people attended a “Free University” hosted by Occupy Wall Street, where professors gave free classes to May Day protesters. Activists said the event marked an alternative means of sharing knowledge outside the capitalist system. “This movement is all about building community and sharing and coming up with alternatives to the economic system that’s so pervasive in our lives in everything that we do,” said Amin Husain, a key facilitator for the Occupy movement, who attended the event. “These are cracks in capitalism, where we can actually give and take on our terms,” he added. Ruthie Wilson Gilmore, a professor and co-founder of the prison abolitionist group Critical Resistance, brought her class from the City University of New York to the action. “May Day is the day in which we rise up and say we should be free, which means we should control the means of production so that we can have all the say possible in how we reproduce ourselves,” said Gilmore. “Studying policing and studying capitalism and studying racism is a way toward figuring out how to change the future.” [includes rush transcript]

NERMEEN SHAIKH: There were many events in New York City’s parks. In Madison Square Park, Occupy Wall Street hosted a “Free University,” where professors gave free classes to May Day protesters. Democracy Now!’s Mike Burke spoke to some of the participants.

EILEEN MYLES: My name is Eileen Myles, and I’m a poet. And I’m out here because—because it’s been an overwhelming year in which we’ve all realized that we have to do something, and it’s become an opportunity, through the whole Occupy movement, to stand up and say that the conditions in this country and in the world are impossible. And so, we can stand together as a group for once.

And so, as a poet, I’m taking the opportunity both, for myself, to actually not read poems today and to not write poems today, and to kind of resist poetic labor, which I take entirely seriously. But as it happens, I teach a class at Columbia called avant-garde poetry. And so, we had to make up a class, and we looked as a group to see how we could take part in May Day. And so, Occupy organized a May Day educational day, in which people who are doing similar things to us met and talked about, you know, possibilities of resistance in education and new ways of dealing with education as a people. But what’s interesting is we came to all the different groups, and none of them seemed to totally be like us or for us.

And I had encouraged everybody to bring a poem. So we decided to do—you know, to do the human microphone and to just share poetry with everybody. And so, that’s what we’ve been doing for a couple hours. And it’s kind of amazing, because people are just jumping up on the bench and taking part, and people are reciting poems that they know by heart. And people who do rap are standing up and getting us to do call and response with that. So it’s been kind of incredible.

MIKE BURKE: Can you talk about the importance of poetry in a movement like Occupy Wall Street?

EILEEN MYLES: Oh, I think it’s primary. I mean, I think poetry is the kind of untrammeled, unedited kind of, you know, whatever human—I mean, the one thing humans do that does make us different from animals is that we have language. And so, I think poetry, weirdly, is like the first language and the last one, you know? I think when language was being invented, I think it was poetry before it was anything else. It was kind of religious and shaking and chanting. And I think when languages are dying, often, the last old person that knows the language is reciting a poem. So, it’s sort of like—I think it’s deeply embedded, even in our genes.

And poetry, you know, whenever there have been—you know, like, poetry, I think for the past 20 or 30 years, has been sort of regarded as a little, you know, non-techno—not seen as a media on its own. But if we think of the ’50s and ’60s and ’70s, with all kinds of liberation movements, it was always—there was always, you know, Allen Ginsberg and Judy Grahn and, you know, Amiri Baraka, standing in the front of the crowd and reciting poems. Poets were always kind of the human statue giving voice to a lot of needs.

And so, what’s been really cool with the Occupy thing is down on—you know, like last fall, on rainy nights, on Friday nights at 9:00, there was a crowd, which was the General Assembly, but there was always—there was also a poetry crowd. And, you know, rainy nights, and tons of us, we would just be showing up with poems and getting this treatment, which is the oldest way that poetry is ever treated, which is that it’s a human chorus, you know, so it’s—I think we’re all getting the opportunity to see how it really works.

AMIN HUSAIN: My name is Amin Husain, and I’m with the direct action working group. And I’m on Occupy Theory, too, and Tidal, the magazine that gets issued, and other stuff. But I’m here because, you know, it’s a free university. I think this movement is all about building community and sharing and coming up with alternatives to the economic system that’s so pervasive in our lives in everything that we do. These are cracks in capitalism, where we can actually give and take on our terms. And it’s in a way where we—where people generally could be loving and sharing. And you don’t have to, you know—if you don’t have a cent, and you’re at the store, you feel like you can’t buy stuff. Here you can get the type of education that costs thousands and thousands of dollars. And I think that exposes the valuation thing in our society. Everything is commodified. Education, knowledge is commodified. And I love the fact that this is free and not that way, and people can learn from each other on a horizontal level.

RUTHIE WILSON GILMORE: My name is Ruthie Wilson Gilmore. I’m a professor at the Grad Center at CUNY. I’m also the co-founder of a number of prison abolitionist organizations, most famously, I guess, Critical Resistance: Beyond the Prison Industrial Complex.

MIKE BURKE: And why are you out today here on May Day?

RUTHIE WILSON GILMORE: Well, I support the strike, power to the people. And also, I brought my class down here, my grad seminar, to conduct our discussion today. We’re studying “Policed,” with a capital P, the condition of being policed, the history of policing in the modern world, its relationship to things like slavery, inequality, migration, jobs, labor, you name it.

MIKE BURKE: And how does that tie into the May Day protests?

RUTHIE WILSON GILMORE: Well, it ties in in every possible way. To me, May Day is the day in which we rise up and say we should be free, which means we should control the means of production so that we can have all the say possible in how we reproduce ourselves. So, studying policing and studying capitalism and studying racism is a way toward figuring out how to change the future.

MIKE BURKE: And what are your thoughts on the New York Police Department’s handling of the Occupy Wall Street protests and also how it fits into the broader picture of NYPD policing of the city?

RUTHIE WILSON GILMORE: NYPD policing in the city is out of control. The “stop and frisk” policing, which came into being some time ago in the so-called “broken windows” policing, is only a way to push down and keep down modestly educated women and men, including kids, in the prime of life, who otherwise would, in a better economy, make their livings making, moving, growing and caring for things and people.

MIKE BURKE: And what advice do you have to Occupy Wall Street protesters today?

MIKE BURKE: On any particular issues?

RUTHIE WILSON GILMORE: All of the issues. All of the issues—debt bondage, fighting for jobs, fighting against capitalism, fighting against racism, fighting against transphobia, fighting against sexism. There are all these things to fight against. And one of the things that has me extremely enthusiastic, when I look both at the United States and at the rest of the world, is that more and more people are rising up in more and more ways to connect the issues of inequality, oppression and liberation in a way that doesn’t reduce, for example, anti-capitalist to “if you’re not working in a factory, you’re not, you know, a member of the working class,” that kind of thing. So all of the things that we’ve learned over the decades reading people like Cedric Robinson’s magisterial book, Black Marxism, reading the work from the Wages for Housework people, reading the workers’ literature, and particularly paying close attention to work like Vijay Prashad’s The Darker Nations and what has happened on most of the planet, gives us the opportunity and the responsibility to use this thinking and link our struggles.

NERMEEN SHAIKH: Ruthie Gilmore, professor and writer, one of the founders of the prison abolitionist group Critical Resistance. Before that, Occupy organizer Amin Husain and poet Eileen Myles.

AMY GOODMAN: If you’d like a copy of today’s show, you can go to our website at democracynow.org. There, you can also read today’s show, listen to the show, and you can send it around. Tell your friends about Democracy Now! On Thursday, we’ll be speaking with Guardian investigations editor David Leigh in London about the British parliamentary report that found Rupert Murdoch not fit to run a major media company. In a letter Tuesday, Citizens for Responsibility and Ethics in Washington called on the FCC to revoke News Corp.’s 27 Fox broadcast licenses. 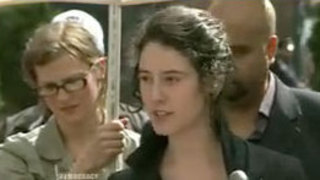