In a groundbreaking decision, the First Circuit Court of Appeals has struck down part of the Defense of Marriage Act (DOMA), ruling the federal government can’t deny benefits to same-sex couples in states such as Massachusetts where same-sex couples can legally marry. The ruling will likely now be appealed and be brought before the Supreme Court. We speak to Marc Solomon, national campaign director of “Freedom to Marry,” one of the leading campaigns to overturn DOMA. [includes rush transcript]

AMY GOODMAN: We move on now to talk about the issue of same-sex marriage. In a groundbreaking ruling on Thursday, the First Circuit Court of Appeals struck down part of the Defense of Marriage Act, known as DOMA. In a unanimous decision, the appeals court ruled the federal government does not have the authority to deny benefits to same-sex couples in states such as Massachusetts, where same-sex couples can legally marry.

DOMA, which was signed into law by President Clinton in 1996, prevents same-sex married couples from filing joint federal tax returns. It also prevents a same-sex spouse from collecting Social Security survivor benefits and prevents federal employees from sharing health insurance and other benefits with a same-sex spouse.

ATTORNEY GENERAL MARTHA COAKLEY: It is unconstitutional for the federal government to create a system of first- and second-class marriages, and it does harm to Massachusetts and families in Massachusetts every day. In affirming Judge Tauro’s district court decision striking down the Defense of Marriage Act, the First Circuit emphasized that DOMA is a law that both discriminates against a historically disadvantaged group, and it also intrudes in an area where state regulation has traditionally governed. Both of those factors are important to understanding the court’s decision today.

AMY GOODMAN: Thursday’s ruling will likely now be appealed and be brought before the Supreme Court. Notably, two members of the three-judge panel are Republican appointees. On Thursday, White House Press Secretary Jay Carney responded to the court ruling.

PRESS SECRETARY JAY CARNEY: The President has concluded that Section 3 of DOMA is unconstitutional. So has his Attorney General. And for that reason, the administration will no longer defend equal protection challenges against it in the courts. That’s a position the president has held for some time now, and it has been enforced by the Department of Justice. With regards to this ruling, which the DOJ was an active participant in, I would refer you to the Justice Department. But there’s no question that this is in concert with the president’s views.

AMY GOODMAN: For more, we’re joined by Marc Solomon, national campaign director of Freedom to Marry, one of the leading campaigns to overturn DOMA, known as the Defense of Marriage Act.

Welcome to Democracy Now!, Marc. Talk about the significance of this ruling.

MARC SOLOMON: Well, it’s very significant to have a three-judge panel unanimously rule that, as Attorney General Coakley in Massachusetts said, there are no first-class and second-class marriages, and that the—you know, the role of the—it’s really up to the states to determine who is married, and the federal government needs to respect those marriages that take place in the states.

AMY GOODMAN: And so, what happens next?

AMY GOODMAN: And where does the Obama administration stand? I mean, wouldn’t they have to defend this in order to appeal it to the Supreme Court, the decision?

MARC SOLOMON: In fact, the Obama administration has said that, no, this law is unconstitutional, and they won’t defend it. So, what’s happened is that the House of Representatives has taken on the defense of this truly indefensible law, and they will represent the U.S. government under this appeal.

MARC SOLOMON: There’s a mix. We have marriage equality in six states; six states recognize marriages. Two additional states just passed marriage laws. The governors—Maryland and Washington state just passed same-sex marriage laws. And there will be votes on those laws this November. Maine is going to the ballot in support of a freedom-to-marry law this November. So, it’s a mixture. What we know, though, is that we have solid majority support nationwide now. And this is just another huge piece of momentum in favor of the freedom to marry nationwide.

REPORTER: But the question, though, is whether you would take your current somewhat passive position that you will not defend it and turn that around and actively argue for—to overturn the law.

PRESS SECRETARY JAY CARNEY: The Department of Justice participated in this very litigation in the First Circuit, consistent with the position that the president and the attorney general have articulated, which is that they do not believe that Section 3 of DOMA is constitutional. I can’t predict what the next steps will be in handling cases of this nature. I would refer you to the Department of Justice. But I wouldn’t necessarily call that passive.

MARC SOLOMON: I think that the—you know, the administration is doing the absolute right thing by saying that the Defense of Marriage Act is unconstitutional. I think it’s a shame that—you know, in this case, it was a majority ruling. Two of the three judges were Republican appointees. It’s a shame that the House of Representatives looks like it’s going to appeal this decision to the U.S. Supreme Court.

MITT ROMNEY: States are able to make decisions with regards to domestic partnership benefits, such as hospital visitation rights. Benefits and so forth of various kinds could be determined state by state. But my view is that marriage itself is a relationship between a man and a woman, and that’s my own preference. I know other people have differing views. This is a very tender and sensitive topic, as are many social issues. But I have the same view that I’ve had since—well, since running for office.

MARC SOLOMON: I think it’s really a shame that Governor Romney can’t recognize that committed and loving gay and lesbian couples, who have now been married in his home state of Massachusetts for eight years, don’t deserve the freedom to get married, and that he’s not recognizing that it’s only been a good thing for Massachusetts and for the other states where gay couples can marry, and that nobody has been harmed at all.

KALIL COHEN: Well, I’ve been active in the movement to establish same-sex marriage as a trans activist with Trans Equality L.A., which was a group here in L.A. that was advocating for marriage. But I think my biggest concern is how much resources in the LGBTQ movement have been funneled towards marriage equality alone, and away from basic survival that a lot LGBTQ people still face, such as lack of access to education, healthcare, housing and criminal justice reform. And these are issues that have really taken a backseat to marriage equality, and that has harmed the most vulnerable members of our community, and whereas marriage equality is what’s helping the people who are already doing OK, who are mostly affluent, mostly white gay and lesbian folks.

MARC SOLOMON: Well, I would dispute the idea that marriage is helping only the affluent. Marriage is important to gay and lesbian couples across the economic and racial, ethnic spheres. And it’s something that’s really—I’ve seen capture the imagination and the passion of the gay community in a way that nothing else has, because it really is a matter of being respected by their government, being treated as equal by their government across the board. So, I think—I also think that it’s—we don’t need to pit one cause, one matter of equality, against another. I think we need to be working together to secure equality across the board for gay and lesbian Americans.

AMY GOODMAN: Well, I want to thank you very much, Marc Solomon, for being with us, national campaign director of Freedom to Marry, one of the leading campaigns to overturn DOMA, the Defense of Marriage Act, that was passed under President Clinton in 1996. This is Democracy Now! We’ll be back in a minute. 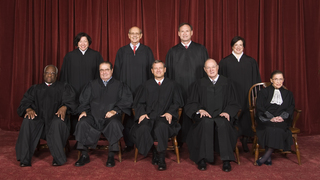