Today a Democracy Now! special on the life and death of Ramarley Graham, a teenager who was shot dead by a New York City police officer inside his own bathroom in the Bronx on February 2nd. Graham, 18, was shot at close range after narcotics detectives barged into his home. New York police officer Richard Haste was indicted on manslaughter charges for the fatal shooting last week. At a weekly vigil held by the Graham family outside their home, we hear from Ramarley’s older sister, Leona Virgo, and his father, Frank Graham. [includes rush transcript]

StoryJun 19, 2012Ramarley Graham’s Mother Speaks Out: NYPD Cop Who Killed My Son Should Be Charged with Murder

AMY GOODMAN: I’m Amy Goodman, host of Democracy Now! We’re here in the Bronx on East 229th Street at the home of Ramarley Graham. Today, as every Thursday, people are gathering to remember him and to protest police violence. There’s a T-shirt right here hanging on the gate that says, “Rest in Peace,” with the picture of Ramarley, and it says, “Ramarley Graham, Gone Too Soon, Sunrise April 12, 1993, Sunset February 2, 2012.”

AMY GOODMAN: Today, a Democracy Now! special on the life and death of Ramarley Graham, a teenager who was shot dead by a New York police officer inside his own bathroom in the Bronx. His death occurred on February 2nd, three weeks before Trayvon Martin was shot dead in Florida by George Zimmerman, the self-appointed night watchman. Trayvon was 17 years old, Ramarley 18. While Trayvon Martin’s death gained international attention, the Ramarley Graham killing received far less attention.

Police initially said Graham ran into his building fleeing from officers, but surveillance footage showed this to be untrue. New York Police Commissioner Ray Kelly initially said Graham, quote, “appeared to be armed,” but no weapon was ever recovered. Ramarley’s grandmother and six-year-old brother were inside the apartment at the time the police killed him.

Last week, a New York police officer was indicted on manslaughter charges for the fatal shooting. The officer, Richard Haste, pleaded not guilty to charges of first- and second-degree manslaughter in a Bronx courtroom. He was released on $50,000 bail.

Last Thursday, Democracy Now! covered a vigil held by the Graham family outside their home in the Bronx. I spoke to Ramarley’s older sister, Leona Virgo. I began by asking her to describe her brother Ramarley.

LEONA VIRGO: Marley was very different from the other brothers. He was into slow jams. He knew how to cook. He taught me some things about cooking. Everybody knows that I’m not a cooker, but Marley is. He even showed me how to make milkshakes and just like little weird things that people wouldn’t really do at home.

When we were younger, we used to always get in trouble. We was always doing something, if it wasn’t me bothering him, provoking him to do certain things, and us getting in trouble by our mother. And there always was laughs after, always jokes. We played a lot of video games together coming up. Our favorite was Halo for the Xbox. And even before the Xbox, there was Super Nintendo, and it was Mario Brothers.

So, we did a lot of, you know, sister and brother activities. My momma’s fun was our fun. Wherever she went, we were right there with her, tagging along. Even when I would go to the courts, he was right there tagging along. Even though he didn’t know how to play basketball, he wanted to be around me and just catch on to the game.

LEONA VIRGO: He’s my little—four years younger, but he, at times, seemed like an older brother. Like, even though he’s my little brother, I always called him my older brother. That’s just how he was. He was very, you know, mature for his age. And a lot of people realized that, you know, the more they was around him. He used to really amaze me how observant he was. Like, I secretly idolized him. I never told him, you know, when he was alive, and I wish I would have told him. You know, things happen, so…

AMY GOODMAN: Can you tell me about the picture that is in the pin that you’re wearing, and what does it say?

LEONA VIRGO: The pin says, “I am Ramarley. You see my hands. No gun. Why did you shoot?” Every Thursday, we hold this, you know, vigil in Ramarley’s name, 18 Thursdays to represent his 18 years of life living on this earth. We do it on a Thursday because he was killed on a Thursday. So we ask, you know, for anybody to come out and, if you do come out, to bring two people with you, at least, just to support the cause, because at the end of the day, even though he’s gone, it could happen to someone else. And all we’re trying to do is prevent that from happening and to shed light on this situation here, because it does occur every day, and sometimes the stories do get unheard. But we’re not going to let that happen in our situation, because they want us to forget, but we’re not going to forget, you know?

AMY GOODMAN: Ramarley Graham’s older sister, Leona Virgo. In the evening, Ramarley’s dad, Frank Graham, addressed the crowd who had gathered for the weekly vigil in memory of his son.

FRANK GRAHAM: As [inaudible], this one is different, and they messed with the wrong set of people. We’re not going to stop. No justice!

AMY GOODMAN: Frank Graham, father of Ramarley, shot dead inside his apartment by the New York police. When we come back, I speak with Ramarley Graham’s mother and a retired New York police officer, as well as her lawyer. Stay with us.

Ramarley Graham’s Mother Speaks Out: NYPD Cop Who Killed My Son Should Be Charged with Murder

NEXTRamarley Graham’s Mother Speaks Out: NYPD Cop Who Killed My Son Should Be Charged with Murder 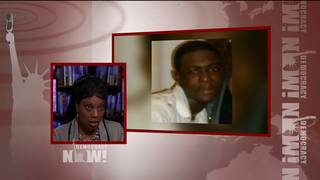 Ramarley Graham’s Mother Speaks Out: NYPD Cop Who Killed My Son Should Be Charged with Murder