As European leaders scramble to address the sovereign debt crisis, Nobel Prize-winning economist Joseph Stiglitz argues the austerity measures pushed by Germany, the United States and international creditors are only “going to make the countries weaker and weaker.” If European economies contract, Stiglitz predicts that “our economy is going to go down further into the hole. … Those policies then increase the probability of our weak economy tipping over into recession.” Stiglitz’s new book is “The Price of Inequality: How Today’s Divided Society Endangers Our Future.” Click to see parts 1 and 3 of this interview. [includes rush transcript]

NERMEEN SHAIKH: Joseph Stiglitz, you have spoken about the austerity measures that have been imposed across Europe or that are being considered across Europe, and you’ve said that they’re, quote, “a suicide pact.” Can you say what you mean by that?

JOSEPH STIGLITZ: Well, in Europe, these measures of austerity are going to make the countries weaker and weaker. I predicted that when Europe began that back in 2010 in Greece, when the Greek crisis first emerged. What’s happened is, Greece has become successively weaker and weaker, to the point where the youth unemployment now is 50 percent, political turmoil is breaking out. I said the same thing when Spain began that process. And now in Spain the youth unemployment rate is again 50 percent, and the unemployment overall has gone well over 20 percent. And just yesterday, you know, Spain’s conservative government has said, “We can’t deal with it,” even though they had run on a platform of, “Oh, you’ve messed up with the economic policy.”

So, the point is that we’ve done this experiment in austerity over and over again. The first example, you might say, in modern history was Herbert Hoover when he responded to the stock market crash by austerity, under the influence of his Secretary of the Treasury Andrew Mellon, and we had the Great Depression. The IMF forced it in East Asia, in Korea and Thailand, in Indonesia, and we all—and we saw the consequences: the economies went down. Why Europe is repeating this experiment, where we know almost for certain what the outcome is—and it’s turning out to be exactly as I predicted.

AMY GOODMAN: I mean, is it only Europe? Let’s turn to the federal budget here. Republicans, who control the House, have been calling for cuts to food aid, healthcare, other social services, while protecting funds for the Pentagon. This is House Budget Committee Chair Paul Ryan speaking last month.

REP. PAUL RYAN: What we’re saying is, let’s get on growth and prevent austerity. The whole premise of our budget is to preempt austerity by getting our borrowing under control, having tax reform for economic growth, and preventing Medicare, Social Security and Medicaid from going bankrupt. That preempts austerity. The president, his budget, the fact the Senate hasn’t done a budget in three years, puts us on a path toward European-like austerity. That’s what we’re trying to prevent from happening in the first place.

JOSEPH STIGLITZ: Well, the good thing about what he said is austerity is finally getting a bad name. Then the question is, what are the policies? And what he is proposing is weakening our basic economic fiber. If you don’t invest in education, technology, infrastructure—

AMY GOODMAN: Where do you get the money?

JOSEPH STIGLITZ: —the economy gets weaker. Well, the good news is that right now the markets are willing to lend to the U.S. at essentially zero interest rate, long-term interest rates of one-and-a-half percent. You know, if you were a business and you could borrow at one-and-a-half percent or zero for investments with very high returns, you would be foolish not to do it. The right keeps focusing on just one side of the country’s balance sheet or the government’s balance sheet: what they owe. They don’t look at the other side: the assets. And it’s the assets that are really important if we’re going to have long-term economic growth. So, it’s like a company that says, “Let’s cut out our R&D budget. Let’s cut out all our investment.” And you know where that company’s going to go? It’s going to go into the tubes. And that’s his recommendation for America. I think that’s wrong. It’s not the way you’re going to get growth.

NERMEEN SHAIKH: Yeah, you’ve also said that if Romney, if the Republicans win the elections in November, that that would significantly raise the likelihood of a recession.

JOSEPH STIGLITZ: Well, the Republicans have been consistently focused on cutbacks. You know, Americans don’t realize that we already have begun austerity. There are about one million fewer public sector employees than there were before the crisis. The standard recommendation of macroeconomics, of economic, is that when the private sector gets weak, government is supposed to step in, fill the breach and stimulate the economy so that the economy is stabilized, because the private sector is very volatile. But we’ve been doing just the opposite. As the private sector has gotten weaker, we’ve cut out a million jobs. What the Republicans would do is make those cutbacks even bigger. And the result—and Wisconsin is an example—you know, more cutbacks, more cutbacks of public employees. And the result of that is our economy is going to go down further into the hole. In the context of Europe very likely going into turmoil, there is going to be a risk of a significant downturn. And those policies then increase the probability of our weak economy tipping over into recession.

AMY GOODMAN: Joe Stiglitz, yesterday every single Republican in the Senate voted against the Paycheck Fairness Act, so it cannot move forward. Explain what this act is, the significance of this for working women.

JOSEPH STIGLITZ: Well, this is one of the issues that I take up in my book, not the particular bill, but—what is distinctive about American inequality is that too much goes to the very top—that’s the 1 percent—the middle has been hollowed out, and the bottom is not—is doing very badly. The number in poverty are increasing. Well, when you look at what’s happening at the middle and the bottom, one of the factors that contributes to weaknesses in the middle or the bottom is discrimination. Women get paid on average less than 80 percent of men of the same qualifications doing the same kind of work. You know, that’s discrimination. And that weakens the economic fiber of our country, and it creates more inequality. And this bill was an attempt to circumscribe that kind of discrimination. You know, things are better than they were 30 years ago. We’ve made progress. But what is clear, that in spite of our awareness of this kind of discrimination, we haven’t closed the gap. We have a lot more to do.

JOSEPH STIGLITZ: Very much so. And, you know, one of the aspects of the crisis, we now realize that the banks targeted Afro-American and Latinos for these predatory lending, bad loans, high transaction costs. And one of the consequences of that discrimination—and the banks have paid very large fines and settlements of claims against that kind of discrimination—the consequence is the wealth of those at the bottom who are Afro-American, who are Hispanics, Latinos, have been wiped out. And so, we had a bigger gap in wealth than the big—than the gap in income. You know, I mentioned that the top 1 percent gets 20 percent of all the income. They have about 40 percent of the wealth. You look at the wealth gaps in Latinos and Afro-Americans, it’s so much larger, and really unconscionable.

NERMEEN SHAIKH: And your comments on Occupy Wall Street? You write about that in your book, as well.

JOSEPH STIGLITZ: Well, Occupy Wall Street was a reflection of a lot of Americans’ perspective that our economic system is unfair. You know, the protest movement that began in Tunisia was partly about lack of jobs, but it was partly—I went to Tunisia—it was unfairness in our system. There was a hope, after the crisis, that government would fix things. It didn’t, or it didn’t do enough. And that combination of economic unfairness and a political system that doesn’t seem capable of correcting these injustices, I think, is what motivated a lot of the Occupy Wall Street.

AMY GOODMAN: I want to go to a clip of Bloomberg talking about Occupy Wall Street, saying Wall Street is a critical tax base for New York City. This is during his weekly radio address last October.

MAYOR MICHAEL BLOOMBERG: The protests that are trying to destroy the jobs of working people in the city aren’t productive. And some of the labor unions, the municipal unions, that are participating, their salaries come from the taxes paid by the people that they’re trying to vilify.

JOSEPH STIGLITZ: I think he’s 100 percent wrong. I mean, basically, the fundamentals of a democracy are that you want people to express their views. They had hoped that the politicians would hear their voice. They had hoped that the politicians would address the inequalities in our society, the lack of—the deficiencies in our—the deficiencies in our financial system. And what became increasingly clear was that money was driving politics, which is an important point that I raise in the book. Money shapes markets. Markets don’t exist in a vacuum. The way markets work is based on rules and regulation that come out of Congress. And when politics shapes those rules and regulations to help the 1 percent rather than to help the rest of our society, something is wrong. And what—the protest movement was out of frustration, a sense that the democratic politics didn’t reflect the view of the majority of Americans—you might say, of the 99 percent. And—

AMY GOODMAN: Do you want to see it grow bigger? You were down there at Occupy.

JOSEPH STIGLITZ: I think it’s very important that somehow we get a politics that reflects the interest of the majority of Americans. When we have a bankruptcy law, for instance, that says that first priority goes to derivatives, that encourages speculation in the financial markets. And when we have a bankruptcy law that says students cannot discharge their debt, no matter—even in bankruptcy, no matter how bad an education the for-profit schools give them, there’s something wrong.

AMY GOODMAN: We’re going to talk to you for a few minutes in post-show, put it online at democracynow.org, about what are the most important things to do right now. Nobel Prize-winning economist Joe Stiglitz, professor at Columbia University. The new book is The Price of Inequality: How Today’s Divided Society Endangers Our Future. 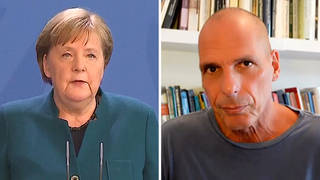