Eight American Muslims from New Jersey have filed a federal lawsuit calling on the New York City Police Department to stop its surveillance and intelligence-gathering program that targets Muslim and Arab communities. Under the controversial program, New York City police officers monitored the daily life of Muslims in the tri-city area and across the Northeast — including where people ate, prayed and even where they got their hair cut. We speak to Glenn Katon, legal director at Muslim Advocates, the group that filed the lawsuit. “When the NYPD says basically all Muslims are suspect, it seems clear to us that that violates equal protection of the law,” Katon says. [includes rush transcript]

JUAN GONZÁLEZ: A group of eight American Muslims from New Jersey has filed a federal lawsuit calling on the New York Police Department to stop its surveillance and intelligence-gathering program that targets Muslims. The lawsuit was filed Wednesday by the national organization Muslim Advocates. This is Executive Director Farhana Khera.

FARHANA KHERA: It is the first direct legal challenge by victims of the NYPD’s discriminatory surveillance program. In fact, this lawsuit, titled Hassan, et al. v. The City of New York, is perhaps a most important legal challenge to date brought by the American Muslim community to protect their rights in our nation’s founding values.

JUAN GONZÁLEZ: Under the controversial surveillance program, New York police officers monitored the daily life of Muslims in New York and across the Northeast, including where people ate, where they prayed, and even where they got their hair cut. A Pulitzer Prize-winning Associated Press investigation revealed that, beginning in 2006, police infiltrated dozens of mosques and Muslim student groups and investigated hundreds more.

Imam Deen Shareef, whose mosque was under surveillance, is a plaintiff in the lawsuit to stop the program.

IMAM DEEN SHAREEF: We are Muslims. We are Americans. And we go about our daily lives trying to establish the best kind of contribution that we can make to the American society. And for us to find out that we are now under suspicion with respect to some criminal activity, without any explanation as to what the provocation was, what the motivation is, what are the people that they’re looking for, it is very disturbing for us to find this out. And then to find out that the New York Police Department actually took photographs of our mothers, our children, and those individuals that come into our businesses has created an atmosphere where there is certainly an undue suspicion that has been cast upon the entire Muslim community.

AMY GOODMAN: The New York Police Department has yet to respond to the lawsuit. Last month, the New Jersey attorney general determined the NYPD’s activities there were legal. New York Police Commissioner Ray Kelly has said the surveillance is necessary in order to protect the city from terrorist attacks.

COMMISSIONER RAYMOND KELLY: We’re doing what we have to do, pursuant to the law, to protect the city, a city that’s been attacked successfully twice and had 14 plots against it in—you know, in the last two decades.

Glenn Katon, welcome to Democracy Now! Muslim Advocates is based in San Francisco, but you’re here. Talk about the significance of this suit and what you’re doing.

GLENN KATON: Well, we think it’s tremendously significant, because this is the first time American Muslims have challenged a broad-scale surveillance program. And there has been a lot of persecution, discriminatory treatment of Muslims in the post-9/11 era. But really, the revelation of these NYPD reports is the first time that we’ve seen, in such stark and disturbing detail, exactly what one government entity is doing. So, as those reports were revealed, I mean, people from the community were crying out that, you know, we’ve always sensed that we’re being treated differently, but this is kind of akin to smoking-gun evidence that there is a really concerted and very sophisticated effort to target Muslims based on their faith.

JUAN GONZÁLEZ: And in terms of your legal arguments, what constitutional violations are you alleging?

GLENN KATON: We have three constitutional claims. The first is the Equal Protection Clause of the 14th Amendment. Most people are familiar with that in the context of race discrimination, but the law is clear that it applies to certain protected classes, like race, religion, national origin. So when the NYPD says basically all Muslims are suspect, it seems clear to us that that violates equal protection of the law.

The other two constitutional claims are based on the religion clauses of the First Amendment. There is the Establishment Clause, which says that government cannot establish a religion. And the most common application of that provision of the Constitution is in the context of the government embracing or endorsing religion. So if the government—I mean, the famous cases are like the crucifix in the national park or the Christian version of the 10 Commandments on the courthouse steps. The flipside of that is that government also cannot denigrate or disfavor a particular religion. So when the policy of the NYPD is to treat all Muslims as suspects of what is traditionally criminal investigation types of activities, that disfavors the Muslim faith.

Lastly, we have the Free Exercise Clause of the First Amendment, which, when the government, again, targets religion in a way—or a particular religious faith in a way that interferes with people’s ability to worship and practice their religion, that violates the Free Exercise Clause. And we’ve seen, most recently, Tuesday, there was another NYPD document released that has kind of a spreadsheet of the types of infiltration that the NYPD is carrying out and lists Muslim Student Association, lists mosques, and has a little check for “Do we have an informant there?”, “Do we have an undercover officer there?” So, you know, how can people pray, talk to their imam, when the person standing next to them may be a cop?

JUAN GONZÁLEZ: Well, what about the argument of the police department that they are—that this is surveillance, that they are not actually targeting or prosecuting, all they’re doing is gathering information?

GLENN KATON: Well, their—yeah, I mean, the idea that, “Oh, we’re just in public places observing what anyone else could observe,” is really a fallacy for two reasons. First of all, nobody wants to think that they are being photographed as they go in and out of their place of worship. Nobody wants to think that people are watching them in their Halal restaurant. So, it’s an intrusion, even if it’s in a public place, number one.

AMY GOODMAN: This is Mayor Bloomberg speaking at Yale University after it was disclosed New York police officers had monitored students from Yale.

MAYOR MICHAEL BLOOMBERG: We have to keep this country safe. This is a dangerous place. Make no mistake about it. It’s very cute to go and to blame everybody and say we should stay away from anything that smacks of intelligence gathering. The job of our law enforcement is to make sure that they prevent things, and you only do that to—by being proactive. You have to respect people’s right to privacy. You have to obey the law. And I think the police officers across this country, and at a federal level, state level and city level, do that. But having said all of that, you have to be—you do not want to—you are not going to survive, you will not be able to be a journalist and write what you want to say, if the people who want to take away your freedoms are allowed to succeed.

AMY GOODMAN: That’s New York Mayor Bloomberg. Yale President Richard Levin had condemned the spy efforts, saying, quote, “Police surveillance based on religion, nationality, or peacefully expressed political opinions is antithetical to the values of Yale, the academic community, and the United States.” Who exactly are you representing, Glenn Katon, and your response to what Mayor Bloomberg said?

GLENN KATON: Let me respond first, since he was just on there. I mean, obviously the police have an enormous responsibility to keep us all safe. What we say to that is, you keep people safe by watching their behavior; you don’t keep people safe by watching the religious practices, the color of people’s skin. Those are antithetical to American values.

We are representing a wonderful group of very brave plaintiffs that really represent the full spectrum of Muslims who were spied on. We have African-American imams. We have business owners. We have students at the Rutgers MSA, which was spied on.

GLENN KATON: Yes. And we have a soldier, a U.S. Army Reservist, who was a decorated soldier from Iraq, who has said, basically, “I signed up to support and defend the Constitution, only to come back home and worry about pictures of me being—taking my mother to the mosque, that could jeopardize my security clearance.” So it has a very—this has a very profound stigma in the abstract sense, but in a very practical sense in how people live their lives.

AMY GOODMAN: Glenn Katon, I want to thank you very much for being with us.

This is Democracy Now! When we come back, we’ll be talking to the Israeli and Palestinian filmmaker of a new award-winning documentary called 5 Broken Cameras. Stay with us. 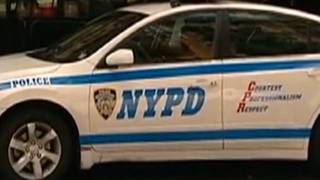