Amy Goodman in Spain on the 75th Anniversary of Guernica Bombing, Portrayed by Picasso Painting

On April 26, 1937, Nazi German aircraft carpet-bombed the Basque town of Guernica in an attempt to support the Spanish dictator, Francisco Franco. The bombing killed as many as 1,600 and wounded hundreds. Eighty percent of the city’s buildings were destroyed. It was one of the first aerial attacks on a civilian target. Pablo Picasso’s painting, “Guernica,” was inspired by the bombing. Amy Goodman is in Guernica today and talks about the impact of the assault 75 years later. [includes rush transcript]

JUAN GONZÁLEZ: We end today’s show with Amy Goodman in the Spanish city of Guernica. She is there 75 years after the historic bombing of the city.

Amy, can you hear me?

AMY GOODMAN: I can. It’s great to be with you, Juan, and with the viewers and listeners of Democracy Now! around the world, because this year is an historic one here in Spain. Seventy-five years ago, on April 26, 1937, the town of Guernica, where I am right now, in the Basque area of Spain, was bombed and ultimately incinerated, 80 percent of the buildings destroyed. It is known now that the German and Italian fascist forces—the German Nazis, the Italians under Mussolini—working with the Franco regime, destroyed this city. There are remembrances all over this country. I’m actually sitting in the center of Gernika Gogoratuz, which is “Guernica Remembered,” speaking with different activists here and survivors.

We walked just a few minutes ago outside. The civilian areas were destroyed. The question is, who put in the orders for the civilian areas to be destroyed but the military areas, like the factory, an armaments factory that made chemical weapons and then went on to make guns—it’s called Astra—it still stands, these factories. What is hopeful, 75 years later, after this symbol of war around the world, is that the armament center is being turned into a cultural center, after young people occupied the building today and said, “This must stand as a symbol of peace, as a symbol of culture.”

Now, the reason people know about Guernica is because of Pablo Picasso. Pablo Picasso, who, after he heard about the bombing of this city in his home country of Spain—he was in Paris—in a 21-day frenzy, he painted the painting that now hangs in the Reina Sofía Museum in Madrid called Guernica, that shows the agony of war etched in the faces of the animals and the people of Guernica. It shows the power of culture, which is also why I am here in Spain, in the Basque area of Spain. Tomorrow night I’ll be speaking in Bilbao at a three-day conference called “Culture Takes Center Stage: The Power of Art and Resistance.” Pablo Picasso said the painting could never come home to Spain until Franco, the fascist leader, was out. And so now the painting sits in Madrid. People in Guernica want it to rest here finally, in the city where—on which it is based.

In the United States, we know, because the tapestry reproductions of Guernica made by Pablo Picasso hung in front of the U.N. Security Council in New York for decades. And I talked about this yesterday. But it was not lost on the higher-ups at the U.N., when the U.S. was about to go to war in Iraq, the irony of this world antiwar symbol being the backdrop of the U.S. leaders making pro-war pronouncements, so they shrouded the Guernica with a blue curtain.

I think it’s our job, as journalists, as citizens of the world, to pull back that curtain and show the realities of war, of poverty, of inequality. It is certainly what is seen all over and why the people of Guernica in the Basque area of Spain care so much about reclaiming their history—and now, instead of being a symbol of war and destruction, of being a symbol of peace, culture and resistance.

JUAN GONZÁLEZ: Amy, in terms of the conference that’s being held, is this a conference of people from all over Spain, or is it Europeans from other parts of the continent there, as well?

AMY GOODMAN: Yes, people from all over the world have gathered this weekend for a conference to talk about peace, culture and resistance. But in lead-up to this, from April 26 until today, on this 75-year anniversary, people throughout Spain have been observing what happened during these fascist times back in 1937.

And I think it’s also very important to point out that there’s a movement here in Spain. Just this week I was in front of the Supreme Court in Madrid. That was the court where Baltasar Garzón, the crusading prosecutor, was tried. Now, he is famous for trying to get Pinochet extradited to Spain for a trial of wars against humanity—crimes against humanity. He succeeded in getting Pinochet arrested in London for a year. He was crusading around Osama bin Laden, getting him indicted; took on issues of war crimes by the United States. But it was only when he said those in power during the Franco years have to be held accountable, we must investigate the mass graves that dot the country of Spain—some say that there are—that Spain is the second only to Cambodia in the numbers of mass, unmarked graves that there are. It was only when Baltasar Garzón said, “We’ve got to take on our own history,” that he was brought to trial himself. He is considered a hero in many parts of Spain, in many parts of the world, as a crusading human rights attorney. But in this country, he can no longer practice.

I think it’s part, Juan, of a campaign around the world of holding those in power accountable—for war crimes, for crimes against humanity—why Guernica takes center stage here in Spain and around the world as a symbol of both destruction but also of survival and of reclaiming history to understand where we are and how we can shape our future.

JUAN GONZÁLEZ: Well, thank you, Amy, for joining us from the Spanish city of Guernica. And we’ll get more reports from Amy when she comes back next week on her visit there. 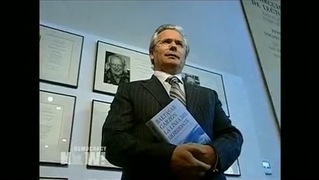