The escalating conflict in Syria has magnified the refugee crisis, both internally and in neighboring countries. More than 4,000 people entered Turkey in recent days, bringing the total number of Syrian refugees there close to 60,000. There are tens of thousands of Syrian refugees in neighboring Lebanon as well. As the crisis deepens, we’re joined by Omar Dahi, assistant professor of economics at Hampshire College. Born and raised in Syria, Dahi has just returned from a research trip to Lebanon looking at the consequences of the Syrian uprising, including the impact on refugees. [includes rush transcript]

AMY GOODMAN: Professor Omar Dahi is also with us. He is speaking to us from western Mass. He’s an economics professor at Hampshire College, born and raised in Syria, just returned from a research trip to Lebanon.

Talk about the Syrian uprising and what you understand is happening now, who is fighting, and what you feel needs to happen, Professor Dahi.

OMAR DAHI: Yeah, well, my research trip to Lebanon focused primarily on the economic and social consequences of the Syrian uprising, with a particular focus on the refugees. I think Sharif described it accurately, in the sense that this was a mass revolt that increasingly became militarized. And my research in the past couple months was on the fallout of what’s happening, overall. We’ve seen, at the economic level, massive devastation. Of course, the main devastation is the loss of human life. Up to 20,000 people lost their lives, perhaps more. This doesn’t include the people who were wounded, who were tortured, who were physically disabled or who have mental health problems, which can add on to that total. About 10 percent of the population has been displaced, about a million-and-a-half people internally displaced inside the country and around 150,000 or more refugees in Syria—sorry, in Lebanon, Turkey and Jordan. So you have this massive upheaval, massive devastation. The estimates—and there were some estimates by the United Nations and other groups before the battles of Damascus and Aleppo, so this is not even taking into account the latest fighting over this past several weeks, is that some 20 percent of the GDP has been lost. You have massive capital flight outside the country, over 10 billion, which is roughly 20 percent of GDP. You have the destruction of land and property and, in particular, destruction of agricultural land, in part by the regime as a deliberate policy in punishing the areas that were under revolt. So you see this massive upheaval.

I also took a look at the refugees situation in Lebanon. In Lebanon, you’ve seen refugees pouring in for more than seven, eight months. Initially, many of them came from border towns that border the Syrian-Lebanese border. Many of those people who left had family members. In a lot of these border towns, there’s a lot of intermarriage, and the distinction between Lebanese and Syrian isn’t as clear-cut. So, many of them who fled from areas around Homs, for example, after February, when there was the massive government attack on Homs, many of them fled and stayed with friends and relatives in Lebanon. However, the numbers are swelling. They’re really increasing. So, the U.N. refugee council has roughly 37,000 registered refugees in Lebanon, but they acknowledge that the number is actually much more. Many people have not registered yet, and there are people moving in all the time. The situation is not ideal, but it’s also not uniform. The people who came initially, as I mentioned, who were housed with family members or who were housed in shelters or abandoned schools, maybe have been relatively better off than the people who are coming now, who are having to pitch tents and being in even more precarious conditions.

AMY GOODMAN: Omar Dahi, let me ask you about the former prime minister, Syrian prime minister’s comments, the highest-ranking official in the Assad regime to defect, the ex-Prime Minister Riyad Hijab, who said in Amman, Jordan, that the Syrian regime is collapsing “morally, financially and militarily.” He said the regime doesn’t control more than 30 percent of the territory, and he said, “I urge the army to follow the example of Egypt’s and Tunisia’s armies—take the side of the people,” he said. The significance of these comments?

OMAR DAHI: Well, obviously, the defection of Riyad Hijab was the highest-level defection in terms of his political ranking, the prime minister, so it was a huge symbolic blow to the regime. It was—psychologically, in terms of the regime’s support, it did signal that as high as the prime minister is actually defecting, which may signal more defections to come at that level. Riyad Hijab himself does not have a mass or a sort of military or any other mass following, so in that sense it’s not a blow in terms of the regime’s strength. I agree with the assessment, though, the fact that the regime has lost control of a lot of the country, that it essentially has been, you know, socially and politically bankrupt; however, that doesn’t mean that it’s not capable of doing a great amount of harm and that the fighting forces may still inflict a lot of harm for months and perhaps years, absent some unexpected event such as an internal coup or some very high-ranking defection within the military-security apparatus.

So the other layers of the regime—and this was put in a recent International Crisis Group report—that the outside layers, the political layers, all the other ways in which a regime normally communicates with its people, has been shed, and what’s left is a very strong fighting militia and fighting force, that still has some support, some social base, who increasingly view their—and this is particularly true for many Alawites, who support the regime—they view that this is a fight for their survival. And they may increasingly stick to the regime because they see it as an all-or-nothing. They fear the fact that if the regime collapses, it might mean massive retaliation against them. And as the dynamics of the revolt continue, you see increasing sectarian tensions, mutual sectarian killings and assassinations, and overall increasing sectarian discourse within Syria that reinforces this feeling. This is not to mention the fact that the coverage, I would say, by both the Syrian regime media as well as the Arab media, such as Al Jazeera Arabic and Al Arabiya, have both—

AMY GOODMAN: We seem to have just lost our guest in the Chicopee studio in western Massachusetts, Omar Dahi, assistant professor of economics at Hampshire College, born and raised in Syria, just returned from a research trip to Lebanon. We will try to get him back, but for now we’re going to go to break. This is Democracy Now! Back in a minute. 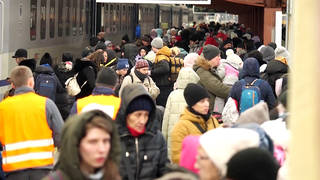