As the Republican National Convention is set to resume today, we turn now to some of the voices of people who marched on the RNC Monday in Tampa, Florida. The event was billed as a demonstration that would bring thousands into the streets, but it ultimately attracted hundreds of people. Conservatives had a field day on social media noting the low turnout. Meanwhile, organizers said that they may not have gotten the numbers they wanted due in part to the threat of a massive storm — but at least they showed up. By comparison, the RNC canceled the first full day of the convention completely due to the weather. Democracy Now! spoke with some of those who braved the driving wind and rain to protest the Republican summit. [includes rush transcript]

AMY GOODMAN: We are “Breaking With Convention: War, Peace and the Presidency,” reporting from Tampa, Florida, inside and out. And it’s outside that we’re going to talk about right now.

In the morning on Monday, hundreds of people marched on the RNC in protest. That was a legal, permitted march. While a number of tweets on the part of Republicans were laughing—you know, the thousands didn’t turn out that they said would turn out—the fact of the matter is that the Republican National Convention was canceled yesterday because of the storm, but the people marched through the storm in the morning.

Well, in the afternoon, there was another demonstration into the so-called Green Zone downtown. This one did not have a permit. It started from Romneyville, the tent encampment set up by the Poor People’s Economic Human Rights Campaign. Some estimated protesters were outnumbered five to one by police in riot gear who lined the streets during the march. One of the day’s popular chants was “This is what $50 million looks like,” a reference to the amount of federal funds spent on security at the Republican National Convention. Here are some of the voices of those who joined the march.

CHERI HONKALA: I’m a mother bear, and this is going to be a nonviolent march. And, you know, this is the march of the poor, and this is our opportunity for us to raise our voice and vent the anger.

CHERI HONKALA: These families don’t have a place to sleep, and that’s why we are united!

AMY GOODMAN: We’re standing at Tampa and Kennedy. It’s downtown Tampa. The RNC was canceled for the day, but people have been protesting throughout the day. People are lined up, arm in arm, and they are coming up to riot police, and they are saying, “Take off your riot gear. We don’t see no riot here.”

REV. BRUCE WRIGHT: My name is Reverend Bruce Wright. I’m with the Poor People’s Economic Human Rights Campaign and Romneyville, one of the organizers of this march and Romneyville. And when we were at the march, at the end of the march, they brought out riot cops, nearly surrounded the remaining people, and deployed the LRAD device. They did not use it. They claimed it was going to be used for communication, that they disabled the LRAD capability.

AMY GOODMAN: What is the LRAD?

REV. BRUCE WRIGHT: The LRAD is a high-intensity sound device that causes nausea, makes you sick, can give you headaches. They deployed it here. They didn’t use it. But it looked like they were prepared to use it.

CHERI HONKALA: Can we hear it for these amazing children that led this march? They are not going to be afraid. Let’s take the White House. Let’s turn it into the Green House. Let’s get rid of corporate America, and let’s fight for human needs. Thank you.

AMY GOODMAN: Well, after bringing out the state police, the riot troopers, the police on horseback, the sound machines, as these peaceful protesters negotiated their way to simply walk down the street, it looks like this storm has passed, at least for now. I’m Amy Goodman, in the streets of Tampa outside the Republican National Convention on the first day. They canceled the convention because of the rain, but the protesters did come out. 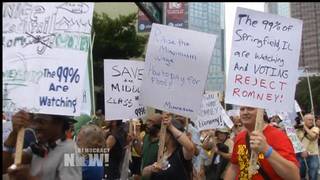