Former Salt Lake City Mayor Rocky Anderson is running for president with the newly formed Justice Party. Although hailing from a solidly red state, Anderson has been known as one of the most progressive mayors of any major U.S. city in recent years. During his two mayoral terms from 2000 to 2008, Anderson was an outspoken champion of LGBT rights, environmental sustainability and the antiwar movement in opposition to the Iraq War. But Anderson says his entry into the race has been hampered by the united Democratic-Republican opposition to third-party candidacies. “Without a doubt, these two parties, Republicans and Democrats, have a stranglehold on our democracy,” Anderson says. “Getting on the ballot is a nightmare.” [includes rush transcript]

AMY GOODMAN: This is Democracy Now!, democracynow.org, “Breaking With Convention: War, Peace an the Presidency.” We’re in Tampa, Florida, covering the convention of the Republicans from the inside and out.

Rocky Anderson, you’re running for president on a third-party ticket, on the Justice line. You talk about two-party tyranny.

ROCKY ANDERSON: Yes. Without a doubt, these two parties, Republicans and Democrats, have a stranglehold on our democracy. They are depriving people around this country not only of being able to get on the ballot, they’re denying all of us of our freedom of choice. And we’re seeing it in the most oppressive ways. In Pennsylvania, four days ago, the Republicans challenged Gary Johnson with the Libertarian Party, they challenged the Constitution Party. And because—

AMY GOODMAN: Gary Johnson—people may not even know who he is.

ROCKY ANDERSON: Well, he’s former governor of New Mexico. He’s got a lot of people behind him across the country.

ROCKY ANDERSON: Running for president of the United States. And the Republicans know that in Pennsylvania they can threaten people financially with ruination. When Ralph Nader was challenged by the Democrats, and they prevailed, they threw out thousands and thousands of signatures. They got an $81,000 personal judgment against Ralph Nader and executed against his bank account. His running mate, Peter Camejo, before he died, wrote out a check for $20,000—

ROCKY ANDERSON: —because they had the—to the Democratic Party for court costs. This is the cost of seeking to get on the ballot, to give people a real choice? Now the Republican Party has just done the same thing to the Constitution Party. Virgil Goode, their candidate, pulled out the other day because he didn’t want to face the prospect of upwards of $100,000 in attorneys’ fees if he lost.

NERMEEN SHAIKH: Rocky Anderson, can you explain how it is that the two-party system became so entrenched?

ROCKY ANDERSON: Well, they’re the incumbents, and so they put in place these laws. We don’t have a uniform federal system at all. Every state is different. There are all these land mines. Getting on the ballot is a nightmare. This illusion that we have democracy, that people can get on the ballot—

AMY GOODMAN: How many ballot—how many states are you on the ballot?

ROCKY ANDERSON: We’ll likely be on between 16 and 18 states. And—

AMY GOODMAN: And what is your main message?

ROCKY ANDERSON: Our main message is to return democracy to this country, get the corrupting money out of government. It’s going to take a people’s movement to do that, because those who are in office, Republicans and Democrats, both in the White House and Congress, have every interest in maintaining the status quo. And every major public policy disaster is pinned to the corrupting influence of money, including caving to the military-industrial complex, caving in to the for-profit insurance and pharmaceutical industries. That’s why we have one of the highest maternal mortality rates in the industrialized world. It’s why we’re the only nation in the industrialized world that doesn’t provide essential healthcare for all of our citizens, and we’re paying more than double what the average is among the developed world, and with far worse medical outcomes. The rate of infant mortality in the industrial world is the worst—next to worst; next to Latvia, we have the worst rate.

AMY GOODMAN: Megan Carpentier, we just have 15 seconds, but do you think Ann Romney succeeded in changing the issue of Todd Akin and his comments, “legitimate rape,” that so raged right before this convention?

Despite Focus on Convention Floor, Major Decisions at RNC Made by Wealthy Donors Behind Closed Doors

NEXTDespite Focus on Convention Floor, Major Decisions at RNC Made by Wealthy Donors Behind Closed Doors 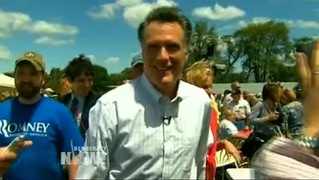