StorySep 24, 2012As Anti-Immigrant “Papers” Law Takes Effect, Jeff Biggers on Arizona, the “State Out of the Union”

AMY GOODMAN: This is Democracy Now!, democracynow.org, “Breaking With Convention,” as we turn now to the issue of immigration. The new Republican platform has adopted Mitt Romney’s call for the so-called self-deportation of 11 [million] undocumented immigrants. Democracy Now! producer Mike Burke briefly spoke with Los Angeles Mayor Antonio Villaraigosa on Monday when he stopped by the Republican National Convention. I meant to say 11 million immigrants. Villaraigosa is the chair of next week’s Democratic National Convention in Charlotte.

MIKE BURKE: Mitt Romney has called for the self-deportation of undocumented immigrants. What message did that send to the Latino community in the United States?

MAYOR ANTONIO VILLARAIGOSA: Well, I think the question—can I reframe it? What does it send to Americans around the country, not just Latinos, and people around the world? No country has ever deported 11 million people. Those 11 million people have five million citizen children. The idea that we would create conditions, make them so deplorable, so miserable that all these people self-deported, is beyond the pale. And it’s one of the reasons why this party has gone so far to the right. They’re losing the mainstream on issues like this.

But it’s not just the self-deportation of 11 million people. They’ve also said that the DREAM Act, that going to fight for your country, that going to college to better yourself and contribute more to the country, in a country that you—the only country that you know, that the DREAMers would somehow be a handout. So, that kind of thinking, it’s not just—I don’t think it’s just offensive to Latinos. I think it’s offensive to most Americans and most people who care about human rights and civil rights and want to reward hard work and people that want to be a part of the great American dream.

MIKE BURKE: Can you talk about Citizens United, as the chair of the DNC, and how it’s affected the 2012 race?

MAYOR ANTONIO VILLARAIGOSA: Well, it’s—Jesus, these super PACs, with super smears, anonymously giving money to a level I don’t think we’ve ever seen in the history of any campaign anywhere, it’s—there’s something wrong with people that wealthy being able to buy an election. And I think—I’m hoping that after this election, no matter what happens, we’re going to take a good, long, hard look at fixing that broken situation.

MIKE BURKE: But you have to play within this. I mean—

MIKE BURKE: Just a few moments ago, we interviewed the mayor of Los Angeles, and he criticized Mitt Romney and his stance on immigration, and specifically about his call for a self-deportation of undocumented immigrants. Your take on that?

MARIO LOPEZ: Well, I think that the—we know that, from the polling data, that immigration is important. And I think that Mitt Romney is showing that he has a tremendous amount of respect for Hispanic voters all across the country. There’s a record number of participation of Hispanic elected officials here at the convention. Never before has either party had one senator, another incoming senator, three governors and a large number of representatives at both the federal and state levels participating in the convention, so I think that that’s really something to look forward to. And in addition, we also know that the most important topic on everyone’s mind is the economy. I mean, it’s—you know, Hispanic unemployment is up 2 to 3 points higher than that for the general population. That’s unacceptable. Hispanics have been particularly hard hit by all the Obama attacks on small businesses, for example. And so, we’re here to make sure that people understand that, that they get a balanced view of things, and that we’re sure that people will vote accordingly in the fall.

MIKE BURKE: But I think many voters wonder what self-deportation looks like. What does that mean, you know, for undocumented immigrants in this country?

MARIO LOPEZ: Sure, well, I mean, you’ll have to ask others on that. But what we want to make sure that folks understand is that Mitt Romney and Paul Ryan have a tremendous amount of respect for the Hispanic community. Paul Ryan has spoken about it a number of times. We want to make sure that people understand that economic policies that have been promoted under President Obama has been—have been especially harmful to Hispanic Americans. And that’s unacceptable, in our view.

MIKE BURKE: One last question: the Huffington Post recently had an exposé about Mitt Romney, and it revealed that some of the earliest funders of Bain Capital were actually Salvadoran families that had direct ties to the death squads in El Salvador. What message does that send to the Latino community?

MARIO LOPEZ: Well, I mean, I didn’t read that piece, so I’m not, you know, up to speed on what the facts are with that case. But, you know, so I’m—you’d have to ask the campaign, I think, on that.

As Anti-Immigrant “Papers” Law Takes Effect, Jeff Biggers on Arizona, the “State Out of the Union” 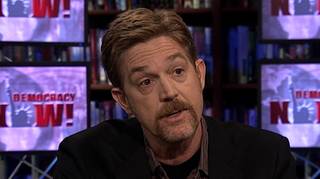 As Anti-Immigrant “Papers” Law Takes Effect, Jeff Biggers on Arizona, the “State Out of the Union”