The Justice Department has announced it will not prosecute anyone involved in the killing and torturing of prisoners in CIA custody after a three-year investigation. The Justice Department had been probing the deaths of two men: one in Iraq and another in Afghanistan. We get reaction from Glenn Greenwald, columnist and blogger for The Guardian. [includes rush transcript]

AMY GOODMAN: Well, we are broadcasting from PBS station WEDU in Tampa, Florida. This is “Breaking With Convention: War, Peace and the Presidency,” as we cover this convention, and we’ll be there in Charlotte next week. And we’re turning right now to Glenn Greenwald, who is a well-known commentator, writer, constitutional lawyer.

And, Glenn, I wanted to start by asking you about Clint Eastwood’s address. It was quite remarkable in his raising the issue of President Obama not closing Guantánamo and also going to the issue of war, somehow saying that President Obama had not ended the war in Afghanistan, which he hadn’t, but Mitt Romney would pull out troops tomorrow, which in fact is not what Mitt Romney has said, quite the opposite. He has criticized President Obama for ending these wars too soon. Glenn Greenwald?

It looks like we may have just lost Glenn Greenwald, as he’s on a video stream. Let me give a little information, as we try to reach Glenn Greenwald, on a second subject we want to take up with Glenn, and that is the latest news that just came down yesterday of Attorney General Eric Holder announcing the Justice Department would not prosecute anyone involved in the killing and torturing of prisoners in CIA custody.

The Justice Department had been investigating the deaths of two men—one in Iraq, one in Afghanistan. Gul Rahman died in 2002 while being held at a secret CIA facility known as the “Salt Pit” in Afghanistan. He had been shackled to a concrete wall in near-freezing temperatures. Manadel al-Jamadi died in 2003 while in CIA custody at Iraq’s notorious Abu Ghraib prison. His corpse was photographed packed in ice and wrapped in plastic.

On Thursday, Holder said, quote, “Based on the fully developed factual record concerning the two deaths, the department has declined prosecution because the admissible evidence would not be sufficient to obtain and sustain a conviction beyond a reasonable doubt.”

The decision has been widely criticized by human rights groups and legal organizations. In a statement, the Center for Constitutional Rights said, quote, “Today’s announcement belies U.S. claims that it can be trusted to hold accountable Americans who have perpetrated torture and other human rights abuses, and underscores the need for independent investigations elsewhere, such as the investigation underway in Spain, to continue. Impunity does not always cross borders.”

While the Justice Department dropped its probe of interrogators involved in the deaths, the government is still prosecuting CIA whistleblower John Kiriakou, who exposed details about waterboarding to the press. And that’s the second issue that I’d like to address with Glenn Greenwald, the columnist and blogger for The Guardian now, author of With Liberty and Justice for Some: How the Law Is Used to Destroy Equality and Protect the Powerful. We’ll get to Clint Eastwood’s address, but let’s first deal with this very significant Justice Department decision, Glenn.

GLENN GREENWALD: Right. Well, it’s been clear for quite some time that the Obama administration, generally, and President Obama, specifically, were very eager to protect Bush officials and CIA officials from any accountability of any kind. And they have sort of done it incrementally. They first, when President Obama got inaugurated, said that anyone who complied with the permission slips given by the Justice Department lawyers that legalized torture, who worked within those, would be completely shielded from wrongdoing, as would the lawyers and the officials who ordered those techniques.

But Holder, at the time—now Attorney General Holder—said there were at least a hundred cases involving deaths of detainees or severe and brutal beatings that he had read the files about and was very disturbed by and could not in good conscience allow to go completely shielded. And so, he said that he would do a—he would ask for a preliminary review to see if criminal charges were warranted in those cases. Last year in June, they said they were closing the books on all of those cases except for two, the two that you just described, that were particularly notorious and brutal, where detainees were killed: in the case of the Iraqi detainee at Abu Ghraib, a military autopsy found that he had been killed, that he died by virtue of homicide and blunt trauma to his head and chest; and in Afghanistan, where somebody basically froze to death after being beaten and chained to a floor without clothes.

And yet, now the Obama administration has announced that even those two cases—clearly murder—will be shielded, as well. So it’s now a complete whitewashing for any and all accountability. And remember, the Obama administration has even aggressively protected them from other forms of accountability, like international investigations in Spain and Germany, where they pressured those governments not to investigate, and civil cases where the victims of the torture regime tried to hold their torturers accountable in court, and the Obama Justice Department succeeded in having those cases dismissed. So it’s a complete whitewash as of yesterday.

AMY GOODMAN: We’re here at the Republican convention, Glenn, and we’ll head to the Democratic convention in Charlotte. So, it’s very much, this week, the news coverage, is the vast difference—and, of course, the candidates want to say that themselves—between the Democrats and the Republicans, why you should choose one over the other. What are your thoughts on this, when you look at this issue, for example, and others?

GLENN GREENWALD: Well, it is true that you can find a handful of issues in which there are genuine differences, and they tend to be in the realm of social issues, things like same-sex marriage, reproductive rights, approaches to jurisprudence, the kind of Supreme Court justices one would appoint. Those are not insignificant issues, and, to the contrary, they’re quite important. But in the scheme of the policies that are actually harming the people of the United States and shaping the kind of country that we have, overwhelmingly those issues are ones that find full-scale, complete agreement between the parties. So if you’d look at the policies that take the most money, that have the most effect on the citizenry, things like the drug war, the primacy of the national security and the surveillance state to operate with total secrecy, the war on whistleblowers, the posture of endless war that we’re in, the supremacy of Wall Street and our nation’s oligarchs in shaping policy through their lobbyists and funding, you see virtually no difference between the parties.

And for that reason, those issues aren’t even being mentioned. They’re not even being discussed as part of this election, because there’s nothing for the candidates to say about the other critically because they essentially have the same position. So, the idea, for example, that what we’re discussing now in terms of closing the books on these torture cases could ever be part of the campaign is inconceivable if the candidates being heard are only Romney and Obama, because they have exactly the same views on these issues. The only hope for all of these critical issues to be addressed is to allow some of these third-party candidates, such as Gary Johnson, the Libertarian candidate, Jill Stein, the Green Party candidate, to be included in the debates, to give them media coverage, so at the very least the Republicans and Democrats are challenged on the positions that they hold in common.

AMY GOODMAN: Finally, let’s go back to Clint Eastwood’s address, when he’s addressing the empty chair of President Obama and talks about Obama not closing Guantánamo, says to—says about Obama that he hasn’t ended the war in Afghanistan and that Mitt Romney would pull out the troops the next morning.

GLENN GREENWALD: Obviously, that speech was so completely bizarre in all sorts of ways, which is one of the reasons why I really loved it. It’s—you know, these conventions are so incredibly suffocatingly scripted and manufactured and contrived, that to have this sort of moment of spontaneity, as bizarre and warped as it was, was kind of refreshing.

But it was—the weirdest part of the speech was not only when he criticized Obama for not pulling the troops out tomorrow, as though Romney would, when Romney has criticized him from the other direction, saying that he’s made a mistake by committing to withdraw—the stranger part was he actually seemed to criticize the commencement of the war in Afghanistan itself, by saying, “Why didn’t we look at what happened to the Soviet Union and their experience in occupying Afghanistan for 10 years?” meaning we should have never commenced that war in the first place. And strangely, the Republicans, all of whom, with the exception of the Ron Paul delegates, obviously believe that war is a good war and that we should stay, somehow cheered. So, it just showed how off script it was that he was inadvertently criticizing the war policies of both the Republican and the Democratic parties, I think without his even realizing that he was doing so, and certainly without the cheering throngs realizing that that had happened.

AMY GOODMAN: I want to thank you very much, Glenn Greenwald, for joining us, author of With Liberty and Justice for Some — that does it for the broadcast — now a writer for The Guardian. 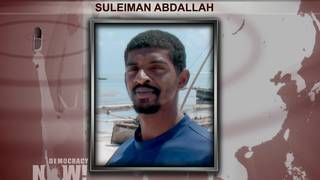