Earlier this week at the Republican National Convention, two attendees were removed for a derogatory incident targeting an African-American camerawoman, Patricia Carroll, with the news network CNN. According to witnesses, the attendees threw nuts at the woman and shouted, “This is how we feed the animals!” Amy Goodman returns to the scene of the incident on the floor of the convention and discusses it with Tom Powers, a delegate from Alabama. Goodman also asks about African-American support for Mitt Romney. [includes rush transcript]

StoryJan 24, 2018Alabama’s Hale County is Subject of Poetic Documentary on Blackness and Everyday Life in the Black Belt

AMY GOODMAN: I want to go to another issue. Earlier this week here at the Republican National Convention in Tampa, two attendees were removed for a incident that targeted an African-American camerawoman. Her name, Patricia Carroll. She’s with CNN. According to witnesses, the delegates threw nuts at her, shouting, “This is how we feed the animals!” She did an interview Journal-isms, which is a website, on Thursday, and she said, “I hate that it happened, but I’m not surprised at all.”

So, last night, I went over to the scene of the incident. I went to the Alabama delegation.

AMY GOODMAN: We’re here in front of the Alabama delegation. The whole convention is chanting “U.S.A.!” as Olympians have just come to the podium. I want to ask them about what happened with the black camerawoman just two days ago from CNN who was standing here, and two of the Alabama delegates threw peanuts at her and said, “This is how we feed the animals.” Let me ask what happened.

AMY GOODMAN: what is your name?

AMY GOODMAN: Are you a delegate here?

AMY GOODMAN: From the state of?

AMY GOODMAN: From the state of?

AMY GOODMAN: I was wondering if you could tell me what happened here a few days ago, with the African-American camerawoman from CNN who was pelted with peanuts.

TOM POWERS: The only thing—only thing I read was in the paper, so I’m not—I wasn’t familiar with what it is. I think it’s something that people were not thinking about what they were doing. I think that, afterwards, they were trying to apologize to that person. Sometimes your actions speak louder than words. And those actions were not appropriate for what they did. I think they were—

AMY GOODMAN: So those two—

TOM POWERS: I think they were—seemed to be apologetic. But sometimes, you know, apologies are not—don’t go very far when you do something to somebody to degrade them or speak lowly to them.

AMY GOODMAN: You know, there’s a lot of discussion about the 1 percent and the 99 percent, and that Mitt Romney represents the 1 percent. But when it comes to African-American support, what’s remarkable, what we perhaps have not seen before, is that the polls show he represents zero percent.

TOM POWERS: I think, you know, any time that—if I had my best friend there, and supporting him and doing that—I think that, you know, you’re looking at somebody that’s outside of what—you know, the norm. And so, for instance, Obama, and I was a black man that was coming in, sure, I would—I would, you know, support him a hundred percent. But I think a lot of blacks today are not—are just a little disappointed in what Obama has done. It’s not that, you know, I’m mad at him or whatever. It’s just the policies that he’s tried to do just haven’t worked.

AMY GOODMAN: And yet, even still, the polls show that Romney has zero percent of the black vote.

TOM POWERS: Well, I wouldn’t say that. We’ve got a lot of black representatives here in our caucus in Alabama. And you think about, you know, 10 to 15, 20 years ago, that’s unheard of. And we’re looking at a—we’re looking at 20 percent here, in Alabama. So if you’re saying zero, and I’m looking at 20 percent here in Alabama, how can you say that it’s zero percent? I think you’re—I think the polls may be where you, you know, live. And you’re looking at people in a black neighborhood that’s very educated, and they’re in the middle class or upper class, they’re looking for a financial gain. And for—you know, like that, they’re looking for that thing. And if you’re looking for somebody—black, white, whatever—that’s in the lower income, and my check’s coming from the government, my income’s coming, and my father, that’s how he got his check, and I’ve got my check now, and the government’s going to give me a check, why should I go out and try to find a job? And I’m depending—I’ve become dependent on that thing.

AMY GOODMAN: But, well, you say 20 percent of the black population would support Romney. Where are African Americans here?

AMY GOODMAN: Well, it’s a large delegation, and I see one African American.

TOM POWERS: We have 50 delegates. You know, we probably have three, four delegates. These are the alternates to our regular delegates.

AMY GOODMAN: Tom Powers, an Alabama delegate, speaking on the floor of the last night of the Republican National Convention. And as we wrap up this segment, I want to find out where you are both headed, Rae Abileah and Medea Benjamin, as the convention wraps up and people head home.

RAE ABILEAH: We will caravanning from Tampa to Charlotte today, Amy, and hitting the streets of Charlotte, which has been dubbed “Wall Street South,” because it’s the headquarters of Bank of America and Wells Fargo. We’ll be joining a coalition march on Sunday morning and having street protests and convention actions all next week.

AMY GOODMAN: But the Democrats have changed the name of the stadium where President Obama will give his acceptance speech on Thursday night, from Bank of America Stadium to Panthers Stadium, interestingly enough. That’s what it had been called, but it was renamed years ago, right? Bank of America paid for the naming rights. Medea Benjamin?

MEDEA BENJAMIN: Well, it shows that they’re embarrassed by this cozy relationship between money and politics. And I just want to say to your viewers and listeners, Amy, that it’s not too late to come out and join us in Charlotte. We needed more people out here in the streets in Tampa, and we need more people in Charlotte.

AMY GOODMAN: And do you expect to have any of the delegates inside, in Charlotte, coming outside to join you, as well?

MEDEA BENJAMIN: Oh, yes, definitely. There’s going to be a lot of inside action among progressive Democrats, joining with people on the outside. But we need all kinds of people who are disgusted by the system to come and join this.

AMY GOODMAN: Interestingly enough, I spoke to Congressmember John Lewis, and we’re doing a special on Labor Day, doing an hour broadcast looking at history and congressman from Atlanta, Georgia, John Lewis’s remarkable civil rights history. I asked him where he’ll be for the Democratic convention, if he’d be protesting outside, and he kind of smiled, and he said, “We’ll see.” Medea Benjamin, Rae Abileah, I want to thank you so much for being with us. This is Democracy Now! When we come back, voting rights. Stay with us. 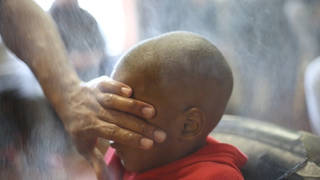