Two weeks before he was assassinated 50 years ago, Martin Luther King Jr. spent the night in Hale County, Alabama, in the heart of the Black Belt of Alabama. He came to Greensboro on March 21, 1968, in an effort to rally support for his Poor People’s Campaign. Supporters of King had to hide him in a small wooden house on the outskirts of Greensboro as members of the Ku Klux Klan tried to hunt him down. It would be the last time King was in Hale County, Alabama. Two weeks later, he was assassinated in Memphis, Tennessee. The safe house where King stayed is now a museum. Now Hale County is the subject of a new documentary: “Hale County This Morning, This Evening.” The film just premiered at the Sundance Film Festival and looks at life in the predominantly African-American county, which is named after a Confederate general. In the film, director RaMell Ross paints an impressionistic portrait of life in the Black Belt in the 21st century. We speak with director RaMell Ross and producer Joslyn Barnes.

AMY GOODMAN: This is Democracy Now! I’m Amy Goodman. We’re broadcasting from Park City, Utah, from the Sundance Film Festival. Two weeks before he was assassinated 50 years ago, Dr. Martin Luther King Jr. spent the night in Hale County, Alabama, in the heart of the Black Belt of Alabama. He came to Greensboro March 21st, 1968, in an effort to rally support for his Poor People’s Campaign. Supporters of King had to hide him in a small wooden house on the outskirts of Greensboro as members of the Ku Klux Klan tried to hunt him down. It would be the last time King was in Hale County, Alabama. Two weeks later, he was assassinated in Memphis, Tennessee. The safe house where King stayed is now a museum.

Well, Hale County is the subject of a new documentary here at Sundance Film Festival. It’s titled Hale County This Morning, This Evening. The documentary looks at life in the predominantly African-American county, which is named after a Confederate general. In the film, director RaMell Ross paints an impressionistic portrait of life in the Black Belt in the 21st century.

RaMell Ross joins us here in Park City, along with the film’s producer, Joslyn Barnes, who’s the co-founder of Louverture Films.

Your film is not about Dr. King 50 years ago. It is about people today who live there. People have described you as “the Walker Evans of today plus.” I mean—and, in fact, you started as a photographer. Talk about this highly unusual film, both in form and content.

RAMELL ROSS: Well, the film comes out of a sort of desire to centralize the African-American gaze. I came to Hale County sort of spontaneously and really began to look back at my life as an African American in the U.S., and sort of understood the South as the conceptual home for the African American, and, sort of through that investigation process, was using photography to sort of illustrate or investigate or explore the way in which my perception was gracing the landscape. And so, I met two wonderful fellows, Daniel Collins and Quincy Bryant, and began filming their lives at some point, and, again, used the camera to really look, to really, really look, for a really long time, and see what unfolds through this process of staring. And, you know, it sort of—the film, in some ways, puts forth a goal of giving attention, visual attention, outside of traditional means to the African-American community.

AMY GOODMAN: Well, explain what you mean and how you made the transition from photography to film.

RAMELL ROSS: So, I was making large-format images, which is four-by-five camera, sort of in the tradition of Walker Evans and William Christenberry, some of those other guys. And it’s a really slow process, where you’re looking in a ground glass, and you have like a little sheet over your head, and you’re like really staring and trying to work the focus out. And in looking that way, for such a long time and with such detail, in some ways, what happens in front of you begins to sort of disintegrate, in nontraditional means. And I like to use the example of when you look at a word and the letters sort of, you know, disassociate. And you have—you’re like, “What am I looking at?” People don’t do that when they look at people. They don’t allow the social construction of, you know, the culture or their race or whatever to sort of break apart, and specifically not to the African-American community. And so, the camera, as it’s time-based, allows you to spend the time looking in that way. And it’s amazing what unfolds or what sort of emerges from that process.

AMY GOODMAN: I mean, as you talk about Walker Evans, looking at a review—and the reviews have been rave for Hale County_. From the Hollywood Reporter, they write that “photographer Walker Evans and writer James Agee composed Let Us Now Praise Famous Men, their famed text-and-image study of Great Depression-afflicted sharecroppers” in Hale County. But there’s “not a single close-up of an African-American face in any of Evans’ photos.” You turn that on its head. You give us a very different picture.

Joslyn Barnes, you produced this film. Why was RaMell’s work so unusual for you, that you wanted to be a part of this project?

JOSLYN BARNES: I just want to clarify: I produced a film with RaMell and also with Su Kim, another producer.

I think—you know, I think of documentary as an encounter. And one of the most unusual elements of this film is not only the centrality of the African-American perspective, but a completely new imaging of African Americans. It really takes apart the historical—it brings the historical to bear on it, but it also takes it apart. And part of this, the strategy was really in the editing process. It’s the looking and the durational aspect of the looking that RaMell brought to this. It opened up a space of reflection, I think, for the viewer to enter and, you know, either make sense of their own experience or actually come into something new. But the editing pattern is associative, so he opened up interstitial space. And that is like—it works in a kind of neurological way, where you can follow the grammar of the film, but it also undermines the way that you have been conditioned to look. And it’s poetic, and it’s metaphorical. And that lets you drop your—some of your conditioned responses and see differently.

AMY GOODMAN: Some people may have focused on Alabama, outside Alabama, for the first time with the special election of sexual predator Roy Moore, who just barely lost to the Democrat. But you give us a picture of everyday life in Alabama. Talk about storytelling in a time of Trump, RaMell. We just have less than a minute.

RAMELL ROSS: Well, I think, you know, it’s not only the stories we tell. It’s how we tell the stories. And it’s also what is the material of the story, what is the arc of the story. And I think in—I guess, in this time of Trump, a thing that I personally focused on is not focusing so much on those beginning to end, but all of those middles that are traditionally sort of neutered in order to get to that end. It’s almost like corporate language, in which every word has some goal or some instructional goal. But in that, specifically in relationship to blackness, you reduce it to its end goal, and therefore sort of don’t allow the beauty of being, the beauty of the human, in the story, to be something larger than its arc or be something larger than the trajectory of whatever you’re trying to explain or whatever you’re trying to convey.

AMY GOODMAN: Well, this, I hope, is just the beginning of our conversations. I want to thank you so much. Congratulations on your film, RaMell Ross, director, cinematographer, editor, Hale County This Morning, This Evening, and Joslyn Barnes. 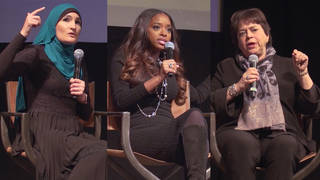