Following the attacks on September 11, 2001, Sikh Americans have faced many of the same discriminatory conditions as Muslims and Arab Americans. Because of their distinct appearance, they are visible targets of violence and harassment. Observant Sikhs do not cut their hair; male followers often wear turbans and do not shave their beards. In April, the number of threats against Sikh Americans led Democratic Rep. Joseph Crowley of New York to send a letter to Attorney General Eric Holder urging the FBI to collect data on hate crimes committed against the community. We’re joined by Jaisal Noor, a correspondent for Democracy Now! and for Free Speech Radio News, and we rebroadcast his 2011 report on post-9/11 hate crimes targeting Sikhs. [includes rush transcript]

AMY GOODMAN: I wanted to continue our coverage of the massacre at the Sikh temple in suburban Milwaukee, Wisconsin, in Oak Creek, in which a gunman—we now know his name. His name is Wade Michael Page. He was in the military. CBS is reporting he was in psychological operations at Fort Bliss and then also at Fort Bragg in North Carolina. Since then, he has—the details of his discharge were not clear. He joined the military in 1992, honorable discharge in 1998. We want to turn now to Democracy Now!’s Jaisal Noor.

Jaisal, your family is Sikh. And, in fact, in just the last few years you did a report on the Sikh community in the United States since 9/11.

JAISAL NOOR: Absolutely, Amy. And I think it’s important to be clear, that these incidents that have been talked about against Sikhs, they did happen frequently before 9/11, but since 9/11 they definitely have picked up. And it’s important to understand that the Sikh community is—right now, the people, friends and family I’ve talked to all over the country are deeply scared. You know, my thoughts go out to the community in Wisconsin, but it could have been a community in Baltimore, it could have been a community in California.

AMY GOODMAN: Where are the large populations centers of Sikhs in the United States?

JAISAL NOOR: In California, in places like New York. The largest amounts of acts of hate crimes against Sikhs happen in New York and California, as long as Washington, D.C., and Baltimore.

AMY GOODMAN: When I was out in Madison, Wisconsin, I met your cousin, who was a medical student at the University of Wisconsin, Madison.

JAISAL NOOR: Yeah, so there’s a—there is a significant community in Wisconsin, as well. And I think the thoughts and prayers go out to the Sikh community, also to the Muslim community. We frequently hear that Sikhs are confused for Muslims, and the natural continuation of that thought is that it’s somehow permissible, it’s somehow accepted, to be targeting Muslims, as well. And I know the Muslim community is—organizations like CAIR have come out in support of Sikhs and are standing together with the Sikh community.

AMY GOODMAN: I want to turn to the piece you did. Now, this is before this massacre that took place at the Oak Creek temple outside of Milwaukee. Jaisal did this piece for us and Free Speech Radio News last year about Sikhs in the United States after 9/11.

JAISAL NOOR: On September 11th, 2001, members of the Sikh-American community mourned the day’s tragic events. But they soon became concerned for their own safety. Sikhs wear turbans and have uncut beards, an appearance that some associate with terrorists. On that day, Sonny Singh was a 21-year-old college student at the University of Massachusetts at Amherst.

JAISAL NOOR: Singh says that while growing up in North Carolina, community members singled him out because of his appearance, but such incidents increased dramatically after the terrorist attacks.

JAISAL NOOR: Across the country, Sikhs, along with others identified as Muslim, Arab or South Asian, were targeted. Amardeep Singh, who co-founded the Sikh Coalition, a civil rights and advocacy group, said the attacks were immediate.

AMARDEEP SINGH: Once we received reports that members of the community in New York City were being physically attacked—in the cases of two members of the community, chased in the streets near the World Trade Center site the morning of 9/11—we issued a press release the night of 9/11 saying the Sikh organizations of New York call on police to protect our community from hate crimes and grieve with the rest of the country.

JAISAL NOOR: Just four days later in Arizona, Balbir Singh Sodhi, a Sikh immigrant from India, was shot and killed on his front lawn in what authorities said was a hate crime. Amardeep Singh criticizes law enforcement for not keeping hate crime statistics for the Sikh community.

AMARDEEP SINGH: The federal government refuses, ’til this day, to specifically track hate crimes against Sikhs. So, for example, there were two Sikh gentlemen in Elk Grove, California, who were shot and killed in what prosecutors believe was a hate crime, and those two men do not even have the dignity of being a statistic. And if you’re not tracking a problem, how can you help solve it, if you don’t understand it?

JAISAL NOOR: Although physical attacks have since subsided, some Sikhs continue to face intimidation. According to surveys conducted by Sikh civil rights groups, 75 percent of Sikh youth in San Francisco experienced bullying. In New York, where one in two were bullied, 18-year-old Gurwinder Singh says he was often targeted at school.

GURWINDER SINGH: You would expect to be called a terrorist. They would affiliate you with bin Laden. It made my education miserable, and I wouldn’t focus on my education at all. I would just focus on like, you know, being safe and getting safe out of school and just get home.

JAISAL NOOR: In one incident, Singh said he was chased down and beaten by a classmate.

GURWINDER SINGH: He basically ended up hitting my head into a pole. It was a metal pole. And I fell down on the ground at that moment, because it really hurt. And I got a bump on my head at that time, I remember.

AMARDEEP SINGH: It’s been 10 years, and we are 110 percent convinced that the mainstream media has done a woeful job of covering the stories of our community post-9/11.

JAISAL NOOR: The Sikh Coalition has partnered with other civil rights groups to launch the website “Unheard Voices of 9/11.” Using video and photos, it features the personal stories of people attacked, harassed and discriminated against. Organizers say it’s a way to have their stories also remembered on September 11th.

Reporting for Democracy Now!, this is Jaisal Noor.

AMY GOODMAN: This is Democracy Now!, democracynow.org, The War and Peace Report, Democracy Now!’s Jaisal Noor here with us in studio. Jaisal, you aired this for the anniversary of the September 11th attacks last year.

JAISAL NOOR: Amy, I felt that the attacks on Sikhs were one of the greatest untold stories, and the media had not done its job in reporting these incidents and also putting them in context. Just three days before this piece aired on Democracy Now!, there was an incident, a hate crime incident in North Carolina, which got virtually no media coverage around—that was just two days before the anniversary of September 11th.

JAISAL NOOR: On a store owned by Sikhs in North Carolina, the words “terrorists go home, 9/11 go home” were sprayed on that—were sprayed on that house, and we’ve seen that—on that business, and we’ve seen that happen time and time again. I think, for a lot of Sikhs, this was unexpected and extremely tragic, but the warning signs were there. And many members of the—many, if not every member, of the Sikh community in this country does live in fear of this kind of thing happening.

AMY GOODMAN: Wade Michael Page is the name that has just come out of the shooter, CNN reporting he may have been a white supremacist, may have been wearing a 9/11 tattoo, was less-than-honorably discharged from the military in 1998, CBS is reporting.

JAISAL NOOR: I think the fact that he’s a veteran is significant. My first thought when I heard this happen, my thought was it might have been a veteran. I have a family member who works closely in VA hospitals, and he has been singled out himself, threatened with—threatened with death by—

AMY GOODMAN: He wears a turban.

JAISAL NOOR: He wears a turban, has a beard. And as part of a series I did for Free Speech Radio News on the 10th anniversary of September 11th, I did another story about Muslims after 9/11, and then I did a story about veterans after 9/11. I felt that—I know he, this man who was accused of this crime, was not a recent veteran. He was—served two decades ago. But we have this—we have more than two million veterans who have served in the last 10 years in Afghanistan and Iraq, and they’re coming home and they’re not getting the support they need from our society. And they have been exposed to a tremendous amount of violence. And we can’t disconnect our foreign policy abroad, the tremendous violence we have wreaked upon the world, and think that that’s not going to come back. And when these soldiers come back, they do bring those experiences back with them.

JAISAL NOOR: I think by calling it a senseless act, you are doing a disservice to the victims, because this event happened on the morning of the Sikh day of worship, on Sunday. This was clearly planned. The attacker knew the time when the Sikh community would be gathering. This was a planned and targeted attack. We should be very clear about that. And also, by calling it a senseless act, we’re not acknowledging the deep problem we have in this country of white supremacism, of racial violence against all people of color, and we’re letting ourselves off the hook by not acknowledging that. And that’s a dialogue, that’s a discussion that we need to have in this country, that this goes on all the time, and no matter if you’re Sikh, you’re Muslim, you’re African American or Latino, this is a constant problem not only in suburban or rural areas but in cities, as well.

AMY GOODMAN: Well, Jaisal Noor, I want to thank you for being with us, and we will post that report at democracynow.org.

This is Democracy Now! When we come back, we’re going to talk about gun control, in Wisconsin and around the country. John Nichols will stay with us in Wisconsin, and we’ll be joined by Colin Goddard, who was a victim of the Virginia Tech shootings, the massacre that killed 32. He was shot four times. Stay with us. 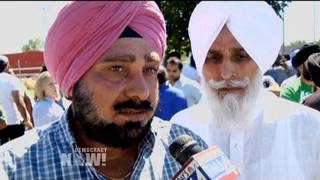