Six Sikh worshipers were killed in Wisconsin on Sunday after a gunman, possibly a white supremacist, opened fire in the deadliest attack on Sikhs in recent memory. The gunman entered a Sikh temple in Oak Creek, Wisconsin, and killed at least six people and critically wounded three others before a police officer shot him dead. The suspect has reportedly been identified as Wade Michael Page, a 40-year-old Army veteran. Police say they are treating the shooting as an act of domestic terrorism. We’re joined by Gurcharan Grewal, president of the Sikh Religious Society of Wisconsin. [includes rush transcript]

StoryAug 06, 2012Sikh Temple Shooting Stokes Fears in Community with Deep Roots in Wisconsin and Across U.S.

AMY GOODMAN: Just two weeks after the Aurora, Colorado, movie theater massacre, another killing spree has stunned the nation. On Sunday morning, a gunman entered a Sikh temple in Oak Creek, Wisconsin, and killed at least six people, critically wounding three others, before a police officer shot him dead. A police officer is also critically wounded. CNN is reporting the shooter is a 40-year-old white man named Wade Michael Page. On Sunday, police said they’re treating the shooting as an act of domestic terrorism. The gunman attacked the temple as women were preparing a community meal known as a Langar, a free shared meal that is part of the Sikh tradition emphasizing equality and common roots. The secretary of the Oak Creek Sikh temple voiced dismay over the shooting.

OAK CREEK SIKH TEMPLE SECRETARY: It’s very sad, things that happened. And it’s unexpected, you know. We never, ever thought—we never think these things are going to happen to our temple, because the people are—go over there for pray, and to pray for everybody. But, unfortunately, this happened. It’s really sad.

AMY GOODMAN: After Sunday’s shooting, the police initially did not release any details about the gunman or a possible motive for the shooting. ABC News, citing anonymous sources, said it was told the shootings were the work of a white supremacist or skinhead. Reuters is reporting the gunman had a tattoo marking the September 11th attacks. John Edwards is the police chief in Oak Creek.

JOHN EDWARDS: We’re treating this as a domestic terrorist-type incident, and therefore the FBI has the resources needed to help investigate that. The ATF is also involved with this, along with the Milwaukee Police Department, is assisting us with the DA’s office in the officer-involved shooting portion of this investigation.

AMY GOODMAN: Both President Obama and his Republican challenger, Mitt Romney, expressed their condolences for the victims of the shooting. Obama said, quote, “As we mourn this loss, which took place at a house of worship, we are reminded how much our country has been enriched by Sikhs, who are a part of our broader American family.” Romney said, quote, “This was a senseless act of violence and a tragedy that should never befall any house of worship.”

Many members of the Sikh community say the massacre has shaken their sense of security. Sikhism is the fifth largest religion in the world with over 25 million followers, of which roughly 500,000 live in the United States. Following the September 11, 2001, attacks, Sikh Americans face many of the same discriminatory conditions as Muslims and Arabs Americans. Because of their distinct appearance, they were visible targets of violence and harassment. Observant Sikhs do not cut their hair. Male followers often wear turbans and don’t shave their beards.

In April, the number of threats against Sikh Americans led Democratic Congressmember Joseph Crowley of New York to send a letter to Attorney General Eric Holder urging the FBI collect data on hate crimes committed against the Sikh community. According Crowley’s letter, two Sikh men in California were slain, a Sikh temple in Michigan vandalized, and a Sikh man was beaten in New York, all in the previous year.

For more, we start in Wisconsin. We go to Gurcharan Grewal, president of the Sikh Religious Society of Wisconsin. He heads a Sikh temple in Brookfield, Wisconsin, 15 miles from the site of Sunday’s shooting. He was in Oak Creek until last night.

Welcome to Democracy Now!, Gurcharan Grewal, and our profound condolences on the killings and the woundings in your community.

AMY GOODMAN: Can you talk about what you understand happened, as you spent yesterday in Oak Creek?

GURCHARAN GREWAL: Yes. First of all, we are all shocked and saddened by this terrific crime. And our sympathy and prayers go out to all those—all the families, all the victims and all the police enforcement who came to our rescue. And we are hoping that the wounded ones, hopefully they will survive. We are praying for them, including the police officer, like I said before. Everybody is just in a shocked stage, but we are getting over it a little better and hoping for the best.

AMY GOODMAN: Describe the events, as people told you, if you could reconstruct what happened. Just hearing the name of the shooter, it’s just come out as we went to broadcast, and CBS is saying, according to sources in the U.S. Army, Page enlisted in April 1992, given a less-than-honorable discharge in October ’98. He served at Fort Bliss, Texas, in the psychological operations unit. In 1994, was last stationed at Fort Bragg, North Carolina, attached to the psychological operations unit. The details of his discharge were not immediately clear.

GURCHARAN GREWAL: Yes. I think, ultimately, that the problem comes with gun control. I don’t know when we are going to get serious about all this, and I don’t know how many more lives it’s going to take before something will be done. No matter who the person is, I think if he doesn’t have access to the guns, and hopefully the violence won’t be as much as we are seeing today, we’ve seen in the recent month and months before, and it happens time and time again. I think somebody’s got to get serious and do something about it.

AMY GOODMAN: Gurcharan Grewal, yesterday, the prayer—the morning prayers were beginning at 11:30. This took place at 10:30 as people were coming to the temple?

GURCHARAN GREWAL: Yes. Actually, the morning session starts early in the morning. People go there like around 8:00. They’ve got to prepare the meals, and they’ve got to prepare for the services. And the main crowd comes around 11:30, Then it goes on ’til 1:30, 2:00. And, anyway, we are lucky that it was not that crowded at the time. And it could have been a lot worse.

AMY GOODMAN: And what happened? He came up. How did people describe him?

GURCHARAN GREWAL: Yeah, many people are describing that he pulled into the parking lot, then he started shooting in the parking lot. I think he shot two people in the parking lot. Then he went inside the temple. He went in the praying room. He shot our priest in there. Then he went into the kitchen. He could not find anybody in there, because people locked themselves in the closet and the pantries and all that. Then he went into the room where priests stay, and one of the priests was there, and the president of the temple was in that room. He shot both of them in there. Luckily, that priest got minor injuries, but the president was shot fatally, and unfortunately he did not make it. And we could not find all the information 'til almost like 11:00 last night. It took a lot longer before we could even find anything about that. And even now, we don't know the names of all the victims, other than the president of the temple.

AMY GOODMAN: Could you tell us about the president of the temple, the head priest.

GURCHARAN GREWAL: The head priest, he survived. Like I said, he had minor injuries. But the president did expire, and he was a real, real nice guy and well known in the community, a real hard-working, honest person. And our thoughts are with the family.

AMY GOODMAN: At your temple, not far from there, Gurcharan Grewal, the former Wisconsin Governor Tommy Thompson was speaking yesterday?

GURCHARAN GREWAL: Yes, Tommy Thompson was there. He was supposed to speak there, and he did not speak, but he stayed at our temple for half an hour or so. And he had to cancel his speech. Then he had another appointment after that. He had to go there. We have the law enforcement at our temple. We called them immediately. And they stayed there all day. They stayed there all night. They’re still there today. And we are taking all the precautions we can at our site.

AMY GOODMAN: He didn’t speak because of what took place at Oak Creek?

AMY GOODMAN: Yes, exactly. Everybody was so shocked, and he did not want to politicize this. And then he had another engagement he had to go to. So, he did stay at the temple for half an hour, 35 minutes.

AMY GOODMAN: Now, the police officer who shot the gunman, killed him.

AMY GOODMAN: He also was critically wounded, or his partner?

GURCHARAN GREWAL: Actually, the shooter, he shot one of the police officers. He is seriously, seriously injured. Then the second police officer shot the attacker. So he killed the attacker. But the one police officer who is injured, he is in serious condition, as far as we know, and we are praying for him, too. And if those two people, the brave people, were not there, the situation could have been a lot, lot worse.

AMY GOODMAN: —can you explain how they work? How strong, how strict are they?

GURCHARAN GREWAL: Well, I think it’s all over the country, not just Wisconsin. Somebody’s got to get serious about this, like I said before. I don’t know how many lives it’s going to take before something will be done. I don’t know when we are going to start waking up and thinking about it. I mean, there could be people with some problem, but if they don’t have the easy access to these semi-automatic, automatic rifles and all those, then I think we can save some lives and do something good to the community.

NEXTSikh Temple Shooting Stokes Fears in Community with Deep Roots in Wisconsin and Across U.S. 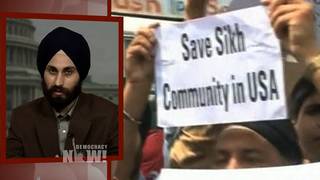