One year ago today, the state of Georgia executed Troy Anthony Davis for a crime many believe he did not commit. He was put to death on Sept. 21, 2011, despite major doubts about evidence used to convict him of killing police officer Mark MacPhail, including the recantation of seven of the nine non-police witnesses. As the world watched to see whether Davis’s final appeal for a stay of execution would be granted by the U.S. Supreme Court, Democracy Now! was the only news outlet to continuously broadcast live from the prison grounds in Jackson, Georgia. During our six-hour special report, we spoke with Davis’ supporters and family members who held an all-day vigil, then heard from those who witnessed his death by lethal injection at 11:08 p.m. [includes rush transcript]

StorySep 26, 2011Martina Correia on Execution of Troy Davis: “My Brother’s Fight Will Continue”

AMY GOODMAN: We’re on the road in Madison, Wisconsin, part of our 100-city tour, and you can go to our website at tour.democracynow.org to see the journey.

One year ago today, the state of Georgia executed Troy Anthony Davis for a crime many believe he did not commit. He was put to death despite major doubts about evidence used to link him to the killing of police officer Mark MacPhail, including the recantation of seven of the nine non-police witnesses at his trial.

As the world watched to see whether Davis’s final appeal for a stay of execution would be granted by the U.S. Supreme Court, Democracy Now! was the only news outlet to continuously broadcast live from the prison grounds in Jackson, Georgia. During our six-hour special report, we spoke with Davis’s supporters and family members who held an all-day vigil, then heard from those who witnessed his death by lethal injection at 11:08 Eastern time.

Soon we’ll be joined by some of the people who were with us that night, as we look back on the legacy of this case and what it means for the death penalty in this country. Even as Texas executed Robert Wayne Harris last night, its eighth prisoner of the year, Californians are set to vote this November on abolishing capital punishment. But first, I want to turn to someone who cannot be with us today, and that’s Troy Davis’s older sister Martina Correia, who died in December at the age of 44, after a more than decade-long battle with breast cancer. This is Martina Correia speaking a year ago today, hours before her brother Troy was executed.

MARTINA CORREIA: So I want to stand with my family and say that my—our lives, and my son’s and my sisters’ and brothers’ lives and my niece’s life, has been richer for knowing Troy. Anybody who’s met Troy has come away with an imprint of him on their soul. I don’t have to tell people what my brother’s life, because once they get to meet him, they can see for themselves. And that’s why they’ve tried to keep him voiceless in the press, because they don’t want you to know who Troy Davis is, because then you couldn’t stand by and allow the state to kill in your name. So I just would like to say that I am Troy Davis.

MARTINA CORREIA: And I just—and I just would like to say that, you know, I’ve been battling cancer for 10 years. And I’m—I don’t have cancer, but I’m reaping some of the effects of the medicine. Several months ago, I couldn’t—I was doing fine. And after that, I couldn’t get up out of the chair. But I’m here to tell you that I’m going to stand here for my brother today.

Now let’s get to work, and let’s tell Georgia that we will not stand by, and we will defy them. And we need to start with that gold dome. Thank you.

AMY GOODMAN: That was Martina Correia standing up in her wheelchair, the older sister of Troy Davis, his most vocal and steadfast advocate, speaking a year ago. As the scheduled time of Troy Anthony Davis’s execution approached, hundreds of his supporters rallied outside the prison in Jackson. Around 7:00 p.m., the crowd erupted into thunderous cheers. For a moment, it appeared the Supreme Court had stayed the execution.

AMY GOODMAN: What did Troy tell you the last time you saw him?

BENJAMIN JEALOUS: The last time he—part of the reasons—

AMY GOODMAN: We are hearing some kind of cheer that has gone up.

BENJAMIN JEALOUS: Got a stay!

AMY GOODMAN: But the jubilation was short-lived. After realizing the execution had just been delayed, not stayed, supporters of Troy Davis waited for news from the Supreme Court. At about [10:45], the crowd went silent, when it was learned the high court would not stop the execution. Prison officials began the lethal injection process minutes later, at 10:53. Troy Davis was pronounced dead at 11:08 p.m.

KRISTEN STANCIL: The court-ordered execution of Troy Anthony Davis has been carried out. The time of death is 11:08 p.m.

AMY GOODMAN: Again, prison official sharing the news that Troy Anthony Davis was executed at 11:08. That was the time of death. I’m standing with…

AMY GOODMAN: Minutes after the state of Georgia executed Troy Davis, a group of reporters who witnessed the execution walked out of the death chamber and onto the prison grounds. They described Troy Davis’s final moments. Jon Lewis is a radio journalist at WSB.

JON LEWIS: Basically, it went very quietly. The MacPhail family and friends sat in the first row. Warden read the order, asked if Troy Davis had anything to say. And Davis lifted his head up, looked at that first row, and made a statement, in which he said—he wanted to talk to the MacPhail family and said that, despite the situation you’re in, he was not the one who did it. He said that he was not personally responsible for what happened that night, that he did not have a gun. He said to the family that he was sorry for their loss, but also said that he did not take their son, father, brother. He said to them to dig deeper into this case, to find out the truth. He asked his family and—his family and friends to keep praying, to keep working and keep the faith. And then he said to the prison staff, the ones he said “who are going to take my life,” he said to them, “May God have mercy on your souls.” And his last words were to them: “May God bless your souls.” Then he put his head back down, the procedure began, and about 15 minutes later it was over.

AMY GOODMAN: Some of the voices from Democracy Now!’s innocentman”>special broadcast from a year ago today, September 21st, 2011, when Troy Anthony Davis was executed by the state of Georgia. When we come back from break, we’ll be joined by the head of the NAACP, who was there that night, Ben Jealous. And we’ll be joined by Kim Davis, Troy Anthony Davis’s sister. She, too, was there. And Laura Moye of Amnesty International. All three were standing on the grounds of the prison when Troy Davis was put to death. Stay with us. 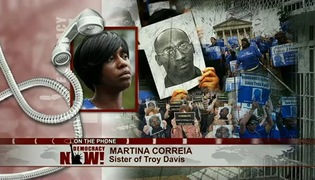 Martina Correia on Execution of Troy Davis: “My Brother’s Fight Will Continue”