On Sunday, ahead of the Democratic National Convention in Charlotte, more than 1,000 people gathered for a March on Wall Street South. Before the march kicked off, speakers from organizations around the country gathered in Charlotte’s Frazier Park. We hear some of their voices. [includes rush transcript]

AMY GOODMAN: Hazel Dickens singing “They’ll Never Keep Us Down,” which was featured in the documentary Harlan County, USA about the 1973 strike against Duke Energy, and we’ll talk about that in a moment. This is Democracy Now!, democracynow.org, “Breaking With Convention: War, Peace and the Presidency.” We’re covering the Democratic National Convention, inside and out. I’m Amy Goodman.

The Democratic convention is here in Charlotte. More than 1,500 people gathered for a March on Wall Street South on Sunday. Before the march kicked off, speakers from groups around the country gathered in Charlotte’s Frazier Park. Here are some of the voices from that rally.

JOSE RICO: My name is Jose Rico. I’m part of the North Carolina DREAM Team and the Immigrant Youth Forum, here from North Carolina, in Charlotte and in the state. Welcome. We are putting the voice of those most directly affected on the forefront. I am undocumented and unafraid and unashamed and unapologetic. And we are here to tell the administration that we are, that we exist, that we’re going to keep him accountable and that those announcements are not enough. We need to—we need more. There are people—there are people still in detention centers. There are people who are DREAM-eligible that are still in jails, and we need more from the Obama administration. OK, we’re here, and we need more. Undocumented and unafraid!

FERNANDO LOPEZ: My name is Fernando Lopez. I’m coming from Phoenix on the No Papers, No Fear–Journey for Justice. We come here because we’re tired of the views in the community. We’re tired of being incarcerated every single day. We’re used as the cheapest labor as migrants. Why? Because the United States has been taking care of its business, which is exploit the rest of the planet. By doing this, we’re being forced to migrate, to leave our homes looking for a better opportunity. But what we’re finding in this place today: discrimination, racism, incarceration and the separation of our families. Our target was the Democratic convention to bring attention to this, but also we were traveling through the South communities. Why? Because we want to organize, because I’ve realized that the real power is within the people in the community, and we have to realize that right now.

MC: Our next speaker, John Heuer, is a Vietnam veteran merchant seaman, now serving as president of the Eisenhower chapter of Veterans for Peace and director of NC Peace Action.

JOHN HEUER: Welcome to Charlotte, North Carolina. We are home here in North Carolina of Fort Bragg, the launch pad for many of our foreign military expeditions, where so many servicemembers are sent to fight in foreign lands, and so many soldiers come home wounded and broken. The tragedy of active-duty and veteran suicides is a great shame on our nation. And we seem to be changing, changing the invasion and torture strategies of Bush-Cheney era with assassinations by drones. Our drones have killed so many in so many lands that we have become the terrorists of the world. When children in Pakistan hear the sound of an airplane overhead or see the shadow of a drone circling above them, they see the shadow of death. What cruel and unusual punishment for a people whose only crimes are wanting some food on their table, clean water to drink, clothes on their back and a place to sleep in peace. Mr. Obama, we call on you to end these wars, end the threats and aggression against Iran, declare a ceasefire, free Bradley Manning, bring our troops home and our war dollars home, and ground the drones. Cease fire, ground the drones!

JARIBU HILL: I’m Jaribu Hill from the belly of the beast in the state of Mississippi. And we are proud to be here with you today to stand in solidarity. Tomorrow, September 3rd, 1991, was when the Hamlet, North Carolina, Imperial Foods workers were burned alive as they tried to work for a living. We have to remember the Hamlet workers, the Imperial Foods workers. We have to remember their struggle and the struggles of all working people. We are in solidarity with this march, because we understand that Wall Street ain’t just on Trinity Street, Wall Street ain’t just on Chambers Street in New York, Wall Street is wherever there’s corporate greed. And why not have a Wall Street South march, when this is where chattel slavery was born? Why not have it in the place where there’s never been justice? Why not come to North Carolina, that has the lowest density of union members in this country? Why not come, because nobody is organizing the South?

SINGERS: Workers from the South are here to say, the time is ripe, let’s organize today. We’re tired of being used and exploited. Get up, stand up, wake up. We’ll be doing it. Oh, we’re going to organize, organize, organize. Come on!

REV. C.D. WITHERSPOON: We’ve got to stand up against corporate greed. We’ve got to say to Bank of America and every other corporation that is participating in crimes against humanity that enough is enough. And like Sister Fannie Lou Hamer, we’re sick and tired of being sick and tired. But not only are we sick and tired of being sick and tired, we’ve got our mind made up, and we won’t turn back, and we’re prepared to fight the good fight of the faith until justice falls down like waters and righteousness like a mighty stream. And in the words of our beloved Frederick Douglass, if there is no struggle, there shall be no progress. All power to the people!

AMY GOODMAN: Oh, some of the voices: Reverend C.D. Witherspoon, the last, Southern Christian Leadership Conference; and before that, Jaribu Hill with Mississippi Workers’ Center; John Heuer of Veterans for Peace; Fernando Lopez on the UndocuBus, and we’re going to talk about the UndocuBus in the next segment; and Jose Rico of the North Carolina DREAM Team—some of the voices of the some 1,500 people out in the streets this past Sunday. 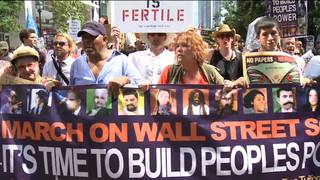