Among the speakers on the closing night of the Democratic National Convention in Charlotte on Thursday was the legendary civil rights activist and Georgia Rep. John Lewis. During the 1960s, Lewis was arrested more than 40 times and beaten almost to death as he served as chair of the Student Nonviolent Coordinating Committee, marched side by side with Dr. Martin Luther King Jr., helped organize the Freedom Rides, campaigned for Robert Kennedy’s presidential bid and spoke at the 1963 March on Washington. [includes rush transcript]

AMY GOODMAN: This is “Breaking With Convention: War, Peace and the Presidency,” Democracy Now!'s last day of two-hour coverage daily from the Democratic National Convention, inside and out. I'm Amy Goodman.

Among the speakers on the closing night of the convention here in Charlotte Thursday was the legendary civil rights activist, now 13-term Georgia congressmember, John Lewis.

REP. JOHN LEWIS: I first came to this city in 1961, the year Barack Obama was born. I was one of the 13 original Freedom Riders. We were on a bus ride from Washington to New Orleans, trying to test a recent Supreme Court ruling that banned racial discrimination on buses crossing state lines. We tested the waiting rooms, restroom facility. But here in Charlotte, North Carolina, a young African American tried to get a shoeshine at the Greyhound bus station. He was arrested and taken to jail. On that same day, we traveled to Rock Hill, South Carolina, about 25 miles from here. When my seat mate Albert Bigelow and I tried to enter a white waiting room, we were met by an angry mob that beat us and left us lying in a pool of blood. Some police officers came up and asked us whether we wanted to press charges. We said, “No. We come in peace, love and nonviolence.” We said our struggle was not against individuals, but against unjust laws and customs. Our goal was the true freedom for every American.

Since then, America made a lot of progress. We are a different society than we were in 1961. And in 2008, we showed the world the true promise of America, when we elected President Barack Obama. A few years ago, a man from Rock Hill, inspired by President Obama’s election, decided to come forward. He came to my office in Washington and said, “I am one of the people who beat you. I want to apologize. Will you forgive me?” I said, “I accept your apology.” He started crying. He gave me a hug. I hugged him back. And we both started crying. This man and I don’t want to go back. We don’t want to go back. Brothers and sisters, do you want to go back?

REP. JOHN LEWIS: Or do you want to keep America moving forward?

REP. JOHN LEWIS: My dear friends, your vote is precious, almost sacred. It is the most powerful nonviolent tool we have to create a more perfect union. Not too long ago, people stood in unmovable lines. They had to pass a so-called literacy test, pay a poll tax. On one occasion, a man was asked to count the number of bubbles in a bar of soap. On another occasion, one was asked to count the jellybeans in a jar—all to keep them from casting their ballot. Today it is unbelievable that there are Republican officials are trying to stop some people from voting. They are changing—they are changing the rules, cutting polling hours and imposing a requirement intended to suppress the vote. The Republican leader in the Pennsylvania House even bragged that his state’s new voter ID law is going to allow Governor Romney to win the state. That’s not right, that’s not fair, and that is not just. And similar efforts have been made in Texas, Ohio, Florida, Wisconsin, Arizona, Georgia and South Carolina. I’ve seen this before. I lived this before. Too many people struggled, suffered and died to make it possible for every American to exercise their right to vote. And we have come too far together to ever turn back. So, Democrats, we must not be silent. We must stand up, speak up and speak out!

AMY GOODMAN: That was legendary civil rights activist, long-term Georgia Congressmember John Lewis. For a full hour interview with him with Democracy Now!, can go to our website at democracynow.org.

NEXTEx-Mich. Gov. Jennifer Granholm: “In Romney’s World, Cars Get the Elevator, Workers Get the Shaft” 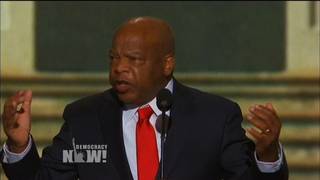