A new report details how corporations are increasingly spying on nonprofit groups they regard as potential threats. The corporate watchdog organization Essential Information found a diverse groups of nonprofits have been targeted with espionage, including environmental, antiwar, public interest, consumer safety, pesticide reform, gun control, social justice, animal rights and arms control groups. The corporations carrying out the spying include the U.S. Chamber of Commerce, Wal-Mart, Monsanto, Bank of America, Dow Chemical, Kraft, Coca-Cola, Chevron, Burger King, McDonald’s, Shell, BP and others. According to the report, these corporations employ former CIA, National Security Agency and FBI agents to engage in private surveillance work, which is often illegal in nature, but rarely, if ever, prosecuted. We’re joined by Gary Ruskin, author of the report, “Spooky Business: Corporate Espionage Against Nonprofit Organizations,” and director of the Center for Corporate Policy, a project of Essential Information.

AMY GOODMAN: We turn to a new report detailing how corporations are increasingly spying on nonprofit groups that they regard as potential threats. The report is called “Spooky Business: Corporate Espionage Against Nonprofit Organizations.” It was released by the corporate watch group Essential Information.

The report found a diverse group of nonprofits have been targeted with espionage, including environmental, antiwar, public interest, consumer safety, pesticide reform, gun control, social justice, animal rights and arms control groups. The corporations carrying out the spying include the U.S. Chamber of Commerce, Wal-Mart, Monsanto, Bank of America, Dow Chemical, Kraft, Coca-Cola, Chevron, Burger King, McDonald’s, Shell, BP and others. According to the report, these corporations employ former CIA, NSA and FBI agents to engage in private surveillance work, which is often illegal in nature, but rarely, if ever, prosecuted.

For more, we go to California, where we’re joined by the report’s author, Gary Ruskin. He’s the director of the Center for Corporate Policy, a project of Essential Information.

Gary, Welcome back to Democracy Now! Explain what you found.

GARY RUSKIN: Thanks for having me on the show again, Amy.

Yeah, we found a tremendous diversity of corporate espionage being conducted against a wide variety of civic groups across the country and the U.K., a case in Ecuador, and in France, as well. So, what we found was a tremendous variety of use of different types of espionage tactics, from dumpster diving to hiring investigators to pose as journalists or volunteers, to electronic espionage, information warfare, information operations hacking, electronic surveillance. And so, this appears to be a growing phenomenon both here in the United States and maybe in other parts of the world, as well.

But our report is an effort to document something that it’s very hard to know very much about. We aggregated 30 different cases of corporate espionage to try to talk about them, but really, each of the cases, we have very fragmentary information. And so, it’s hard to say what we have: What we have is a part of the iceberg; whether it’s the tip of the iceberg or the tippy tip of the iceberg, we don’t really know. It’s hard to extrapolate from what we know.

CHARLIE CRAY: BBI, the defunct private investigation firm, hired subcontractors, including off-duty police officers, who went through Greenpeace’s trash to find useful documents on a regular basis over two years. They did this almost twice a week on average. They also used subcontractors who had colleagues who attempted to infiltrate Greenpeace as volunteers. They cased the Greenpeace office, looking for we don’t know what, but probably doing advance scouting for people who would then intrude upon the property. We found a list of door codes. We found a folder that said “wiretap info,” which was empty. We know this company has subtracted with a company called NetSafe, which is a company that was made of former NSA officials skilled in computer hacking and things like that. So, we really don’t know the full extent of this, but what we’ve seen is incredibly shocking. And our goal is to bring this out into the light of day and to stop it if it’s still going on.

AMY GOODMAN: That was Charlie Cray, senior researcher with Greenpeace USA. Gary Ruskin, if you could respond to that and then go on to talk about Wal-Mart and Up Against the Wall, the nonprofit organization?

GARY RUSKIN: Sure. The Greenpeace example is a great example of what corporate America can bring to bear, the lawlessness that they can bring to bear on nonprofit organizations like Greenpeace, like PETA, like Knowledge Ecology International, you know, Public Citizen and many others. This was a tremendously diverse and powerful campaign of espionage that they targeted Greenpeace with.

And so, you know, there are so many other examples in the report, but you mentioned Wal-Mart has a very large internal security operation, and so we know of a case, for example, where they planted essentially a person with a bug in a meeting of people organizing about Wal-Mart. And then, as well, they had a van that was able to surveil some other activities, protest activities, as well.

But there are just so many—so many other stories we can tell from the report. I mean, another famous one was the largest operator of nuclear power plants in the world. Électricité de France was caught with a copy of a Greenpeace hard drive on one of its contractors’ computers, because they had hacked into Greenpeace France. So, there are just so many stories we can tell from the report.

AMY GOODMAN: And how does it go from spying to interrupting the activity of these organizations? And also, if you could talk about the spying on Occupy Wall Street?

GARY RUSKIN: Sure. Well, what we found in some of the cases is there are spies that actually, you know, actively participate in an organization. For example, one of the most famous cases was a woman whose real name was Mary Lou Sapone, but went by Mary McFate, and was very active in the gun-control movement for quite a long time and ran for the national board of directors of a prominent gun organization, worked a bunch with the Brady Campaign and the like. But she was totally a spy. Another example was there was—

AMY GOODMAN: A spy for?

GARY RUSKIN: A spy probably for the NRA. And then there are other kind of pretty well-known examples, like, for example, there was a former congressman, the late Congressman Henry Hyde, who was also a bank director at a bank. He didn’t pay—the bank went belly up, and he was the only bank director who did not pay the settlement for the bank going defunct. And he had a lawyer dispatch a journalist, or someone who posed as a journalist, to get information from the guy who uncovered so much of this wrongdoing. So—

AMY GOODMAN: Well, Gary Ruskin, we’re going to continue cover this issue. We’re going do part two of the interview and post it online at democracynow.org. Gary Ruskin is director of the Center for Corporate Policy, a project of Essential Information. We’ll link to the report, “Spooky Business: Corporate Espionage Against Nonprofit Organizations.” 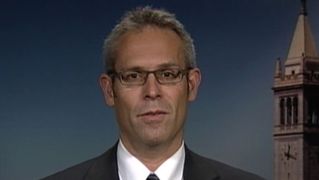