The Supreme Court has agreed to take on cases that could decide if corporations can ignore parts of federal law based on the religious beliefs of their owners. The cases center around the controversy over whether for-profit corporations must fully cover birth control in the health insurance they provide for their employees. Two companies — Hobby Lobby and Conestoga Wood — object to provisions in the Affordable Care Act requiring companies to provide contraceptive coverage in employees’ health plans. The firms say they oppose birth control mandates on religious grounds. The case could force a rehashing of the landmark Citizens United decision, which ruled companies have freedom of expression rights that allow unlimited spending on political campaigns. The court could now decide whether companies also have religious freedom rights. We are joined by Brigitte Amiri, senior staff attorney with the Reproductive Freedom Project at the American Civil Liberties Union.

JUAN GONZÁLEZ: On Thursday, the Supreme Court announced it will wade into the controversy over whether for-profit corporations must cover birth control in the health insurance they provide for their employees. The Obama administration argues that under the Affordable Care Act, an employee’s decision to use her health coverage to pay for a particular service cannot be attributed to her employer. It’s also said contraceptive coverage is key to ensuring both public health and women’s equality.

In one of two cases the court will hear, known as the Conestoga Wood case, a Mennonite furniture business wants the court to determine whether the birth control requirement violates both the Religious Freedom Restoration Act and the company’s rights under the First Amendment.

AMY GOODMAN: The court will also hear a case brought by Hobby Lobby, a chain of arts and crafts stores with more than 13,000 employees.

It’s good to have you with us. Can you just lay out the significance of the court taking up this case?

BRIGITTE AMIRI: Sure. I think the case is very significant for several reasons. I think this is the first time that we’ll have the Supreme Court decide whether religious liberty rights can be used to trump anti-discrimination laws. And we, the ACLU, have been filing briefs in this case, arguing that those religious liberty rights cannot trump anti-discrimination law, as the companies are arguing here.

JUAN GONZÁLEZ: Now, at the heart of this is whether a corporation is, again, a person, in terms of religious freedom now, but isn’t the whole idea of creating a corporation that you will create an entity separate from you as an individual?

BRIGITTE AMIRI: Well, certainly one of the cases—one of the questions in the cases is whether a corporation is a person under the Religious Freedom Restoration Act. And the courts in the appeals courts have been split on this issue, and so it’s also important that the court, the high court, is going to resolve this issue. But certainly that’s one of the big issues in this case. The ACLU has argued that even if a corporation could have religious liberty rights, those corporations cannot invoke their religious beliefs to take away a benefit from their female employees.

AMY GOODMAN: What does this mean for the Affordable Care Act?

BRIGITTE AMIRI: Well, for the larger Affordable Care Act, I’m not sure exactly how far the repercussions will be felt. Certainly, if the government is successful in the Supreme Court, that will be tremendous, not just for the millions of women who stand to benefit from the contraceptive rule coverage, but also will put an end to any sort of argument that corporations could use their religious beliefs to try to carve out other services, too, that they might disagree with.

AMY GOODMAN: What if an employer didn’t like the fact that you had AIDS, and so they said, “I’m not going to cover AIDS drugs”?

BRIGITTE AMIRI: That’s one of the very real possibilities, that if the court doesn’t side with the government here—or if a Jehovah’s witness owns a company, and they decide not to cover blood transfusions. There’s a long line of very dangerous precedent, all of which would undermine the Affordable Care Act’s goal of ensuring healthcare for all Americans.

AMY GOODMAN: Let’s go quickly to the Hobby Lobby founder and CEO, David Green, who challenged the law—this is the case that’s going to the Supreme Court—talking about his company’s position in a video posted online.

STEVE GREEN: The beliefs that we’ve had, that we have grown up with all our lives, are convictions that we have that we live by personally. And as we have ran our business, we feel the obligation or the desire that we want to use those same principles within our business. It would not be consistent for us to live one way at home and then accept a different way at work.

DAVID GREEN: We do everything we possibly can to be a help to our employees of how that they can structure their life based on biblical principles. It’s not something that’s forced on anybody, but it’s there for them if they would like.

AMY GOODMAN: Brigitte Amiri, if you could respond?

BRIGITTE AMIRI: Sure, absolutely. Everyone is entitled to their own religious beliefs and are free to worship in whatever way that they choose. But when you decide to open a business and employ 13,000 employees, as Hobby Lobby does, then you don’t have the right to use those religious beliefs to take away a benefit from those employees, just as you wouldn’t have a right to discriminate against them based on their race or their sex or their sexual orientation.

JUAN GONZÁLEZ: Now, the—you mentioned before the contradictory appeals court decisions. What—in those two decisions, what did the courts rule each way?

BRIGITTE AMIRI: They are split in their determinations. So, the Hobby Lobby court out of the 10th Circuit held that corporations are persons under the Religious Freedom Restoration Act and also that Hobby Lobby was likely to fully succeed on the merits of their case by showing that their religion was burdened and there was no compelling government interest to justify that burden. The Conestoga Wood case found the opposite, in answering the threshold question, that corporations are not people capable of exercising religious liberty rights.

BRIGITTE AMIRI: It’s really hard to say. We obviously don’t know what the Supreme Court does any time they take a case. We hope that the Supreme Court will follow a long line of cases over the last several decades that have held that you can’t use religious liberty to trump anti-discrimination laws.

AMY GOODMAN: Well, we want to thank you for being with us, Brigitte Amiri, senior staff attorney with the ACLU Reproductive Freedom Project.

And that does it for our show. First we want to congratulate our camera man, Carlo de Jesus, and his new wife Lisa. They were married over the weekend. We wish them a very happy holiday in the Philippines, though that may be a little tough right now, given the weather there. And a very early happy birthday to Steve Martinez and to Deena Guzder. 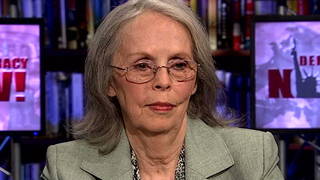