Live from Prison: Jason Hernandez Thanks Obama for Commuting His Drug Sentence, Hopes “More to Come”

We speak with Jason Hernandez of McKinney, Texas, about his reaction to being one of the eight inmates whose sentences were commuted by President Obama on Thursday. “It’s a dream come true. I just hope this is the beginning of more to come,” Hernandez says in a phone call from prison. He describes how he was sentenced to life in prison without parole in 1998 for his role in a drug conspiracy starting when he was only 15 years old. Hernandez says he was with the prison warden when he heard the news and that he hopes President Obama and Congress will “decide to do more for the other individuals in here” who were sentenced under similarly harsh drug laws for nonviolent offenses.

AMY GOODMAN: It looks like—it looks like we have Jason Hernandez on the phone right now. Jason Hernandez of McKinney, Texas, sentenced to life in prison in 1998, has been serving life without parole since age 21 for his role in a drug conspiracy, starting when he was only 15, one of 18—he was one of eight prisoners whose sentences were commuted by President Obama Thursday.

Welcome to Democracy Now! How do you feel, Jason?

JASON HERNANDEZ: Elated. I mean, it’s a dream come true. And I’m just—I just hope that this is the beginning of more to come. I mean, I’m happy for what was given to me by the president, but it’s kind of like a bittersweet moment because there’s other individuals in here who I believe that are more deserving than me. And they just didn’t—they didn’t believe that something like this could happen. But now they believe. And I just hope that, you know, the president and other lawmakers decide to do more for the individuals in here, because—you know, my mother and father, this Christmas, when they come visit me, and my family, my son, they’re going to be crying, but it’s going to be tears of joy. But at the same time, I’m going to have to look at other individuals’ mothers and fathers and kids crying at visitation, and their cries are going to be for sorrow. So, I just hope—I mean, I’m grateful for what the president has done, but I hope there’s more to come.

JUAN GONZÁLEZ: And, Jason, if you could briefly tell us, in terms of the particulars of your case, how you ended up there?

JASON HERNANDEZ: Well, I just—I started selling joints and dime sacks on the corner. I mean, at the time, in 1992, when I started selling drugs at the age of 15, it was just—it was the thing to do. It was popular. I mean, there was—I mean, the community I grew up in is kind of—you don’t see selling drugs as wrong. It’s like what everybody does. And when you’re a kid, you just—you follow the norm. And that’s what I grew—I mean, I make no—there’s no excuse for my conduct. I hate to say that I’m a product of my environment, but when you’re a kid and you’re growing up in an environment like that, I mean, that’s what—there’s a good chance that that’s what you’re going to become. And I just—

OPERATOR: This call is from a federal prison.

JASON HERNANDEZ: I just was just selling drugs—not major amounts, but, I mean, it was a conspiracy—under the terms of the law, it was a conspiracy. But it’s not nothing that you would figure that you would see like on TV or nothing, a real network or cartel-related or gang-related. It was just a bunch of group of friends that we just grew up together, and we sold drugs together. And—

AMY GOODMAN: Jason, we just have 30 seconds. Where were you yesterday when you got the news?

JASON HERNANDEZ: I was in the warden’s office. I thought he was playing. I told him, “Are you serious? Can you check the—I mean, the computer? Because maybe it’s a hoax or something.” I mean, I’ve seen a guy—some guys escaped a couple months back from Florida. And I said, “Man, maybe somebody is playing a game. Can you show me the computer list? Can we verify this?” And he says, “Yeah. You’ve got a 20-year sentence. It’s right here on the BOP website.” So, I cried. I cried and shaked. And I’m still shaking, I mean.

AMY GOODMAN: Well, Jason, congratulations, and thanks so much for joining us. Jason Hernandez had his sentence commuted by President Obama yesterday. He has been serving life without parole since age 21. 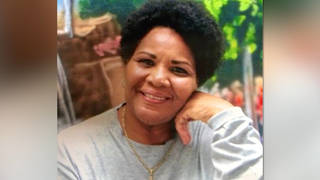