New Yorkers joined the global movement of One Billion Rising to gather and dance on Valentine’s Day in order to call attention to violence against women. “If a man knows a woman who is victim or survivor, then he knows what that is like, because it will affect her for the rest of her life,” said Jerin Arifa, with the National Organization for Women, who danced in Union Square. “It will affect her productivity, the way she can love again, the way she can trust again. It will affect them also.” At another event in Times Square, dozens of people organized a “We Will Not Be Silent” protest. “I feel like all revolutionary causes should start with addressing misogyny,” noted actor Ezra Miller, one of many men who participated in the campaign. Ezra Miller is best known for his roles in the films, “The Perks of Being a Wallflower” and “We Need to Talk About Kevin,” as well as the hit TV series “Californication.”

See this year’s interview with Eve Ensler, founder of V-Day, on Thursday’s Democracy Now!, when we also featured several videos by celebrities who lent their voice to cause.

See all of our past interviews with Eve Ensler, author of The Vagina Monologues and founder of V-Day, which marks its 15th anniversary this year.

EZRA MILLER: My name’s Ezra Miller, and I’m here with the One Billion Rising action in Times Square, joining many people all across the planet in a hope to end the rape culture. One in three women in the world will experience domestic violence or rape in the course of their lifetime. To me, I grew up in a house full of women. I feel like all revolutionary causes should start with addressing misogyny.

LAURIE ARBEITER: I’m Laurie Arbeiter. We run a language project called We Will Not Be Silent. People are coming—women, children, men—and they’re holding up signs: “End Rape,” “End Sexual Violence,” “We Want Power,” “We Want Love.” We’re here on Valentine’s Day, but there’s nothing sentimental about this. It’s embedded in something very profound that I think in every heart is felt.

YVETTE MARTINEZ: My name is Yvette Martinez. What brings me here is that I’m sick and tired of hearing all these stories of, like, women and young girls being abused, as well as boys, young kids. And I work with children, and I’m also a victim. So, to me, this is such an important issue that I think it needs to stop.

MICHAEL EXTRACT: My name is Michael Extract. So I was probably one of the few men dancing in the window. More men could come out and do this. I think it’s also important for men to do two things: one, to demonstrate behavior, particularly to our children, you know, men to their sons, to show them how do you treat women well, how do you treat a woman with great respect; and then another is to go out and to say to other men, “No, we won’t stand for this,” support laws that help women, that stop this kind of violence. 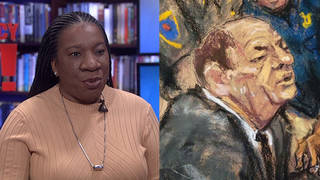