A federal appeals court has ruled the government can continue to keep secret its efforts to pursue the private information of Internet users without a warrant as part of its probe into the WikiLeaks. The case involved three people connected to the whistleblowing website whose Twitter records were sought by the government, including computer security researcher Jacob Appelbaum and Icelandic parliamentarian Birgitta Jónsdóttir. The ACLU and the Electronic Frontier Foundation, which represented the account holders, argued that the subpoena violated their privacy rights and they should know why the government wanted their information. [includes rush transcript]

NERMEEN SHAIKH: A federal appeals court has ruled the government can continue to keep secret its efforts to pursue the private information of Internet users without a warrant as part of its probe into the whistleblowing website WikiLeaks. The case involved three people connected to WikiLeaks whose Twitter and email records were sought by the government, including computer security researcher Jacob Appelbaum and Icelandic parliamentarian Birgitta Jónsdóttir .

AMY GOODMAN: The ACLU and the Electronic Frontier Foundation, which represented the account holders, argued that the subpoena violated their privacy rights, and they should know why the government wanted their information. However, late last month, the court rejected a request to unseal all orders relating to the three individuals that may have been sent to companies other than Twitter.

For more, we’re joined by Jacob Appelbaum himself. He’s a developer and advocate for the Tor Project, system enabling its users to communicate anonymously on the Internet.

Jacob Appelbaum, welcome to Democracy Now! I’m glad we didn’t have to subpoena you to get you here.

JACOB APPELBAUM: Well, I imagine I would have to know about it in order to show up, so…

AMY GOODMAN: Well, talk about this federal court ruling that came down two Fridays ago.

JACOB APPELBAUM: Essentially, we—we lost, actually, quite some time ago about the data being revealed to the U.S. government—that is, metadata. And the government essentially argues that metadata is not the same as content, therefore they can issue an administrative subpoena, a so-called 2703(d) order, and this administrative subpoena has a much lower bar than, let’s say, a search warrant. And it can also have a gag. In fact, most of them seem to have a gag. Twitter was able to unseal this so that we could begin to fight it. We lost. And it’s quite sad. They received the data. But we appealed again about secrecy of docketing. That is to say that we believe that courts should have to keep accurate records of this type of an order and other orders like it. And we were hoping that we would be able to learn that there were other companies out there and that we would be able to challenge this fishing expedition.

AMY GOODMAN: Explain what happened to you. Why did they get your account, all your information in Twitter?

JACOB APPELBAUM: Well, I mean, many people from the government have said, during detainments and other times in which they have confronted me, that I should understand why this is happening. But the reality is that I don’t understand why it’s happening, in a legal sense—at least until now. Now the government argues that I should understand that this is the case, and it’s this case because it’s as secret as a grand jury proceeding. And there is, in fact, a WikiLeaks grand jury, where they have been pressuring people. In some cases, people have been threatened with, effectively, indefinite detention, if they don’t comply, that, you know, they let people know there’s really not—

AMY GOODMAN: What does it mean to comply?

JACOB APPELBAUM: Well, if they ask them a question, they’ll either forcibly immunize them or they will—maybe they’ll, you know, threaten them with just detaining them without really explaining what will happen. There’s a lot of pressure coming from a lot of different angles. So, what the government is effectively saying with this ruling is that they want to have not just secret laws and secret interpretations, but no accountability. And this is something which I think is pretty scary, and I think we should have public laws, public interpretations and public accountability. And this is—what we see is more of the same. I mean, we see this with the targeted assassination, the indefinite detention in NDAA. And this is just the Internet version of that, where they’ve decided they don’t even have to get a search warrant, and I have no right to resist it.

JACOB APPELBAUM: Well, I think in the United States the gloves are off. And when I was here with Bill Binney last, I think he pretty much explained that this is the case.

JACOB APPELBAUM: Yeah, I mean, the secret interpretation of Section 215 of the PATRIOT Act seems to be that anything that the government wants is fair game without a warrant. And that’s terrifying. And this seems to be the tip of the iceberg. You know, as we know from that video with the FBI woman that I met, she seemed to indicate that there was a national security letter. So I think these 2703(d) orders, they’re important to be considered as the tip of an iceberg of an investigation, so there are probably other types of legal orders. And so, I think it’s important to stress: Metadata in aggregate is content.

AMY GOODMAN: If people are having trouble understanding you, metadata in aggregate is content.

JACOB APPELBAUM: It’s—yeah, absolutely. What that means is that if you look at one event, that I talk to you via email, in theory, that we talked is a piece of metadata. The content—that is, what I wrote in the email—that is, in theory, protected, and you need a search warrant for it. But if they know that I talk to you every single morning, that tells a story, maybe even, you know, a really important story. And maybe if they see that I talk to Dan or they see that I talk to other people, that also tells a story that is equal to content when it’s viewed in an aggregate. And that’s something that’s quite terrifying, because the court doesn’t seem to recognize that, nor do they recognize the location privacy issues with the Internet. And that is to say, they watch and see every place that I’ve been. They get this data, and then they have a tracking device, effectively. Now, in my case, I use the Tor network in order to protect my location anonymity needs, but most people don’t, and they expect the rule of law to do that for them. So imagine their surprise when it doesn’t.

NERMEEN SHAIKH: Well, WikiLeaks founder Julian Assange was awarded the Yoko Ono Lennon Courage Award for the Arts in absentia this weekend. Assange remains holed up in the Ecuadorean embassy in London, fighting extradition to Sweden. In a ceremony at the Museum of Modern Art, artist and activist Yoko Ono paid tribute to Assange.

YOKO ONO: This 2013 Courage Award for the Arts is presented to Julian Assange. With your courage, the truth was revealed to us—thank you—and gave us wisdom and power to heal the world. On behalf of the suffering world, I thank you. Yoko Ono Lennon. Thank you.

NERMEEN SHAIKH: That was Yoko Ono giving an award to Julian Assange in absentia. Jacob Appelbaum, could you comment—

AMY GOODMAN: You were there.

NERMEEN SHAIKH: —on Assange’s case? You were there.

JACOB APPELBAUM: Yeah, I think Julian Assange is a—he’s a hero. And, you know, he’s a personal friend of mine, and I think that people should support him. And I believe that that award from Yoko Ono is quite an honor, and I’m really happy to see so many people supporting Julian. And I hope that the British government will grant him safe passage to Ecuador, as he is effectively a political prisoner in Her Majesty’s surveillance state.

AMY GOODMAN: In fact, at the Museum of Modern Art, the Ecuadorean foreign minister was also there to honor Julian Assange, as was Dan Ellsberg, who is sitting in our studio, as well. 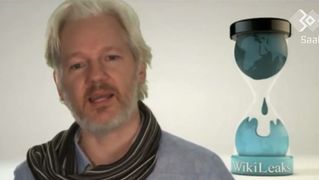