Pandora’s Lunchbox: Pulling Back the Curtain on How Processed Food Took Over the American Meal

We look deep inside the $1-trillion-a-year “processed-food-industrial complex” to examine how decades of food science have resulted in the cheapest, most addictive and most nutritionally inferior food in the world. The vitamins added back to this packaged and fast food — which amounts to 70 percent of calories consumed in the United States — come from nylon, sheep grease and petroleum. We are joined by longtime food reporter Melanie Warner, author of “Pandora’s Lunchbox: How Processed Food Took Over the American Meal.” [includes rush transcript]

Web ExclusiveFeb 28, 2013Melanie Warner on How Processed Food Took Over the American Meal

AMY GOODMAN: As we continue deep inside the $1-trillion-a-year “processed-food-industrial complex,” we turn to look at how decades of food science have resulted in the cheapest, most abundant, most addictive and most nutritionally inferior food in the world. And the vitamins and protein added back to this processed food? Well, you might be surprised to know where they come from. That’s the focus of a new book by longtime food reporter Melanie Warner, author of Pandora’s Lunchbox: How Processed Food Took Over the American Meal.

Melanie, welcome to Democracy Now! She’s joining us from Denver, Colorado. Vitamins, vitamin-added food. You think you go to the grocery store, and you want to get a little added punch, and you want to ensure that your kids, that your family, has added vitamins. What’s the problem with that?

You know, one of the things with processed food that I found while doing this book, is not only that it has an abundance of the things that Michael was talking about—salt, sugar, fat—it’s also what it’s lacking, which, it turns out, is naturally occurring nutrition, in many cases. So that’s vitamins and minerals and fiber and things like antioxidants.

So, you take something like cereal—you know, you walk down the cereal aisle, and you’re bombarded with health messages: It’s high in vitamin D, a good source of calcium, fiber, antioxidants. You see these things all over the package. And one of the things—one of the questions I asked myself when I was starting to work on this book was: Why is it nearly impossible to find a box of cereal in the cereal aisle without vitamins, added vitamins and minerals, in the ingredient list?

And it turns out, because most cereal has very little inherent nutrition. And this is in part because of processing. The processing of food is very intensive. It’s very—it’s very technical, and with cereal, can be very damaging to naturally occurring nutrients, especially vitamins and oftentimes fiber. So, what manufacturers do is they add back in vitamins. So, essentially, you see all these wonderful claims on the package, but essentially—and you look at the panel, and you’re getting 35 percent and 40 percent of your recommended daily allowance of these vitamins, but they’re essentially added in like a vitamin pill, which many people maybe are already taking in the morning.

And I was really surprised to learn where some of these vitamins come from. I never really thought about it in much detail, as probably most people don’t. But it turns out that they’re—these vitamins are not coming from the foods that contain them. Like vitamin C does not come from an orange, and vitamin A does not come from a carrot. It’s very far from that. They come from things that really aren’t actually foods. Vitamin D, for instance, was probably the most shocking. It comes from sheep grease, so actually the grease that comes from sheep wool. You have giant barges and container ships that go from Australia and New Zealand over to China, where most of—a lot of our vitamins are produced. About 50 percent of global vitamin production comes from China inside these huge factories, very industrial processes. A lot of vitamins are actually chemical processes.

AMY GOODMAN: A lot of people, if they’re with someone, they’re looking at them right now. Wait a second. So, China gets all these shipments of sheep wool from Australia, and they’re pulling the sheep grease off of them to make vitamin D?

MELANIE WARNER: Yeah, sheep grease is actually very useful for a lot of things. It can be used to make moisturizer in lip balm. It can be used for industrial purposes, for lubricants for engines and machines and things like that. But one of its uses is to be converted, through a number of chemical steps and chemical processes, to vitamin D, which is added to our food and used in supplements. So, yeah—

AMY GOODMAN: What about—

MELANIE WARNER: —it’s just one of—

AMY GOODMAN: What about nylon, Melanie? What does nylon have to do with vitamins?

MELANIE WARNER: Yeah, it’s one of—it’s one of these chemicals that goes into the making of one of the B vitamins. It’s many—there are many food additives, actually, that are used in food but actually also have industrial purposes associated with them. One of my favorites is a chemical called, a food additive called azodicarbonamide, and that’s actually used quite extensively in bread and bread-type products, and it’s used as a dough conditioner and a manufacturing aid. And its main use outside of the manufacturing of bread is for creating foamed plastic, so things like yoga mats.

And I encountered some news articles a number of years ago where a tanker truck overturned on the Dan Ryan Expressway in Chicago carrying azodicarbonamide. And city fire officials had to issue their highest hazmat alert and evacuate everyone up to a half mile downwind because of this chemical spill. So you look at something like that, and you wonder: Is this something that we really want in our morning toast and our—the bread that goes on our turkey sandwiches?

AMY GOODMAN: Well, that’s a very important question. Now, of course, the processed food industry, the gross sales are enormous, but you may have redefined “gross” sales. Let’s talk about some of the experiments the scientist Melanie Warner conducted. Talk a little about chicken tenders.

MELANIE WARNER: Yeah, I’m not much of a scientist, but a number of years ago, when I started covering the food industry, I became curious about expiration dates that are printed on packages. Pretty much you to go into the supermarket, and every package in the store will have an expiration date on it. And I wondered: Well, what will happen? What do these expiration dates mean, and what will happen after this date has come and gone? Some of these dates are actually quite far out; they’ll be six to nine months or even more.

So I started collecting a number of food products, and I saved them in my office. And then I would open them after the expiration dates had passed, sometimes long after the expiration dates had passed because I had forgotten about them. And what I found out over time—I collected all kinds of products: cereal, cookies, Pop-Tarts, fast-food meals, frozen dinners, I mean, you name it. I have all kinds of gross stuff in my office at this point.

And what I found—there were a few exceptions—but what I found was that most of this food did not decompose or mold or go bad, even after long, long periods of time. I mean, I started this seven, eight years ago, and I still have slices of cheese that are perfectly orange, processed cheese.

AMY GOODMAN: —you know, maybe even a Whole Foods-type store, you know, a natural food store—

AMY GOODMAN: —and your own guacamole, and the difference how long it’s preserved.

MELANIE WARNER: Yeah, I think this was an unusual tub of guacamole, and it had an unusual dose of food additives. My husband came back from the store with it one day and said, “Oh, they announced—made an announcement that they made it fresh over at the deli.” So I thought, “Oh, this is great.” And I looked at the ingredients, and there were some ingredients on there that I had never even heard of. And I was spending a lot of time doing research on food additives. So I kind of—I put it away, I stored it in the fridge. And I thought, “Well, I’ll look into this later and see what these additives are.”

And then, an interesting thing happened about nine months later. I completely forgot about it in the back of the fridge. My mom, who lives with us, she announced that she had tried some of the guacamole. And I thought she was referring to a recent purchase that I had made at a different store that we had bought for a party. But I thought, you know, I think a lot of that’s—that’s gone. And it turns out that she had tried the old guacamole, the nine-month-old stuff. And I was horrified, because she’s an older person, she’s in her early eighties, and food-borne illness in older people is no small thing. So I was terrified that she was going to be horribly ill. In fact, she wasn’t. She was—

AMY GOODMAN: Because the guacamole was how old?

MELANIE WARNER: Nine months. It was nine months old, yeah. So—and she had eaten it because it had no mold on it, it didn’t smell bad. It was a little bit—when I looked at it, it was a little bit discolored around the edges, you know? So some people might have thought, “Oh, maybe I’m not going to eat it.” But she looked at it and thought, “Oh, this is a nice guacamole.” So… And in the end, thankfully, she had only had a little bit, and she was totally fine. She had no effects whatsoever.

AMY GOODMAN: Melanie, 15 seconds before we end part one of this discussion. What most surprised you?

MELANIE WARNER: I was very—

Juan González will be in Phoenix tonight, in Albuquerque, as well in Santa Fe. Check our website at democracynow.org.

Melanie Warner on How Processed Food Took Over the American Meal 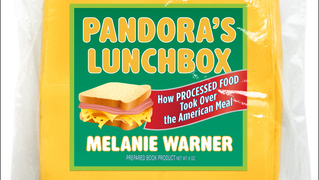 Melanie Warner on How Processed Food Took Over the American Meal