A new report has revealed the U.S. government refused or censored Freedom of Information Act requests from the public more last year than at any other time during the Obama presidency. The Associated Press analysis determined that the Obama administration cited legal provisions for withholding information more often in 2012 than in any previous year — especially a rule intended to protect national security. The CIA denied 60 percent of information requests in 2012, compared to 49 percent a year earlier. We speak to Jack Gillum of the Associated Press and Alexander Abdo of the American Civil Liberties Union. [includes rush transcript]

AARON MATÉ: A new report has revealed the U.S. government refused or censored document disclosure requests from the public more last year than at any other time during the Obama presidency. The Associated Press analysis determined the Obama administration cited legal provisions for withholding information more often in 2012 than in any previous year, especially a rule intended to protect national security. The report also found the administration answered the largest number of requests for copies of government documents and slightly decreased its backlog of requests from previous years. The CIA was the most secretive agency, denying 60 percent of over 3,500 requests for information, compared to 49 percent a year earlier.

AMY GOODMAN: The Associated Press report is based on a review and comparison of the administration’s level of responsiveness to Freedom of Information Act requests, often interpreted as a measure of the federal government’s transparency.

For more, we are going to go to Washington, D.C., to speak to the author, Jack Gillum, a reporter in Washington, D.C., bureau of the Associated Press. He’s co-author of the piece, just out, headlined “US Citing Security to Censor More Public Records.”

Welcome to Democracy Now!, Jack. Start off by just telling us what you found.

JACK GILLUM: Well, this is sort of the—this is the fourth year and going into the second term of the Obama administration, and every year the Associated press takes a census of not only the requests that have been—that the public has asked for—and as you mentioned, it’s the largest, about more than 600,000 that they had processed last year—but also how well they’re doing with it. And on one hand, while the government gets to—gets exactly nine different exemptions under the law that they can redact things, whether it’s for national security or law enforcement or internal deliberative processes, there’s also ways that they have released records, either in, what we call, in full or in part. So, they’ll black it out with that sort of infamous black marker that you see—we call it like a redaction—or they just won’t give you over the records.

And a couple of interesting things we found this time around was that, particularly with the Defense Department and the CIA, there was an uptick in the number of times that the administration had cited B—it’s called (b)(1). In FOIA terms, it’s Exemption 1; it’s a national security exemption. The CIA increased by 10 percentage points. The Defense Department had done it by about a thousand more times, even though they had received fewer requests. And it’s sort of a benchmark at the end of Obama’s first term. This is the same president, as we all remember, who, the second day in office, had sent a memo to his executive branch agency heads and said, “Look, this is the FOIA. This is the public’s right to know, their signature right-to-know law from 1967. In the face of doubt, openness prevails.” And what we found is it’s a challenge sometimes for the administration, particularly with current events, you know, how they balance security with releasing documents to the public.

AMY GOODMAN: We’re also joined in New York by Alexander Abdo, staff attorney at the National Security Project of the American Civil Liberties Union. Can you talk about the significance of what Jack Gillum found at AP?

ALEXANDER ABDO: Sure. You know, I think the numbers tell a very compelling story, particularly given that this administration came into power in 2009 promising a new era of transparency. But perhaps even more important than the fact that claims of national security are on the rise is the type of information that the government is trying to keep secret. The Obama administration has dramatically increased claims to keep secret law, its understanding of its legal authority. We’ve seen, for example, the government refuse to disclose the legal basis upon which it can kill U.S. citizens abroad. We’ve seen it refuse to disclose basic understandings and interpretations of its dramatically expanded surveillance authority since September 11, 2001. And so, as corrosive as secrecy is generally toward democracy, I think particularly corrosive is the type of secrecy we’ve seen under the Obama administration.

AARON MATÉ: You mentioned the memos on drone killings. What are some of the other key documents that you think the public should be able to see?

ALEXANDER ABDO: Well, for two years now, a handful of senators and congressmen have been sounding the alarm bells about secret interpretations of the PATRIOT Act. The PATRIOT Act, as you know, expanded the government’s ability to conduct surveillance on Americans’ communications, and there have been secret interpretations of that law that senators have been warning us for a couple years, which shock ordinary Americans. I think that’s a particularly troubling development. It’s one that we still have very little clarity on from the administration or from anyone in government.

And there are similar surveillance programs that we know very little about. You know, in the drone context, secrecy is concerning because people are being killed. But at the same time, it’s hard to hide the fact that people are being killed, and so at some point the government, I think, will be forced to do the right thing, either by courts, by Congress or the public. With surveillance, I’m particularly troubled because the harm is often intangible. People’s communications are swept up in a massive dragnet. The NSA keeps those communications for years in enormous databases, with very little transparency about what’s going on and very little opportunity for Americans to comment on what’s going on, because they just don’t know.

AMY GOODMAN: Jack Gillum, can you talk about the number of requests that are going to the National Security Agency about warrantless wiretapping?

JACK GILLUM: Sure. Well, we don’t—that’s the thing about when things are secret, is we don’t really know the full extent of what they ask for. In fact, about half of the 2,300 or so exemptions that the Pentagon cited and stamped “national security” on came from the NSA, which was an increase over last year. And what this sort of creates for—you know, I mean, like I said, the government has this delicate balance to do at times between what a requester—say, a news organization or a member of the public—I mean, it is—this is, after all, Sunshine Week, when each sort of year in March, when news organizations and nonprofits, you know, celebrate openness in government and file FOIA requests, where they have to balance that with, “Hey, look, is this legitimate national security?” And, you know, we don’t know what we don’t know in some cases, which, you know, some might call disturbing; some might say, “Well, hey, look, maybe people are asking for more information about drone strikes, maybe they’re asking for proprietary information of the NSA, which is a very secretive organization in Fort Meade, Maryland, and in some ways has to be.” But that increase, at the same time, sort of, to some of the people that we talked to, seems to run counter, at least on its face, with this sort of new pledge of openness and transparency in government.

And there’s that third way that a lot of times people don’t really realize in public records requests, where it’s called segregability, where you can—just because a record may be exempt or information in it may not be releasable, they can black out some of it and give you the rest of it. There have been, you know, cases across the government this year, like there have been in many years, where the entire document is in fact removed from disclosure or where they’ll go so far sometimes to not either confirm or deny that such a record exists.

AMY GOODMAN: What most surprised you in this report?

JACK GILLUM: I think there—it’s sort of a mixed bag, what surprised me. I think the increase in national security exemptions was one. There’s another one, it’s called Exemption 5, and it’s this deliberative process, sort of the internal discussions, attorney-client work product of the administration, went up, I would—to about 60-or-so thousand, an increase—sort of a market increase from the last couple of years. This is after the administration had said, in its first year in office, “Hey, look, agencies, you can’t really use this—you know, this exemption is a catch-all—because you don’t want to release records.” We saw it increasing there.

We also saw a couple of things where not just what the records are being withheld, but that it took a little longer to get those records back to the public. I mean, the most, I guess, remarkable thing we found is that the State Department, where requests were asked for expeditiously, which is a provision under the Freedom of Information Act, that if somebody’s life is in danger or for a news organization if you’re covering a breaking story, on average—and that’s an average—those records got back to the public within two years. And that’s “years” with a Y. So, you know, you talk to some government folks who say, “Hey, look, we are processing more requests—

JACK GILLUM: — “than we have ever done before.” So—

AMY GOODMAN: Jack Gillum, we want to thank you very much for being with us, reporter in the Washington, D.C., bureau of Associated Press, co-author of “US Citing Security to Censor More Public Records.” We’ll link to it at democracynow.org. And thanks so much, Alexander Abdo with the ACLU. 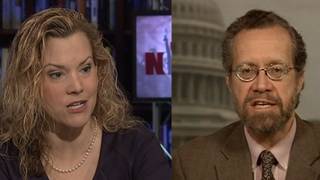