Over 100 Guantánamo Prisoners on Hunger Strike, Citing Threat of Return to “Darkest Days Under Bush”

More than 100 detainees held in the U.S. military prison at Guantánamo Bay are reportedly entering their fifth week of a hunger strike sparked by deteriorating conditions. News of the hunger strike first emerged last week, but it appears the action involves far more prisoners than previously thought. In a letter to his attorney, one detainee wrote: “We are in danger. One of the soldiers fired on one of the brothers a month ago. Before that, they send the emergency forces with M-16 weapons into one of the brothers’ cell blocks. … Now they want to return us to the darkest days under [George W.] Bush. They said this to us. Please do something.” We’re joined by Pardiss Kebriaei, senior staff attorney with the Center for Constitutional Rights and counsel for one of the hunger strikers. [includes rush transcript]

StoryFeb 22, 2013“The Terror Courts”: An Inside Look at Rough Justice, Torture at Guantánamo Bay

NERMEEN SHAIKH: More than a hundred detainees held in the U.S. military prison at Guantánamo Bay, Cuba, are reportedly entering their fifth week of a hunger strike against deteriorating conditions. News of the unrest comes as U.S. military officials have confirmed a guard fired rubber bullets at detainees in January for the first time in the prison’s history. The incident took place on a soccer field for cooperative captives when, authorities say, a detainee sought the attention of a guard in a watchtower who controlled a gate leading to a pathway back to the prison. The detainee allegedly tried to scale the fence.

Meanwhile, more information about the ongoing hunger strike has begun to trickle out in letters from detainees. Some say Arabic interpreters have searched their Qur’ans in ways that constitute desecration according to their religious beliefs. Others report guards have been taking away detainee possessions.

AMY GOODMAN: Yemini detainee Bashir al-Marwalah wrote in a letter to his lawyer, quote, “We are in danger. One of the soldiers fired on one of the brothers a month ago. Before that, they send the emergency forces with M-16 weapons into one of the brothers’ cell blocks. … Now they want to return us to the darkest days under Bush. They said this to us. Please do something,” he wrote. Lawyers for the detainees say some prisoners who have refused to eat for weeks in protest are now “coughing up blood” and “losing consciousness.”

For more, we’re joined by Pardiss Kebriaei, senior staff attorney with the Center for Constitutional Rights. She spoke last Thursday with her client Ghaleb Al-Bihani, who is one of the hunger strikers. Welcome to Democracy Now!

AMY GOODMAN: Can you tell us what he said? We now hear that well over a hundred of the 166 prisoners are on this hunger strike.

PARDISS KEBRIAEI: He said what we’ve heard from every other detainee who has communicated with his lawyer since February, which is that there is a large-scale hunger strike in Camp 6, which is the largest of the facilities at Guantánamo. That prison holds about 130 men. He said that almost everyone, except for a few who are sick and elderly, are on strike.

He himself had lost over 20 pounds. He is a diabetic. His blood glucose levels are fluctuating wildly. He told me that medical staff at Guantánamo have told him his life is in danger. And he and others want us to get the word out about this.

We, last week, CCR and group of other habeas counsel, wrote a letter to the authorities at Guantánamo and to the Department of Justice reporting what we have heard and asking for a response. And to date, almost two weeks later, we have not heard anything, other than denials of the strike.

NERMEEN SHAIKH: How is it that a Guantánamo spokesperson is saying that there are only five or six people on hunger strike?

PARDISS KEBRIAEI: That’s right. They have downplayed the scale of the strikes and have said that there are only a handful on strike and only a handful being tube-fed. It may be a matter of semantics: The way that Guantánamo authorities define people on hunger strike is largely discretionary.

But what we have heard from every habeas counsel who has been down to the base or communicated with their clients since February is the same, which is that there is a large-scale strike, men are refusing food. We’ve heard reports of people losing over 20, 30, 40 pounds. And we’re now today in day 36 or so of the strike. By day 42, 45, you start seeing things like loss of vision, loss of hearing, and eventually death. So this is—it’s an emergency situation. We view it as an emergency situation. And denials by the authorities, at this point, of the strike are dangerous and irresponsible.

AMY GOODMAN: Pardiss, can you tell us about your client, who told you about this hunger strike?

PARDISS KEBRIAEI: He is a young man from Yemen. He’s one of 89 Yemenis. They make up the largest group of men at Guantánamo. There are 166 people who remain. He and—like everyone else from Yemen, even if he were cleared to leave Guantánamo, which most of the men at Guantánamo now are cleared by the Obama administration to leave, he would be stuck there. He would remain in prison because of a continuing moratorium on all transfers to Yemen. So, he’s one of many men who has, at this point, lost a great deal of hope about when his detention at Guantánamo will ever end. He’s never been charged. He’s been held now for over 11 years.

AMY GOODMAN: For over 11 years without charge.

AMY GOODMAN: How many men are in a similar circumstance? A hundred sixty-six are there. More than half have been cleared for release, just aren’t being released.

PARDISS KEBRIAEI: There are 166 men; 86 of them have been cleared by the Obama administration to leave. That means that every government agency with a stake in Guantánamo has unanimously declared that those people do not need to continue to be held. Most of the men who are cleared are Yemeni. There are 56 Yemenis who are cleared. There’s a handful of other men who could leave but need resettlement in third countries. So that is who we’re talking about at Guantánamo. There’s a small number of people, about 34, whom the government has said it ever plans to charge. The rest are not people that the government plans to ever charge, and most, as we’ve said, have been cleared to leave.

NERMEEN SHAIKH: So can you explain, though, Pardiss, why—after so many years, why are conditions now deteriorating to such an extent that these men have decided to go on hunger strike? What’s prompted that?

PARDISS KEBRIAEI: Well, the literal trigger that we’ve heard about is searches of the men’s Qur’ans, which they view as religious desecration.

NERMEEN SHAIKH: But why now? What was happening in the last few years?

PARDISS KEBRIAEI: The motivation is unclear to us. There’s been a change in personnel at Guantánamo. That may have triggered it. This is against a broader background, we’ve heard, of regressive practices more recently. But I think what it can’t be divorced from is the fact of 11 years, 11-plus years of detention, and a sense of extreme desperation, extreme hope, men who have seen their fellow prisoners die over the past few years, men who were told by President Obama in 2009 that the prison would close within a year. So that is the context we’re talking about. And a provocation like searches of the Qur’ans is severe enough, but I think it can’t be—it’s not disconnected from the broader context at Guantánamo.

AMY GOODMAN: We’re going to go to a break and then come back to this discussion. Our guest is Pardiss Kebriaei, and she is with the Center for Constitutional Rights, represents one of the prisoners at Guantánamo. We have word that perhaps more than a hundred of them are on a hunger strike, for some of them, at this point, life-threatening. When we come back, we’re also going to talk about the case that’s before the Inter-American Commission on Human Rights and speak with the lawyer who represented attorneys—represented detainees at Guantánamo and testified at that hearing. Stay with us. 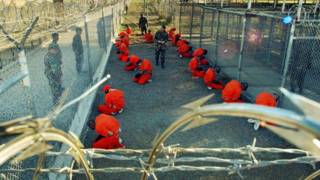 “The Terror Courts”: An Inside Look at Rough Justice, Torture at Guantánamo Bay