Gun Control: It’s Time for the Majority to Move New federal gun-control legislation has been declared all but dead on arrival this week. Gridlock in the U.S. Senate, where a super-majority of 60 votes is needed to move most legislation these days, is proving to be an insuperable barrier to any meaningful change in the wake of the Newtown, Conn., massacre. Meanwhile, the National Rifle Association is pushing its controversial agenda to place armed guards in every school, increasing the number of guns in our society and further entrenching gun culture.

While the Senate is perhaps the worst bellwether for public sentiment, recent polls indicate majority support for stricter controls, with an overwhelming 85 to 90 percent of respondents from across the political spectrum supporting universal background checks. As the horror of the Newtown massacre recedes in time, polls show that support for a more aggressive ban on assault weapons is slipping slightly, as could be predicted.

Time is on the side of those opposing gun control, most notably the NRA. The longer this drags out, the less likely anything will get done. That is why President Barack Obama’s announcement of a commission, just four days after the Sandy Hook Elementary School massacre in Newtown, was a harbinger of failure and inaction. Commissions take time. It didn’t help that the chairperson he appointed, Vice President Joe Biden, encouraged lawless, reckless gun use, saying: “If you want to protect yourself, get a double-barrel shotgun. Have the shells for a 12-gauge shotgun, and I promise you as I told my wife — we live in an area that’s wooded and somewhat secluded — I said, ‘Jill if there’s ever a problem, just walk out on the balcony here, walk out, put that double-barrel shotgun and fire two blasts outside the house. I promise you whoever’s coming in is not going.’ You don’t need an AR-15. It’s harder to aim; it’s harder to use. And in fact, you don’t need 30 rounds to protect yourself. Buy a shotgun. Buy a shotgun.”

Paul Barrett, assistant managing editor at Bloomberg Businessweek and author of “Glock: The Rise of America’s Gun,” told me: “I think he sent a pretty clear, if coded, signal in his State of the Union address when his emotional refrain was the proponents of gun control deserve a vote. He kept saying that over and over again. He didn’t really demand that members of his own party in the Senate, which his party controls, pass the legislation in question.”

Even the proposed legislation is a shadow of what genuine gun control would look like. Sen. Dianne Feinstein’s Assault Weapons Ban of 2013, by her own admission, exempts 2,271 weapons. According to a 2007 survey conducted by GunPolicy.org, of the 645 million guns worldwide in civilian hands, more than 270 million of them are in the United States — almost half of all civilian guns on the planet. The same survey reports that U.S. military and police guns combined number just over four million. We are truly a nation of guns.

While the federal legislation appears hollowed out and stalled, more progress is being made at the state level. In Colorado, a Democratic-controlled legislature narrowly passed laws requiring stricter background checks and limiting clip sizes for semiautomatic weapons. Obama traveled there on Wednesday to highlight the progress. He said, “I don’t believe weapons of war have a place in movie theaters.” Next, he heads to Connecticut, home of Newtown as well as many gun manufacturers, which is in the midst of passing the strictest gun-control laws in the country.

The moment to pass gun control was when the national attention was riveted on the massacre at Sandy Hook, the brutal slaying of 20 children and six adults. Before the broken bodies of those victims fade from memory, our broken body politic must be mended. What is needed is a vigorous grass-roots movement, to provide the leadership so lacking in Washington, D.C.

StoryJul 05, 2021“The Second”: Carol Anderson on the Racist History Behind the Constitutional Right to Bear Arms 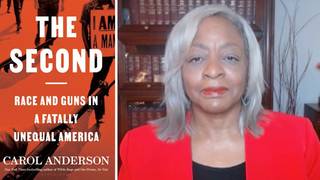 “The Second”: Carol Anderson on the Racist History Behind the Constitutional Right to Bear Arms