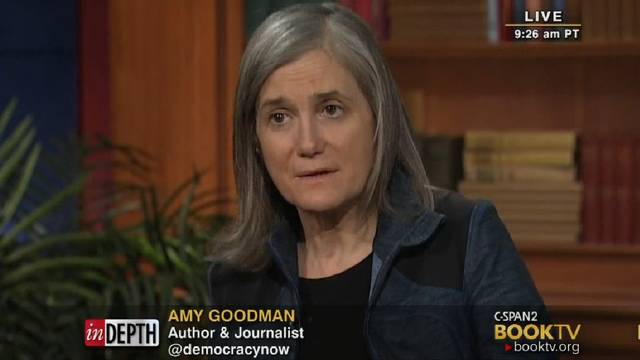 “In Depth” features a comprehensive, three-hour look at one author’s work, with questions from viewers via phone and e-mail.

Goodman is the first journalist to receive the Right Livelihood Award, widely known as the 'Alternative Nobel Prize' for “developing an innovative model of truly independent grassroots political journalism that brings to millions of people the alternative voices that are often excluded by the mainstream media.” She is the first co-recipient of the Park Center for Independent Media’s Izzy Award, named for the great muckraking journalist I.F. Stone. She also received the George Polk Award and the Robert F. Kennedy Prize for International Reporting.

During the program, she discussed the five non-fiction books she has co-authored, including: The Exception to the Rulers: Exposing Oily Politicians, War Profiteers, and the Media that Love Them; (2004); Static: Government Liars, Media Cheerleaders, and the People Who Fight Back (2006); Standing Up to the Madness: Ordinary Heroes in Extraordinary Times (2008); Breaking the Sound Barrier (2009); and The Silenced Majority: Stories of Uprisings, Occupations, Resistance, and Hope (2012).