We go to Florida, where calls are growing for the the release of Marissa Alexander, the African-American mother of three who was sentenced to 20 years in prison for firing what she maintains was a warning shot at her abusive husband. Alexander was prosecuted by Angela Corey, who also oversaw the case against George Zimmerman. Alexander insisted she was defending herself when she fired a shot into a wall near her husband, and attempted to use Florida’s “Stand Your Ground” law in her defense. But in March 2012 the jury convicted her after only 12 minutes of deliberation. A coalition of Southern community organizations are on a “Walk for Dignity” in Florida from Jacksonville — where Alexander was convicted — toward Sanford, where a memorial for Trayvon Martin is planned on Saturday. We speak with one of the march’s coordinators, Aleta Alston-Toure, who has visited Alexander in jail and is also calling for Corey to resign.

AMY GOODMAN: We turn to the growing protests around another Florida shooting case, which had a different outcome from the case of George Zimmerman. It’s Marissa Alexander, 31 years old, African-American mother of three, who was sentenced to 20 years in prison for firing what she maintains was a warning shot at her abusive husband. Alexander had turned down a plea bargain that would have seen her jailed for three years. She insisted she had been defending herself when she fired a shot into a wall near her husband, and she attempted to use Florida’s Stand Your Ground law in her defense. But in March 2012, the jury convicted her, after only 12 minutes of deliberation. She was sentenced to 20 years behind bars under a Florida law known as “10-20-Life” that carries a mandatory minimum for certain gun crimes regardless of the circumstance. The case against her was argued by Angela Corey, the same prosecutor in charge of the case against George Zimmerman.

Well, to protest her imprisonment, as well as the acquittal of George Zimmerman, a coalition of Southern community organizations has been marching in a, quote, “Walk for Dignity.” They began Monday in Jacksonville, Florida, where Alexander was convicted, and have been walking since then to Sanford, Florida, where Trayvon Martin was killed.

We’re joined now by one of the march coordinators, Aleta Alston-Toure, founder of the New Jim Crow Movement in Jacksonville, Florida. She’s been organizing on behalf of Marissa Alexander. She visited her in jail, has written to her extensively. She’s joining us by Democracy Now! video stream from Dickerson Community Center in Daytona Beach, Florida, where their march is now.

It’s great to have you with us. Explain this case, why it means so much to you, the case of Marissa Alexander, Aleta.

ALETA ALSTON-TOURE: Well, the case means so much to me because this is truly—Zimmerman got away with murder. And we’re trying to say, through the Walk for Dignity, that the shift now is from a legal crisis to a human crisis. And that’s because the decades of the prison crisis is now out of hand. It’s totally out of hand. We looked in the past at those that said, “I am a man,” and now we’re saying, “I am human.” We are trying to right now just make a statement that we’re taking action. We’re taking action by walking together as organizations, as youth, to do something together to change those things. And the two demands that we have is the resignation of Angela Corey, clearly, because she is profiting. Her career is to lock people up. She is a politician. And we clearly are saying also that we want to have the release of Marissa Alexander. And enough is enough.

AMY GOODMAN: Quotes—Aleta, the quotes are astounding. Angela Corey complained to The Washington Post of the online agitation like yours to free Marissa Alexander, saying, “I think social media is going to be the destruction of this country.” So, let me read from The Daily Beast, which says, “No, it’s not Alexander’s abusive husband Rico Gray—who said in his deposition, 'I got five baby mammas, and I [hit] every last one of them except for one'—that makes Corey see red. What really fries her bacon,” this is The Daily Beast, “is the idea that anyone questions her overzealous prosecution of a battered woman acting in self-defense.” Could you respond to this, Seema Iyer? You’re an attorney.

SEEMA IYER: Yeah, I could respond all day long to Angela Corey, and I’m sure that Aleta and both you remember Angela Corey’s statements after the Zimmerman verdict. It was tantamount to accepting an Oscar Award, and she was thanking her cast and crew.

AMY GOODMAN: And when I was watching—

SEEMA IYER: She was so glib.

AMY GOODMAN: —I was so confused. I said, “Isn’t this the woman that brought the second-degree murder charge against George Zimmerman?”

AMY GOODMAN: She sounded like she was part of the defense team.

SEEMA IYER: And that she just lost—that she just lost a case. And she was just enamored with her team, and that’s all she focused on, as opposed to the victim and the victim’s family. And what Aleta is saying is a very interesting concept, the concept of the prosecutor being a politician, or what under the law says the prosecutor’s duty is, and that is to be a minister of justice. And there are many prosecutors across this country who do ride that line. And that is, some cases need to be prosecuted, some people do need to be locked up, and some cases need to be dismissed.

AMY GOODMAN: Now, this is—but she gets 20 years in prison. She was estranged from her husband, Rico Gray, and had a restraining order against him, even though they had had a baby together just nine days before. Aleta, we only have a minute. What more would you want to say as you are on this march from Jacksonville to Sanford? Is there any word on appeal that this case will—will be thrown out, that she will be freed?

ALETA ALSTON-TOURE: Well, you know, we’re closing the gaps. We want to close the gaps of those that cause victims to be, you know, lost in the system. And to do that, we’ve really got to look at the criminalization of women. Beth Richie wrote a book called Arrested Justice. And right now we know that we’ve got to get the anti-domestic violence and the sexual violence groups to know what it is the impact of Stand Your Ground legislation means when we say, “I am human.” And we do know that this will have to have justice, and we will be able to see Marissa, because this is out of control, again, because of the decades of the prison crisis and because of this thing called slavery by another name. It’s intentional disregard of the law. It’s deliberate indifference. And that’s—

AMY GOODMAN: Aleta, I want to thank you for being with us.

ALETA ALSTON-TOURE: Thank you for having me.

Aleta Alston-Toure, founder of the New Jim Crow Movement in Jacksonville, Florida, has met with Marissa Alexander in jail, writes to her. They are ending up, the group of protesters, in Sanford tomorrow for a Trayvon memorial. Seema Iyer, thanks so much for being with us, as well. 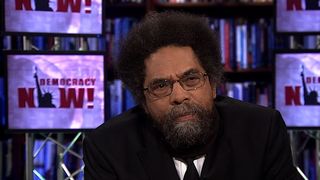