As part of today’s national commemoration of the 50th anniversary of the March on Washington, the rarely seen Oscar-nominated documentary about Dr. Martin Luther King Jr. and the civil rights movement, “King: A Filmed Record…Montgomery to Memphis,” is being screened in theaters nationwide. Largely made from original newsreel footage, the film was played at a “one time only” event on one night in 1970 at 650 theaters, but has since gone largely unseen. We air an excerpt of the film in which King delivers his famous “I Have a Dream” speech 50 years ago on August 28, 1963. And we’re joined by the film’s associate producer, Richard Kaplan. Click here to watch Part 2 of this interview and see video clips of King organizing and speaking in Montgomery and Birmingham.

NERMEEN SHAIKH: We end today’s show with an excerpt from a remarkable and rarely seen Oscar-nominated documentary about Dr. Martin Luther King Jr. and the civil rights movement. It’s called King: A Filmed Record…Montgomery to Memphis. The film was originally shown in 1970 on one night in 650 theaters. Since then it has gone largely unseen, until today, when a print of the film restored by the Library of Congress will be screened in theaters nationwide to commemorate the 50th anniversary of the March on Washington for Jobs and Freedom, where Dr. King gave his now-famous “I Have a Dream” speech 50 years ago today on August 28th, 1963.

AMY GOODMAN: Today, on this 50th anniversary of the March on Washington for Jobs and Freedom, we bring you a large excerpt of the speech that Dr. King gave on the Mall standing in front of the Lincoln Memorial. It is introduced by A. Philip Randolph, who was the major organizer of the march. But before that, we turn to Bayard Rustin. He was A. Philip Randolph’s right-hand man, one of the greatest organizers of the 20th century, who wasn’t on the program, but this is an excerpt of him reading the demands of the march.

BAYARD RUSTIN: We demand that segregation be ended in every school district in the year 1963! We demand that we have effective civil rights legislation, no compromise, no filibuster, and that it include public accommodations, decent housing, integrated education, FEPC and the right to vote. What do you say? We demand the withholding of federal funds from all programs in which discrimination exists. What do you say?

A. PHILIP RANDOLPH: At this time, I have the honor to present to you the moral leader of our nation, a great, dedicated man, a philosopher of a nonviolent system of behavior in seeking to bring about social change, for the advancement of justice and freedom and human dignity. I have the pleasure to present to you Dr. Martin Luther King Jr.

REV. DR. MARTIN LUTHER KING JR.: I am happy to join with you today in what will go down in history as the greatest demonstration for freedom in the history of our nation.

Five score years ago, a great American, in whose symbolic shadow we stand today, signed the Emancipation Proclamation. This momentous decree came as a great beacon light of hope to millions of Negro slaves who had been seared in the flames of withering injustice. It came as a joyous daybreak to end the long night of their captivity.

There will be neither rest nor tranquility in America until the Negro is granted his citizenship rights. We must forever conduct our struggle on the high plane of dignity and discipline. We must not allow our creative protest to degenerate into physical violence. Again and again, we must rise to the majestic heights of meeting physical force with soul force. The marvelous new militancy which has engulfed the Negro community must not lead us to a distrust of all white people, for many of our white brothers, as evidenced by their presence here today, have come to realize that their destiny is tied up with our destiny.

So even though we face the difficulties of today and tomorrow, I still have a dream. It is a dream deeply rooted in the American dream. I have a dream that one day this nation will rise up and live out the true meaning of its creed: “We hold these truths to be self-evident, that all men are created equal.”

I have a dream that my four little children will one day live in a nation where they will not be judged by the color of their skin but by the content of their character. I have a dream today.

I have a dream that one day, down in Alabama, with its vicious racists, with its governor having his lips dripping with the words of interposition and nullification, one day right there in Alabama little black boys and black girls will be able to join hands with little white boys and white girls as sisters and brothers. I have a dream today.

Let freedom ring. And when this happens, when we allow freedom ring, when we let it ring from every village and every hamlet, from every state and every city, we will be able to speed up that day when all of God’s children—black men and white men, Jews and Gentiles, Protestants and Catholics—will be able to join hands and sing in the words of the old Negro spiritual: “Free at last! Free at last! Thank God Almighty, we are free at last!”

NERMEEN SHAIKH: That was Dr. Martin Luther King Jr. speaking 50 years ago today from the steps of the Lincoln Memorial at the 1963 March on Washington for Jobs and Freedom. That’s a clip from the 1970 Oscar-nominated film, King: A Filmed Record…Montgomery to Memphis. Largely made from original newsreel footage, the film was played at a one-time-only event on March 24th, 1970, in 650 theaters across the country.

We welcome you to Democracy Now! I mean, this is such an historic moment, this golden anniversary of what we were just listening to, that large excerpt of Dr. King’s speech. This film of his speech, but the whole trajectory of his public life, from 1955 in Montgomery through the Birmingham campaign, up to Chicago, taking on racism in housing, ultimately Memphis, the death of Dr. King, the assassination—this film aired two years after he was assassinated, in 1970, in 650 theaters across the country? You were there?

RICHARD KAPLAN: Correct. It was an incredible event. It never had happened before or since. These 650-odd theaters, all of them were donated for the evening, and every penny that came in at the box office was used to set up the Martin Luther King Foundation. And the film, which no one knew what it would be like, we just finished two weeks prior.

RICHARD KAPLAN: Three hours long. The first cut had been 12 hours. It was the—the final release was three hours. We just said it had to be that and no longer, because we had announced the date of the showing, and the film hadn’t been locked in yet. So it was finally done, and it was done two weeks prior to the show date. And we had two laboratories working around the clock—one on the West Coast, one on the East Coast. This was a three-hour film, 35 millimeter. There was no such thing as FedEx to get these things out. We had to get them by some kind of courier service.

AMY GOODMAN: And all the theater owners had to agree to this?

RICHARD KAPLAN: All the theater owners—this was Ely Landau’s genius to get this happening this way. They all cooperated. And every penny—all the tickets was presold, or most of them. Every penny that came into the box office—

AMY GOODMAN: What was the reaction?

RICHARD KAPLAN: The reaction was incredible. In almost every place, you know, people were just over-awed, floored. Seeing in the aggregate—many of us had seen pieces of what the film showed, but to see it all in its totality was rather overwhelming. And I think that evening was quite incredible. I happened to be at a screening up in Rockland County, New York. Other places had some bomb scares, but ultimately, everything went off—went off as scheduled, and it was a tremendous success.

AMY GOODMAN: And what’s astounding about this three-hour film is the grassroots footage, black and white. No matter how much you know about the civil rights movement, to see the water cannons, to see the batons, the children being chased by dogs in Birmingham.

RICHARD KAPLAN: This is, of course, the strength of the film, to see all of this in its totality. People had seen little pieces of it, but never seen the entire arc of this movement and what they had to contend with. And how they did it nonviolently was rather incredible. People had never seen this.

AMY GOODMAN: We’re going to link to our whole hour about the film at democracynow.org. Richard Kaplan, our guest today on this 50th anniversary of the March on Washington, Richard Kaplan was associate producer with Ely Landau, the producer of the documentary, King: A Filmed Record…Montgomery to Memphis. Kaplan also made a 24-minute film called Legacy of a Dream, narrated by James Earl Jones, which is available for free to schools and will hit classrooms next month. [Editor’s note: This transcript has been edited for accuracy.] You can go to our website to see more extended clips of King: A Filmed Record in our February 25th Black History Month special.

Black, Gay and a Pacifist: Bayard Rustin Remembered For Role in March on Washington, Mentoring MLK 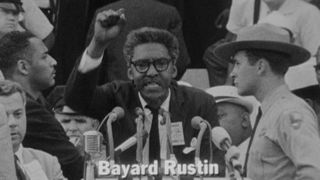 Black, Gay and a Pacifist: Bayard Rustin Remembered For Role in March on Washington, Mentoring MLK