After 75 years of federal laws prohibiting marijuana use, the Justice Department has announced it will not prevent states from legalizing the use, production, distribution and sale of recreational marijuana. The changes were prompted by marijuana legalization votes last year in Colorado and Washington state, and were announced in a memo from U.S. Deputy Attorney General James Cole, who also cited “limited prosecutorial resources” as the reason for the decision. He stressed that marijuana remains illegal under federal law, and made clear the Justice Department still expects states to regulate marijuana sales to minors, interstate trafficking, and accidents involving drivers under the influence of the drug. “There is so much cultural momentum with respect to marijuana, there is a significant shift in place that the politicians are now starting to catch up to it,” says Martin Lee, longtime investigative reporter and author of several books, including “Smoke Signals: A Social History of Marijuana — Medical, Recreational and Scientific.” He also notes that “the guidance issue made by the Department of Justice yesterday is kind of littered with caveats and red flags.”

JUAN GONZÁLEZ: After 75 years of federal laws prohibiting marijuana use, the Justice Department has announced it will not prevent states from legalizing the use, production, distribution and sale of recreational marijuana. The changes apply to 20 states and the District of Columbia. They were prompted by pot legalization votes last fall in Colorado and Washington state, and were announced in a memo from U.S. Deputy Attorney General James Cole, who also cited “limited prosecutorial resources” as the reason for the decision. He stressed that marijuana remains illegal under federal law, and made clear that the Justice Department still expects states to regulate marijuana sales to minors, interstate trafficking, and accidents involving drivers under the influence of the drug. The memo notes that, quote, “If state enforcement efforts are not sufficiently robust … the federal government may seek to challenge the regulatory structure itself.”

AMY GOODMAN: For more, we’re joined by Martin Lee, longtime investigative reporter and author of several books, including Smoke Signals: A Social History of Marijuana—Medical, Recreational, and Scientific, which was just released in paperback. He also wrote Acid Dreams: The Complete Social History of LSD: The CIA, the Sixties, and Beyond. Martin Lee is co-founder of FAIR, the national media watch group.

Welcome back to Democracy Now!, Martin. Talk about the significance of what the Justice Department has just announced.

MARTIN LEE: Well, it could be very significant, but I’m also reminded of a statement by John Mitchell back in the Nixon presidency days, when he said, “Watch what we do, not what we say.” The Obama administration has said some positive things in the past with respect to medical marijuana laws, but they haven’t followed it up in action. But this could be a game changer in that there is so much cultural momentum with respect to marijuana. There is a significant shift in place, that the politicians are now—though they’ve been lagging, are starting to catch up to it.

How this plays out in the future remains to be seen. But I think the statement—the guidance issued by the Department of Justice yesterday is kind of littered with caveats and red flags. The notion that the prosecutors will still be encouraged to take action with respect to marijuana sales to minors, for example, or diversion from states where it is grown legally now—Washington and Colorado—to other states, this could be a problem, because this will continue. I mean, people in the United States—the average age of turning onto marijuana is just below 15 years old. That will continue regardless of what the laws say. Diversion to other states is bound to continue, irrespective of the laws or the Justice Department’s policy. So at any time in the future, a future administration can lower the boom on this.

JUAN GONZÁLEZ: Well, earlier this month, one of the nation’s most prominent doctors announced that he has shifted his stance in support of medical marijuana. Dr. Sanjay Gupta, chief medical correspondent for CNN, openly apologized for his past reporting dismissing the medical uses of the drug.

DR. SANJAY GUPTA: I have apologized for some of the earlier reporting, because I think, you know, we’ve been terribly and systematically misled in this country for some time. And I—I was—I did part of that misleading. I didn’t look far enough. I didn’t look deep enough. I didn’t look at labs in other countries that are doing some incredible research. I didn’t listen to the chorus of patients who said, “Not only does marijuana work for me, it’s the only thing that works for me.” I took the DEA at their word when they said it is a Schedule I substance and has no medical applications. There was no scientific basis for them to say that.

MARTIN LEE: Well, marijuana prohibition is built on a mountain of lies. The Sanjay Gupta report on CNN a couple of weeks ago was quite significant. He focused in particular on a strain of marijuana that’s not actually psychoactive, that doesn’t get you high, and it underscores how in a lot of ways the public has been misled and it doesn’t know a lot about what the potential are medically. The program—the segment before on Democracy Now! focused on traumatic brain injuries. Well, marijuana compounds have neuroprotective properties that have been scientifically documented.

So we’re in kind of a contradictory transition period with respect to marijuana. The official federal line remains that marijuana is a substance that’s dangerous and has no medical value, and that is tantamount to saying the moon is made of green cheese. You know, that’s the policy coming from on high. So, unfortunately, even on the Gupta show, there were myths that were promoted, carryover from the drug war, the myths about marijuana being dangerous to youth with respect to lowering IQs and so forth. There’s no scientific basis for this.

So it’s still going to be a debate that’s ongoing in the culture. But when you have a celebrity like Sanjay Gupta changing his mind and apologizing, it does carry weight. But he, again, is trailing behind the public. Eighty percent of the public is pro-choice with respect to medical marijuana, that there should be the choice, if the doctor recommends it, that people can avail themselves of that choice.

So, you know, what took him so long, on the one hand? But I appreciate the fact that he’s intellectually honest enough—

AMY GOODMAN: Martin, I want to—

AMY GOODMAN: I want to read from a statement issued by the group Marijuana Majority, Thursday. Its chair, Tom Angell, said the DOJ’s announcement, quote, “represents a step in a right direction and a recognition by the administration that the politics of marijuana are rapidly shifting in favor of those who support legalization. However, my optimism is tempered by the fact that despite the Justice Department’s 2009 announcement that it shouldn’t be a priority to bust medical marijuana providers operating in accordance with state law, this administration went on to close down more state-legal marijuana businesses in one term than the Bush administration did in two terms.” Again, that’s a quote. Your response, Martin Lee?

MARTIN LEE: Again, coming back to the Mitchell comment, “Watch what we do, not what we say.” And the Obama administration has said things in the past but has not followed through. But, you know, they’re in a difficult position. In the point of view of political elites, marijuana prohibition has been a very effective instrument of social control for many years. But it seems to maybe have outlived its usefulness, and it’s not as cost-effective anymore—not in terms of dollars and cents, but just in terms of credibility.

It loses credibility when it says things about marijuana that is obviously untrue, and people can experience that when they try the drug. Or if you’re a Christian conservative going to church and you hear from your Republican neighbors how a child in their family was helped by a marijuana cookie for their violent ADD or ADHD, when nothing else helped, you know, that really means something. You have a direct experience of a different reality from what the government says. So that kind of cognitive dissonance that the marijuana laws engender are problematic from the point of view of social control. But, you know, when we talk about marijuana, it’s not a frivolous issue.

MARTIN LEE: I think one important thing to remember, that the movement to end prohibition started out as part of a broad-based social justice movement in the 1960s and was not a single issue, and we shouldn’t see it as a single issue now.

AMY GOODMAN: Martin Lee, we want to thank you for being with us, longtime investigative reporter, author of several books, including Smoke Signals: A Social History of Marijuana—Medical, Recreational, and Scientific.

And that does it for our show. Our Labor Day special, we’ll bring you Questlove, Ahmir Thompson of The Roots. Tune in to that hour special. 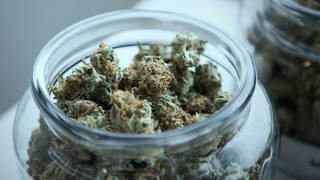