United Students Against Sweatshop have filed a suit against Washington, D.C., seeking an injunction to stop police from spying on the group’s activities. The lawsuit claims a police officer named Nicole Rizzi infiltrated anti-sweatshop protests after the devastating factory fire in Bangladesh that killed more than 1,100 workers in April. Activists say they were able to uncover Rizzi’s identity because she left several clues on social media sites. In a photo posted on the site YFrog, Rizzi points out a typo on a piece of mail addressed to the “DC Metropolation Police Department.” Rizzi’s finger partially covers up the address line, but it appears to identify her as director of the Intelligence Branch. In a post on Rizzi’s since-deleted Tumblr account, she wrote, “In the position I’m in, it’s beneficial to wear ordinary clothes. Plainclothes assignments too, you wear what would blend in.” We speak to reporter Mike Elk of In These Times magazine. He is author of the article, “Activists Identify DC Cop Who Infiltrated Bangladesh Sweatshop Protests.”

Elk writes that D.C. activists had long suspected police routinely infiltrated and spied on their protests, but until now were unable to conclusively identify any specific undercover police officer. After months of gathering evidence, attorneys Jeffrey Light and Sean Canavan worked with United Students Against Sweatshops, or USAS, to confirm the true identity of a Metro police officer named Nicole Rizzi, who had posed as a protester named “Missy.” At one point, the police officer pretended to participate in a USAS protest against companies doing business in Bangladesh — companies that refused to sign the Accord on Fire and Building Safety following the death of over 1,100 Bangladeshi garment workers in the Rana Plaza factory collapse in April.

Well, on Monday, USAS filed suit against the District of Columbia seeking an injunction to stop police from spying on the group’s activities. Activists were able to uncover Nicole Rizzi’s identity, because she left several clues on social media sites. In a photo posted on the site YFrog, Officer Rizzi points out a typo on a piece of mail addressed to the “DC Metropolation Police Department.” Rizzi’s finger partially covers up the address line, but it appears to identify her as director of the Intelligence Branch. On her now-deleted Twitter account, Rizzi tweeted, “They used to call me No Sweat Nico because no matter how hot it was at academy, I never sweat.” And in a post on Rizzi’s since-deleted Tumblr account, she wrote, quote, “In the position I’m in, it’s beneficial to wear ordinary clothes. Plainclothes assignments too, you wear what would blend in.”

Well, for more on this story, we’re joined in Washington, D.C., by reporter Mike Elk, who broke the piece in In These Times.

Welcome back to Democracy Now!, Mike. Explain how they identified this officer and what the significance of this means.

MIKE ELK: Well, I think in some ways it’s a testament to what a small town D.C. is that they were able to identify this woman. Basically, an activist had been very suspect of this woman for a number of years, seen her in a lot of meetings, at nearly every protest, but nobody seemed to know her, and she acted strange. Then, on time, I guess this activist, Lacy MacAuley, was at a bar, and somebody showed a Twitter account of this woman, and right away Lacy knew who it was, knew that this woman was Missy, and then, after scrolling through the account, began to discover this woman’s name was actually Nicole and that she was a cop, based on her describing the day-to-day routine. Then, after a matter of time, Sean Canavan and Jeffrey Light did a lot of pretty obsessive Facebook stalking and other social media stocking and found that this woman, despite being an undercover cop, could not stop talking about being a cop on Twitter and Facebook, etc., etc. And so, eventually, they were walking one day, Jeffrey Light was, and outside of a protest at Children’s Place, which refuses to sign the fire and safety accord for Bangladesh, and he spotted her, and they observed her at several other protests. So that’s how they were able to find this, and it’s some real crack work by some activists here.

AMY GOODMAN: And so, explain what USAS, United Students Against Sweatshops, are doing.

MIKE ELK: So right now United Students Against Sweatshops is putting pressure on retailers like Gap, Children’s Place, Wal-Mart, Target, to sign the Bangladesh accord on fire and safety. This would be an accord that would set up a third-party organization to monitor safety conditions in Bangladesh, as well as allow binding arbitration by Bangladeshi courts if terms of this agreement are violated.

AMY GOODMAN: And what they’re doing about the infiltration by this D.C. officer?

MIKE ELK: So, under D.C. law passed in 2004, an officer can’t be used undercover unless there is approval from a designated person within the police department. An audit by the D.C. government last year showed that in 17 cases over a five-year period in which police officers were used undercover, that not one of them had approval from this person. So right now the lawyers are suing to get an injunction to stop the spying on United Students Against Sweatshops.

AMY GOODMAN: I see you also write that this Missy, Nicole Rizzi, the undercover cop, was at an anti-Keystone pipeline protest, as well, at the Canadian embassy on March 21st.

MIKE ELK: As well as at a World Bank protest, and people claim that they’ve spotted her at other events over the years. And quite a few people have spoken about her.

AMY GOODMAN: What does this infiltration mean for protests? What kind of effect do you think it has? Does it make people afraid to get involved? And does it make people then suspicious of each other, like “Who’s infiltrating? Who is really here because they’re deeply concerned about an issue?”

MIKE ELK: Yeah, I mean, certainly, you know, organizing is about folks coming together that don’t know each other to fight for something collectively. Now, if you’re an organizer or an activist, and a stranger, a well-intentioned stranger, comes up to you and wants to get involved and you don’t know them, are you going to be suspect that this person is a cop who might spy on you and disrupt your protest? I think it really builds distrust among strangers that, in an increasingly difficult time, need to come together and organize. So I think it’s a real problem.

AMY GOODMAN: You have written a great deal about Bangladesh labor abuses and their connection to U.S. multinational corporations. Talk about what is the latest now and why people would be outside Children’s Place, one clothing store, and other places like this.

It appears, from the reporting of reporters like Banglashi reporter Emran Hossain and others, that things are going back to normal in Bangladesh. In fact, in some ways, labor law is getting worse in Bangladesh. Hospital workers and nonprofit workers got the right to join a union taken away in Bangladesh. Workers in export processing zones still don’t have the right to unionize. Reporting by people like Jim Yardley of The New York Times shows that the building inspectors are still doing the same kind of corrupt things they used to do in the past. So it appears that business is going back to normal.

AMY GOODMAN: Finally, Mike Elk, we just have 10 seconds, but does anything happen when an undercover officer who’s posing as a protester actually gets outed, like in the case of Nicole Rizzi?

MIKE ELK: She may get fired. It’s unclear. The D.C. police haven’t really spoken about it yet.

AMY GOODMAN: Why would she get fired? I mean, she’s not doing this on her own.

MIKE ELK: Well, I mean, I think when somebody does something as sloppy as be an undercover cop and talk about it all over social media, that’s kind of a screw-up.

AMY GOODMAN: Mike Elk, I want to thank you for being with us, labor reporter for In These Times.

MIKE ELK: Thanks for having me on.

As Bangladesh Toll Hits 400, Calls Grow to Grant Workers the Same Protections as Labels They Make 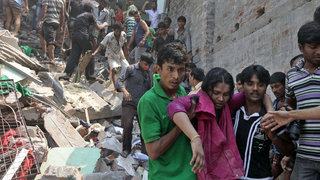 As Bangladesh Toll Hits 400, Calls Grow to Grant Workers the Same Protections as Labels They Make