The New York Times has revealed the Drug Enforcement Administration has an even more extensive collection of U.S. phone records than the National Security Agency. Under a secretive DEA program called the Hemisphere Project, the agency has access to records of every phone call transmitted via AT&T’s infrastructure dating back to 1987. That period covers an even longer stretch of time than the NSA’s collection of phone records, which started under President George W. Bush. Each day, some four billion call records are swept into the database, which is stored by AT&T. The U.S. government then pays for AT&T employees to station themselves inside DEA units, where they can quickly hand over records after agents obtain an administrative subpoena. The DEA says the collection allows it to catch drug dealers who frequently switch phones, but civil liberties advocates say it raises major privacy concerns. We speak with Scott Shane, national security reporter for The New York Times and co-author of the report, “Drug Agents Use Vast Phone Trove, Eclipsing NSA’s.”

AMY GOODMAN: In a moment we’ll be talking about the death of David Frost with the director Ron Howard, but first we turn to news that one government agency has an even more extensive collection of U.S. phone records than the National Security Administration, the NSA. That agency is the Drug Enforcement Administration. In a front-page article, The New York Times has revealed a secretive operation inside the DEA called the Hemisphere Project. Under this program, the DEA has access to records of every phone call over AT&T’s network dating back to 1987. That period covers a longer stretch of time than the NSA’s collection of phone records, which began under President George W. Bush. Some four billion call records are gathered to the DEA’s database every day. It’s unclear if other major phone companies are involved.

Unlike with the NSA, the DEA’s phone records are actually stored by AT&T. The U.S. government then pays for AT&T employees to station themselves inside DEA units, where they can quickly hand over data after agents obtain an administrative subpoena. The U.S. government says the program allows DEA agents to keep up with those in the drug trade who often switch phones. In a statement, Justice Department spokesperson Brian Fallon said that “subpoenaing drug dealers’ phone records is a bread-and-butter tactic in the course of criminal investigations” and that Hemisphere “simply streamlines the process.”

The disclosure of the DEA’s Hemisphere program follows another major revelation involving the DEA and government surveillance. It was revealed last month a secretive DEA unit has used information taken from NSA wiretaps for cases unrelated to terrorism. The DEA has also provided classified intelligence obtained by the NSA and other sources to the Internal Revenue Service to help in their investigations of Americans.

Welcome to Democracy Now!, Scott Shane. Explain exactly how it’s done and how you found out about this.

SCOTT SHANE: Well, as you mentioned, I wrote this article with Colin Moynihan, a colleague at The New York Times, and he received from an activist in Washington state, named Drew Hendricks, a 27-slide PowerPoint, which was prepared by AT&T and government agents, apparently DEA or possibly other government agencies, and essentially they’re training slides to introduce folks who are going to be working on the Hemisphere Project, how it works and what it can do. And Drew Hendricks, the activist in Washington, got these slides as part of a series of public information requests. He’s sort of a peace activist out there, and he had been helping some folks with a lawsuit and just, you know, fired off a bunch of public information requests to police agencies in Washington state and other places on the West Coast. This set of slides came back with one of those requests.

Drew Hendricks believes it may have been sent actually by accident, included by accident. And so—but, in fact, it’s unclassified. It’s marked “Law enforcement sensitive,” but it’s unclassified, and it actually states that the Hemisphere Project is unclassified. What’s kind of remarkable to us is that this has been going on for at least six years under the name Hemisphere Project, and it’s unclassified, but no one has ever learned about it. I couldn’t find a single reference to it in the Nexis database or on the web. And so, they’ve kept it very well hidden, and indeed some of the slides say, if you get information from Hemisphere, never reveal the source of the information. So, the government has kept this very, very well hidden, along with AT&T.

AMY GOODMAN: And explain what exactly it is, what AT&T is keeping records of and how the government uses this information.

SCOTT SHANE: AT&T operates what are called switches, through which telephone calls travel all around the country. And what AT&T does in this program is it collects all the—what are called the CDRs, the call data records, the so-called metadata from the calls that we’ve heard about in the NSA context. This is the phone number—phone numbers involved in a call, its time, its duration, and in this case it’s also the location. Some are cellphone calls; some are land line calls. Anything that travels through an AT&T switch, even if it’s not made by an AT&T customer—for example, if you’re using your T-Mobile cellphone but your call travels through an AT&T switch somewhere in the country, it will be picked up by this project and dumped into this database. So AT&T collects the information on all these calls, basically who called who when all over the country. And as you mentioned, there is a slide that says four billion—with a B—call data records are added to the database every day. I’m told by some technical experts that it’s possible one call can create more than one call data record. Apparently, if a cellphone, for example, in a moving car switches from one tower to another, that could be another record, so—because those numbers sound pretty high, 12—you know, maybe 12 or so calls per American per day.

But anyway, all that call data goes into this giant database, and then when a drug agent at one of three centers around the country—in Los Angeles, Houston and Atlanta—finds a number of interest, they can ask the AT&T person sitting next to them, “Check this out.” The AT&T person accesses the database, the Hemisphere database, and they can come back with a record of, you know, “Here’s the other numbers called by this number, the number you’re interested in,” and when and where, in many cases, and then they can follow up.

I should say that in order to access the database, the government says that the agent asking AT&T to make the search has to produce at least what’s called an administrative subpoena, which is essentially a form, a DEA form, not approved by a court or by a judge, but simply a DEA form saying, you know, here’s why we’re interested in this number. So there’s no judicial oversight, but it is—these administrative subpoenas are used routinely in a criminal investigation. So the government’s side of the story is that this is no different from kind of routine criminal investigation that happens every day.

AMY GOODMAN: Scott Shane, very quickly, my final question is about the issue of privacy. What does this raise for Americans?

SCOTT SHANE: Well, I think what it shows is that, apart from the program we’ve learned about with the NSA in recent months, there are many other programs that the government has, many of them related to law enforcement as well as to intelligence gathering, and also that the government works extremely closely with some telecommunications and Internet companies, sometimes using court orders but often using voluntary arrangements like this one, and often paying the companies to participate, so that the universe of data that’s gathered and has implications for American privacy goes way beyond any one agency or even beyond the government itself into the corporate sector.

AMY GOODMAN: Scott Shane, I want to thank you for being with us, national security reporter for The New York Times. We’ll link to your front-page article yesterday, “Drug Agents Use Vast Phone Trove, Eclipsing N.S.A.’s.” 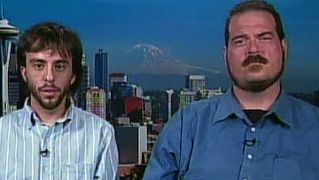