European Privacy in the Age of Snowden: We Need a Debate About What Intelligence Agencies Are Doing

As the movie “Citizenfour” about National Security Agency whistleblower Edward Snowden opens in theaters in the United States, we look at the impact his leaks have had on the debate over online privacy in Europe. The Austrian newspaper Der Standard reports the NSA has accessed nearly 70 percent of telecommunications in Vienna, home to thousands of diplomats from around the world. Earlier this year, Germany ordered the removal of a top U.S. intelligence official in the country after leaks from Snowden showed the United States was monitoring the communications of millions of Germans and tapping Chancellor Angela Merkel’s cellphone. In a victory for digital privacy, the European Court of Justice struck down a rule that required telecommunication companies to store the communications data of European Union citizens for up to two years. The ruling happened on the same day Snowden addressed the Parliamentary Assembly of the Council of Europe from Moscow. We are joined by Andreas Krisch, president of European Digital Rights.

AMY GOODMAN: We’re on the road in Vienna, Austria, broadcasting from the studios of Okto TV. That’s Okto Community Television. As the movie Citizenfour about National Security Agency whistleblower Edward Snowden opens in theaters today in the United States, we look at the impact of Snowden’s leaks on the debate over online privacy here in Europe.

The Austrian newspaper Der Standard reports that Vienna, which has a Cold War reputation as the spying capital of the world, may now be home to a major surveillance operation by the NSA. The paper cites documents released by Snowden that suggest the NSA tapped networks run by the company Telecom Austria and the University of Vienna in order to access nearly 70 percent of telecommunications in the Austrian capital, which is home to thousands of diplomats from around the world. Earlier this year, Germany ordered the [removal of a] top U.S. intelligence official in the country after leaks from Snowden showed the United States was monitoring the communications of millions of Germans and tapping Chancellor Angela Merkel’s cellphone. The German government also ended its contract with Verizon for cooperating with the NSA in spying on Germans.

Meanwhile, in a victory for digital privacy, in April, the European Court of Justice struck down a rule that required telecommunication companies to store the communications data of European Union citizens for up to two years. The ruling happened on the same day Edward Snowden addressed the Parliamentary Assembly of the Council of Europe via video link from Russia. This is a clip.

AMY GOODMAN: That’s Edward Snowden addressing the European Court of Justice in April—on the same day a court struck down a rule requiring telecommunication companies to store the communications data of European Union citizens for up to two years.

ANDREAS KRISCH: Well, we live in a world of mass surveillance. We have to understand that every piece of communication that we do—is it online, is it via telephone or whatever—is going to be stored and analyzed by somebody. It is, on the one hand, the U.S., the NSA, but also European intelligence agencies like the GCHQ in U.K. or the German BND and a lot of others. And this is something that we need to stop. This is something that we need to work to re-establish our fundamental rights to privacy and for secret communication. And the court case in Luxembourg on mandatory data retention of telecommunication data was one of the big victories we had recently on this quest.

AMY GOODMAN: What was that victory? And explain for laypeople, who may not even—who have trouble even, you know, on a computer or haven’t been on a computer.

ANDREAS KRISCH: —that person A is communicating with person B, and how long this lasts and so on. And this information, this metadata, had to be stored for up to two years, between six months and two years. And we fought that from the very beginning and have been quite unsuccessful for some years. But finally, when it was introduced in Austria, because every member state of the European Union has to transfer—to implement this piece of legislation into their own jurisdiction, and when this was done in Austria, we started a constitution court case on that. And together with 11,138 others, we made a complaint, and this was referred to the European Court of Justice, who then ruled that this is in violation of our fundamental rights that are enshrined in the Charter of Fundamental Rights of the European Union, therefore the European piece of legislation was annulled. This is the first time in history that a European legislation was annulled entirely and not only in pieces. And following that, also the Austrian Constitutional Court ruled that the Austrian implementation of this law is invalid and is also in violation of fundamental rights of Austrian citizens.

AMY GOODMAN: Can you talk about the significance of Edward Snowden’s revelations and how they’ve impacted this debate? In the United States, President Obama has said—you know, well, of course, Edward Snowden has been charged and wanted in the United States to face charges, but he has said this discussion would be happening without Snowden. Is that true?

ANDREAS KRISCH: Well, I think that the main thing that Edward Snowden did to the world is to provide evidence on things that we were suspicious about previously that they might happen, and now we do know it. We do have the facts from the documents from the NSA, from the GCHQ and other organizations, and therefore we know what we are talking about, that every piece of communication is being monitored. And this is the thing that needs to be addressed, and I think there is no other way than to have a democratic debate about how much of surveillance we are able and willing to accept in our societies and how far we can do such things in democracies, because it goes to the heart of democracy, if you are no longer able to communicate freely to say what you think and do that without having the fear of being monitored and having this being held against you. And I think this is the important discussion that we need to lead, and this was started by Edward Snowden, and this is a huge thing that he did to the world and to the society, I think.

AMY GOODMAN: And can you talk about the documents that were released around what’s happened here, the Austrian newspaper Der Standard reporting that Vienna, who has the reputation of being the spy capital of the world, may now be home to a major surveillance operation by the NSA, talking about tapping networks run by the company Telecom Austria and the University of Vienna, accessing what, some 70 percent of telecommunications in the Austrian capital?

ANDREAS KRISCH: Well, there is no fixed proof of that, as far as I know, but we do have the suspicion, and it is clear from the NSA documents that Austria plays a major role in this network of surveillance. Austria is named the [inaudible] partner of the U.S. in these operations, and so we do know that there is something going on. And I think the main question is: What is the role of Austrian companies in this, and also what is the role of U.S. companies in this? Because networks are not only provided by Austrian companies, but there are also companies from third countries involved in networking, and so we need to see what their role is and if there is maybe a leak.

AMY GOODMAN: What message do you have, as president of European Digital Rights, to people in the United States around this debate?

ANDREAS KRISCH: I think what we need to do globally—in the U.S. and in Europe and elsewhere—is to stand up for our rights, our rights to privacy, our fundamental rights of freedom of communication, freedom of expression. And I think that we need an informed debate about what intelligence agencies are doing now and where the limits to their activities are. And we need to be very clear about that. And as far as the relation between the European Union and the U.S. is concerned, I think that we first need to agree that fundamental rights, as they are recognized in the European Union in the Charter of Fundamental Rights of the European Union, need to be accepted and agreed on by the U.S. before we can talk about any exchange of data and about any replacements or improvements of the Safe Harbor agreement that covers data protection in data transfers between the EU and U.S. So, there is a lot of work ahead, and there is really a massive problem with trust in the relationships now.

AMY GOODMAN: Andreas Krisch, I want to thank you for being with us, president of European Digital Rights, obviously a discussion we will continue. 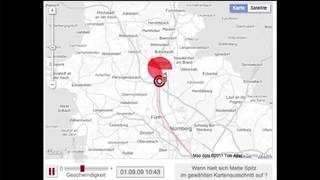