Broadcasting from Trinity University, we speak with Graciela Sánchez, director of the Esperanza Peace and Justice Center, which is going on its 28th year as a community gathering space in San Antonio, Texas. The center recently hosted an exhibit on fracking, “Frack-aso! Portraits of Extraction in Eagle Ford and Beyond.” The Eagle Ford Shale is the site of a massive fracking project in the local area — the flares burning off excess natural gas can be seen by satellite at night. Sánchez also talks about grassroots efforts to demilitarize their community.

AMY GOODMAN: This is Democracy Now!, democracynow.org, The War and Peace Report. I’m Amy Goodman. We are broadcasting from San Antonio, Texas, from the studios of TigerTV at Trinity University, with an entire student crew, which we thank profusely. We end today’s show with Graciela Sánchez, director of the Esperanza Peace and Justice Center, which is going on its 28th year of being a community gathering space here in San Antonio. They recently hosted an exhibit on fracking called—you’ll tell me what it’s called, Graciela.

AMY GOODMAN: “Frack-aso!: Portraits of Extraction in Eagle Ford and Beyond,” that included a series of workshops with Idle No More. The Eagle Ford Shale is a massive fracking project, and the flares burning off excess natural gas can be seen by satellite at night. Graciela Sánchez joins us to talk about these and other developments here in San Antonio.

It’s great to be with you. Tell us about Esperanza, which means “hope.”

GRACIELA SÁNCHEZ: Esperanza was created, again, 28—27 years ago. We’ll get to that place of 28 in January. But it was our desire for some of these women of color, who had gone away to school and come back and said, “We want to live here in San Antonio, and we want to make sure that our lives are lived for peace and justice.” We live in a city that’s a military town, and we’ve been colonized for over 300 years, with five military stations, called the “missions,” back in the 1700s and five military—

AMY GOODMAN: We went to the Alamo last night.

GRACIELA SÁNCHEZ: Right, and then five military stations in the 20th century. And even though the rest of the country has demilitarized, San Antonio hasn’t. We’ve continued to grow in different ways. So we wanted to work for a culture of peace and justice rather than violence and war.

AMY GOODMAN: What does fracking have to do with this?

GRACIELA SÁNCHEZ: Well, again, it’s the violence for our Mother Earth, Nuestra Tierra, our land, our water and our air quality. And for our local leaders, it’s always about jobs, jobs, jobs. And they are not caring at all about how it’s really affecting the people who live in that community. And that means South Texas or the Panhandle area or—

AMY GOODMAN: Explain what Eagle Ford is and the fracking that’s happening.

GRACIELA SÁNCHEZ: It’s an area that has shale. And, you know, again, you’ve got all these machines that come in and drill down into the earth. And the way they drill the shale that they need for this natural gas is through pumping water into—you know, into the land and extracting.

GRACIELA SÁNCHEZ: And it’s already happening. And there’s a major growth in that community. So, smaller rural communities, like Karnes County, that have no form of other development, are just demanding these jobs here. But it’s affecting the quality of life.

AMY GOODMAN: In fact, isn’t this Dilley detention center that is being built, the 2,400-bed facility, an old workers’ camp for people who were fracking?

GRACIELA SÁNCHEZ: Right, exactly. So, again, they’re going to take the jobs however they come. It doesn’t matter if it’s hurting the community there, if it’s hurting immigrant communities.

AMY GOODMAN: What does “Frack-aso” mean?

GRACIELA SÁNCHEZ: “Frack-aso” means—it’s a play on words. And I actually kind of came up with it, but it’s like everything’s broken and falling apart, and it’s extreme. And so, we wanted to pull together community voices to portray fracking. We did oral histories of people in South Texas. Right now, just south of San Antonio, we have Calumet, and it’s a refinery. And in the last five or six months, we’ve seen those flares, but there have been fuel spillage. Last week there was a fire in Calumet. And none of the residents, right here in San Antonio, were made aware of the fire or the spillage. And this is—the spill went down to the San Antonio River. And this is a river that has just been fixed up, a lot of development in the south part of the river. And people have been playing in that river. People have been fishing in this river. And they’re not even being told how Calumet is destroying that neighborhood.

AMY GOODMAN: Well, Graciela, I want to thank you for being with us. We were showing images of the Esperanza center during the break, and people can go to our website at democracynow.org. Esperanza center going into its 28th year as a community gathering space. Graciela Sánchez, thanks so much.

AMY GOODMAN: On Thursday, I’ll be speaking at University of Michigan-Flint, Women’s Educational Center at 6:00 p.m. Then on Friday, I’ll be in Santa Fe, New Mexico, at the Lensic Performing Arts Center at 7:00 p.m. You can check our website at democracynow.org for more details. Special thanks to Renée Feltz, Deena Guzder, Denis Moynihan and the whole crew here at TigerTV. 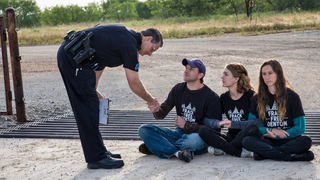