Terror at the Top of the World: Is Climate Change Leading to More Attacks by Polar Bears in Arctic?

We look at a new investigation by the Pulitzer Prize-winning website, InsideClimate News, titled “Meltdown: Terror at the Top of the World.” It tells the story of seven American hikers who went on a wilderness adventure into polar bear country in Canada’s Arctic tundra — and faced a harrowing attack. But despite taking proper steps to protect themselves, a polar bear came to their camp in the middle of the night and pulled one of the hikers out of his tent. Scientists say that climate change is greatly impacting polar bear habitat, which may be the cause of increased polar bear attacks on humans. We speak to Rich Gross, a Sierra Club guide on the trip, and Sabrina Shankman, a reporter with InsideClimate News and author of the new ebook.

JUAN GONZÁLEZ: We continue to look at climate change as we turn to a new investigation by the Pulitzer Prize-winning website InsideClimate News. It’s called “Meltdown: Terror at the Top of the World.” It tells the story of seven American hikers who went on a wilderness adventure into polar bear country in Canada’s Arctic tundra and faced a harrowing attack. The trip was led by two Sierra Club guides, including Rich Gross, who will join us in a minute. But despite taking proper steps to protect themselves, a polar bear came to their camp in the middle of the night and pulled one of the hikers out of his tent. In this clip from a documentary with the report, Matt Dyer [describes] what happened after the bear clenched his head in his mouth and dragged him into the forest.

MATT DYER: I had a broken jaw. I had a collapsed lung. I had cracked vertebrae in my neck, broken neck, but it didn’t get into the spinal column. This hand was just kind of crunched, so he broke some of these bones. And his bottom jaw kind of dug in here, and his top one was over in here, and he kind of had me like that. And I can remember, looking out, I could see his belly and leg and everything. He didn’t take his claws to me, which is good. So I think all the injuries I got were bites. He was just trying to get me out of that tent with his mouth, probably trying to hold the tent down with his hands. I don’t know.

AMY GOODMAN: That’s a clip from the Vice documentary that’s being published in three parts next week, along with the new ebook, Meltdown: Terror at the Top of the World, by Sabrina Shankman, who joins us now, a reporter for InsideClimate News. And in San Francisco, we’re joined by Rich Gross, the Sierra Club guide since 1990, one of the two on the Arctic trip documented by Shankman.

We welcome you both to Democracy Now! Rich, take it from there—I mean, you were there—and describe what further happened.

RICH GROSS: Sure. So we had gone to the Torngat Mountains, and in part to see bears, in part to see a remote area in the Arctic. And we had been—it was the third day on the trip. We had seen a mother and cub before that and seen a large male bear before that, as well. And it was our third night in the Torngats. I woke up to hear Matt screaming, “Help me! Help me!” I tore out of my tent, grabbed a flare gun, which was one of the pieces of protection we had brought with us. And when I got out of the tent, I saw Matt being dragged away from our camp. Our camp was surrounded by an electric fence. The bear had torn through the fence and was dragging Matt by his head away from camp. I took out the flare gun, shot at the bear. The bear dropped Matt, started running away. The bear ran about 50 yards and started coming back for Matt. We thought Matt was dead at that point. I then shot at the bear again, and the bear ran away. We then went out and got Matt, found that he was not dead, thankfully, and carried him back into camp, started arranging for his evacuation and then, later on, our evacuation, and started treating Matt, as well.

JUAN GONZÁLEZ: And the rest of the night there, I imagine you must have been up all night fearing the possibility of a bear coming back.

RICH GROSS: We were. So that was the fourth bear we had seen. The large bear we saw the day before, we had had to scare away with a flare gun, as well. So we had been left with—we started out with eight cartridges. They’re 12-gauge flare guns, flare cartridges. We had at that point used three of them. And we knew that we—you know, we didn’t know that that bear wasn’t coming back or that some other bear wasn’t coming back. So, we were—it was a long night, waiting. You know, at least when it turned light, we could see a bear coming. And that was the scariest part. And we weren’t sure how long it would take to get Matt evacuated or to get our own evacuation arranged.

AMY GOODMAN: Sabrina Shankman, you’re with the Pulitzer Prize-winning news website, InsideClimate News. You’ve turned this story into a book. Talk about what this attack means for climate change.

SABRINA SHANKMAN: Sure. You know, when we first heard about this attack, it was interesting because it’s on par with almost what’s expected. So, you can’t ever say that a specific polar bear attack is related to climate change, because you can’t get inside the head of a polar bear. But what we do know is that biologists have been predicting for a couple of years now that as the sea ice continues to disappear, the habitat from which polar bears hunt, there’s going to be an increase in these kind of human and polar bear interactions. And so, that’s exactly what you’ve seen. You know, Matt’s attack was horrific, but it’s one of a number that have happened. You know, you’re looking at—we’re on course for about 35 attacks this decade, according to one of the researchers I spoke with. In the past, back in the '60s and ’70s, you're talking about 10 per decade. So, exactly what the biologists have said is going to happen as climate change progresses is what we’re seeing.

AMY GOODMAN: Is it more people are going there?

SABRINA SHANKMAN: That’s—you know, so there is this question: Is it that there are more people going there? Possibly. It could also be that, you know, polar bears are traveling further inland. So you have these Inuit communities, especially around the Hudson Bay, where the bears are traveling further and further inland, and you’ve got people being attacked in the middle of these main streets. I mean, last year in Churchill, there were two people, about a month apart, who were walking home on a main street, you know, late at night or early in the morning, around 5:00 in the morning, and they were attacked not by a mugger, but by a polar bear.

JUAN GONZÁLEZ: And, Rich Gross, you’ve been a Sierra Club guide since 1990. Could you talk about the change in the terrain that you’ve witnessed over these years?

RICH GROSS: Sure. I mean, it’s a slow change, and so you can’t—you know, and we go to different places, different remote places throughout the Arctic. And so, you know, I don’t think we’ve seen particular change over years, because we don’t go back to the same places. But you can—you know, whenever you talk to native people, they will talk about the change in both hunting and in the animals’ behavior. And I think the Torngats and the polar bears are just an example of that.

AMY GOODMAN: And, Sabrina, how it starts lower down from the polar bear, the melting sea ice, what does this have to do with polar bear attacks?

SABRINA SHANKMAN: Yeah. So, people talk about polar bears a lot when you talk about climate change, because, as one of these apex predators, that’s—you know, someone, one biologist, said—explained it to me that they’re on the thin edge of climate change. They’re experiencing impacts right now. But it’s not just about the polar bears. These impacts happen throughout the ecosystem there, because the ecosystem has evolved to rely on the sea ice, and the sea ice is disappearing. So, when that happens, it sets off—it triggers these impacts that start at the very smallest organisms, the phytoplankton, these things that you can barely see, and it works its way up and impacts the fish and the seals, and eventually gets to the polar bears, too.

AMY GOODMAN: We’re going to leave it there, but we’re going to do part two after the show and post it at democracynow.org. Click here to watch part two. Sabrina Shankman, with InsideClimate News, and Rich Gross, a Sierra Club guide since 1990, who experienced and helped to save a man from this attack. The new book, ebook, is called Meltdown: Terror at the Top of the World.

And that does it for our show. A clarification: After our interview, Naomi Klein contacted us to say the Burnaby pipeline that just got an injunction is owned by Kinder Morgan, not TransCanada. TransCanada is pushing a different Canadian pipeline, Energy East, that’s also facing opposition. 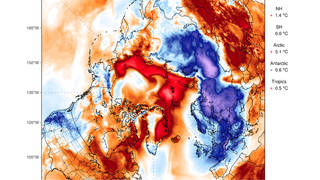