At the Presidential Medal of Freedom ceremony on Monday, President Obama honored James Chaney, Andrew Goodman and Mickey Schwerner, the three civil rights workers who were killed 50 years ago by the Ku Klux Klan after traveling to Mississippi to register black voters. “In that Freedom Summer, these three Americans refused to sit on the sidelines,” Obama said. “Their brutal murder by a gang of Ku Klux Klan members shook the conscience of our nation. It took 44 days to find their bodies, 41 years to bring the lead perpetrator to justice.” We also play an excerpt from the film, “Neshoba: The Price of Freedom.”

StoryJun 26, 2014Mississippi Burning at 50: Relatives of Civil Rights Workers Look Back at Murders that Shaped an Era

AMY GOODMAN: Let’s go to President Obama’s comments Monday at the Presidential Medal of Freedom ceremony, where among those honored, posthumously, were James Chaney, Andrew Goodman and Mickey Schwerner, who were killed 50 years ago by the Klan after traveling to Mississippi to register black voters. In this White House ceremony, President Obama noted it took more than four decades to bring the organizer of the murders, Edgar Ray Killen, to justice.

PRESIDENT BARACK OBAMA: On June 21st, 1964, three young men—two white and one black—set out to learn more about the burning of a church in Neshoba County, Mississippi: James Earl Chaney, 21 years old; Andrew Goodman, 20 years old; Michael Henry Schwerner, 24 years old—young men. And in that Freedom Summer, these three Americans refused to sit on the sidelines. Their brutal murder by a gang of Ku Klux Klan members shook the conscience of our nation. It took 44 days to find their bodies, 41 years to bring the lead perpetrator to justice.

And while they’re often remembered for how they died, we honor them today for how they lived—with the idealism and the courage of youth. James, Andrew and Michael could not have known the impact they would have on the civil rights movement or on future generations. And here today, inspired by their sacrifice, we continue to fight for the ideals of equality and justice for which they gave their lives. Today we are honored to be joined by James’s daughter Angela, Andrew’s brother David, and Michaels wife Rita.

JUAN GONZÁLEZ: The Presidential Medal of Freedom is the nation’s highest civilian honor. We turn now to excerpts of a documentary titled Neshoba: The Price of Freedom, which tells the story of the three civil rights activists.

REPORTER: About 200 civil rights workers have arrived in Mississippi to begin a summer-long campaign. They were trained for it on a college campus in Ohio. This week, another group of volunteers is being taught what to expect in Mississippi and how to cope with it.

REPORTER: They are taught how nonviolently to protect themselves when attacked.

JAMES FOREMAN, SNCC: We’re going down there. We’re trying to face a real situation that will occur. Namely, there will be a mob at the courthouse. We also want the white students who are playing the mob to get used to saying things, calling out epithets, calling people “niggers” and “nigger lovers.”

REPORTER: There is some mystery and some fear concerning three of the civil rights workers, two whites from New York City and a Negro from Mississippi. Police say they arrested the three men for speeding yesterday, but released them after they posted bond. They have not been heard from since.

NEWS ANCHOR: First, the known facts. James Chaney, Andrew Goodman and Michael Schwerner went to Mississippi to help register Negroes as voters. Chaney, a 20-year-old Mississippian, was a veteran of the civil rights movement in his home state. He assisted in the training classes. Goodman, 20, a New York college student, had never participated in the civil rights movement, but a friend says Goodman could never understand how some people could be so lacking in compassion. Schwerner, 24, a seasoned New York social worker, left Mississippi where he had worked since January, to assist in the training school at Oxford, Ohio.

JUAN GONZÁLEZ: The film, Neshoba, goes on to document the role local Mississippi law enforcement agents and the Ku Klux Klan played in the murder of James Chaney, Andrew Goodman and Michael Schwerner.

JOHN DOAR, assistant attorney general: Three civil rights workers were missing, and they had last been seen going up to investigate a church burning in Neshoba County.

NEWS ANCHOR: It’s 35 miles from Meridian to Philadelphia, then 12 miles to Longdale, where the church had been burned. That afternoon, the three were seen at the church site and at the home of its lay leader. About 2:30 they headed west toward Philadelphia.

JIM INGRAM, retired FBI agent: Chaney was outside changing the tire. They had a flat. And there was Price. And when they pulled up, he said, “I’m arresting Chaney for speeding; Schwerner and Goodman, for investigation.”

JOHN DOAR: Cecil Price, deputy sheriff, saw them and stopped them, and he takes them into the jail. So, somehow, some way, the message gets out to the Klan, and then they have to organize.

JERRY MITCHELL, Clarion-Ledger: Edgar Ray Killen began to kind of coordinate things that night, kind of gathered a group of guys, had one of them go get gloves so they wouldn’t have fingerprints, told them the guys they wanted were there in the jail.

NEWS ANCHOR: By 10:00, Price says he had located a justice of the peace who fined the trio $20. Price tells what happened then.

DEPUTY CECIL PRICE: They paid the fine, and I released them. That’s the last time we saw any of them.

JOHN DOAR: The boys were driving back from the county jail, and they started down the road toward Meridian, and they were stopped by a police car. And there would be this group of Klan people.

JERRY MITCHELL: They arrested them and put them in Price’s car.

JOHN DOAR: Then turned right into a gravel, rural road.

JERRY MITCHELL: And Alton Wayne Roberts grabbed Schwerner, and he said to him, “Are you that 'N-word' lover?” And Schwerner said, “Sir, I understand how you feel.” And, bam, shot him, grabbed Goodman. Goodman didn’t even get a word out. Shot Goodman. Chaney, by this point, obviously realizing what’s going down, took off. We know he was shot by several people. They also apparently beat him.

AMY GOODMAN: An excerpt from the documentary, Neshoba: The Price of Freedom. President Obama has just awarded the Presidential Medal of Freedom to the three civil rights activists posthumously, murdered by the Klan 50 years ago, James Chaney, Andrew Goodman and Mickey Schwerner. That excerpt includes comments from U.S. Justice Department Attorney John Doar, who died earlier this month at the age of 92. He was awarded the Presidential Medal of Freedom in 2012.

This is Democracy Now!, democracynow.org, The War and Peace Report. When we come back, we go to Cincinnati to speak with a man who was just released from prison this week after almost 40 years, the longest-held prisoner ever exonerated. Stay with us.

“I Didn’t Know What the Sky Looked Like Anymore”: Ricky Jackson Exonerated After 39 Years in Jail

NEXT“I Didn’t Know What the Sky Looked Like Anymore”: Ricky Jackson Exonerated After 39 Years in Jail 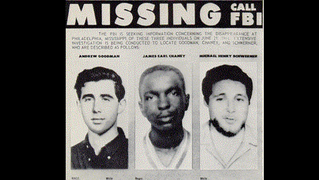 Mississippi Burning at 50: Relatives of Civil Rights Workers Look Back at Murders that Shaped an Era