On Tuesday, the family of Michael Brown held a press conference at a church not far from Ferguson. Michael Brown Sr. was present but did not speak. He wore a red St. Louis baseball cap similar to the one his son had on when he was killed by Officer Darren Wilson, and a T-shirt that read, “No Justice, No Peace.” The Brown family’s attorney Benjamin Crump and the Rev. Al Sharpton criticized St. Louis County Prosecutor Bob McCulloch’s handling of the grand jury process. At the news conference, Amy Goodman asked Rev. Al Sharpton about whether authorities let parts of Ferguson burn on Monday night. She also asked about the three slain civil rights workers awarded the Presidential Medal of Freedom on Monday and whether that case offers hope for federal charges against Wilson.

AMY GOODMAN: “Strange Fruit,” sung by Nina Simone. “Strange fruit hanging from the poplar trees,” about lynching. She said—Billie Holiday, the original singer of this song, said every time she sang the song, she had to throw up afterwards. This is Democracy Now!, democracynow.org, The War and Peace Report. I’m Amy Goodman, with Juan González.

JUAN GONZÁLEZ: On Tuesday, the family of Michael Brown held a press conference at a church not far from Ferguson. Michael Brown Sr. was present but did not speak. He wore a red St. Louis baseball cap, similar to the one his son had on when he was killed by Officer Darren Wilson, and a T-shirt that read, “No Justice, No Peace.” The first speaker was the Brown family’s attorney, Benjamin Crump, who blasted St. Louis County Prosecutor Bob McCulloch’s handling of the evidence before the grand jury, leading to the decision he announced Monday night.

BENJAMIN CRUMP: Attorney Gray and Attorney Daryl Parks and myself, we objected back in August to this prosecutor. We even wrote a letter to Governor Jay Nixon requesting a special prosecutor to be appointed. We objected when he informed us the process that he was going to use, that was different than anything else, different than any normal grand jury that you would have presented. And now, after we watched him last night in his comments, we strenuously objected to this prosecutor and this process. But this morning, after we, like all of you, went through as much of the information—I think it was described as a “data dump”—we went through as much of it as we could and saw how completely unfair this process was, we object publicly and loudly as we can, on behalf of Michael Brown Jr.’s family, that this process is broken.

The process should be indicted. It should be indicted because of the continuous, systematic results that is yielded by this process. And let’s be very honest. Let’s be very honest about this process. We have the local prosecutor who has a symbiotic relationship with the local police and the local police officers who sit in judgment whether they indict the police when they brutalize or kill a young person from our community. And normally, that prosecutor has no relationship or no regards for the young person of color. And so, as Attorney Gray and Attorney Parks predicted at the beginning, we could foresee what the outcome was going to be. And that’s exactly what occurred last night.

AMY GOODMAN: That’s Benjamin Crump, the lawyer for Michael Brown Jr.'s family, speaking Tuesday at the Greater St. Mark's Church in Ferguson. Democracy Now! was there on the streets and then inside the news conference to ask questions after the Reverend Al Sharpton spoke.

REV. AL SHARPTON: Three days after Michael Brown Jr. was killed, we had a major rally in this very church. We said that night, with his parents present, that we had little to no faith in the grand jury by the local district attorney. We said that night that we wanted the federal government to come in. That Sunday, we had a unity rally, where thousands came and joined us. We repeated it, and all the way through the funeral, where I eulogized.

Last night, the appearance by the district attorney made it clear to everyone why we had little faith in a state prosecution. I’ve been out involved in civil rights all my life. We have seen cases go ways that we felt were right and ways that we felt was wrong. I have never seen a prosecutor hold a press conference to discredit the victim, where he went out of his way to go point by point in discrediting Michael Brown Jr., who could not defend himself. How do you, in explaining why you are not indicting a man that killed, try and convict a young man for shoplifting that can’t explain the tape, try to convict him for interfering in the police car, when you don’t hear his side of the story? Have you ever heard a prosecutor go in a press conference to explain to the press why the one that did the killing is not going to trial, but the victim is guilty of several things that no one has established?

It also was very strange to us that he lectured the media—a media that he and others had no problem when you leaked a videotape of Michael Brown in the cigar store or in the convenience store, a media that you had no problem leaking all kind of favorable stuff for the prosecution, a media you had no problem leaking things for the officer. So it seems to me that he has had the use of the media, then has a strange decision: In a town that has been tense, in a town that has been forecast to have all kinds of problems, his solution is, let’s announce it at night after dark. Let’s make sure that all the kids are home, that all of the students are back for Thanksgiving break, and it’s dark outside. And we’re going to announce it, and then I’m going to get up in the dark and castigate the character Michael Brown Jr. I think that it was irresponsible. I think that it was unnecessarily provocative. But I think it only cleared why many of us said, “Let’s go to the federal government,” from the first place. He implied last night that the federal government and the state investigation ran hand in hand and ended last night. That is not the case. The attorney general has released a statement saying the federal government investigation continues in the killing and in the review, and Mr. McCulloch’s statements last night led others to believe differently.

Let me be very clear that we were not surprised at what the outcome was. Certainly, it is painful for the mother and father. Certainly, there will be emotional reactions. I have never seen a case where there wasn’t. You’re dealing with their flesh and blood. But let the record be clear: You have broken our hearts, but you have not broken our backs.

AMY GOODMAN: Two quick questions. Yesterday, the grand jury handed down its decision. In Washington, President Obama awarded a Presidential Medal of Freedom to the three civil rights activists, Schwerner, Chaney and Goodman, who—their killers were not indicted by the state, but by the federal government. Are you hoping for the same thing here?

And number two, last night, as we covered the protests in front of the Ferguson police station, it was packed with riot police. State troopers were there. All the advanced weaponry was there. When we went over to West Florissant and expected to be stopped there by the police, as we were at the protests months ago, it was wide open. We saw no state troopers, and we hardly saw police. Do you think the authorities let Ferguson burn?

REV. AL SHARPTON: Well, let me say, to the first part—to the first part of your question, because I think the second question has been answered. The first part of your question, it is—and you are probably more aware than most of the media, if not all that are here—it has been the legacy of the civil rights movement that you always had to go to the federal government and could not depend on states, whether it was Goodman, Chaney or Schwerner, whether it was Michael Brown Jr. So, we are not in a strange place. We had hoped we’d be in a different place, but it’s not strange.

And I think that it is interesting that on the day that Goodman, Chaney and Schwerner were given the Medal of Freedom was the day that McCulloch decided, in the dark hours, to announce his state decision on the Michael Brown case. And eight years ago today, Sean Bell was killed by police in New York. So, all of these things come together. But I think the lawyers have stated the legal case. I say that many of us, from Marc Morial and Cornell Brooks and all of us, this is not our first rodeo, McCulloch. We will deal with this in a way civil rights leaders have.

AMY GOODMAN: That was the Reverend Al Sharpton at the Greater St. Mark’s Church in Ferguson. 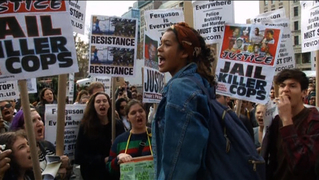