The Priciest Midterms Ever, Brought to You by “Dark Money” and Election Finance Out of Control

The most expensive midterms in history could see one of the lowest turnouts in years. Voting numbers will likely dip below the 40 percent mark of both 2006 and 2010. This despite a record estimate of $4 billion in spending. One quarter of that money, some $1 billion, will come from anonymous, so-called dark money groups. That money has gone into creating some two million television ads — most of them attack ads. We are joined by Lee Fang, one reporter attempting to follow the dark money trail. A reporting fellow with The Investigative Fund at The Nation Institute, Fang blogs about money and politics at the Republic Report.

AMY GOODMAN: You’re talking about now money in politics, which brings us to Lee Fang, who writes for The Nation, is a reporting fellow at The Investigative Fund, blogs about money in politics at the Republic Report. Lee, can you talk about what you’ve found when it comes to dark money, what we know about who’s funding the elections all over this country?

LEE FANG: Well, Amy, we unfortunately don’t know a lot about the donors in this election. A lot of analysts who have taken a look at the midterms are calling this “the dark money election.” We’re seeing hundreds of millions of dollars being poured into campaigns through 501(c)(4) nonprofits or 501(c)(6) business leagues. These are groups that do not have to report their donors. And we still don’t know actually the proportion of the funds that are spent through these vehicles until after Election Day, because some of this data is just coming in. A lot of these groups just went on air in the last few weeks.

We took a look at this dynamic in a recent piece for The Nation. When the Citizens United decision was handed down, Justice Anthony Kennedy made a distinction. He said that these outside money groups—these independent expenditure committees, super PACs and the dark money groups—they cannot coordinate with candidates, the reason being that if big money donors, billionaires or millionaires, can lean on candidates, that would have a corrupting influence. Unfortunately, over the last four years, we’ve seen candidates brazenly appear to break the law. Many candidates appear to be coordinating with many of these dark money organizations, including the U.S. Chamber of Commerce; Americans for Prosperity, the nonprofit affiliated with the Koch brothers; many of these other organizations—some of them spawned just this year to influence specific races.

We’re seeing very little enforcement from the Federal Election Commission. That agency, which is charged with enforcing election law, is deadlocked, three to three, with the three Republican commissioners voting basically in lockstep since 2010 to block any investigation of potential wrongdoing. So we’re seeing this election is turning out to be kind of the Wild West. Not only are campaign entities raising and spending unlimited amounts, much of it in secret, but we have no cop on the beat, we have no enforcement of election law, because of this gridlocked FEC.

AARON MATÉ: Well, Lee, in this Wild West, who are the main interest groups, and what are their objectives in terms of all this spending that they’re putting into this election? What policy goals do they have?

LEE FANG: The largest dark money group in the country is the U.S. Chamber of Commerce. That’s a 501(6) business league that’s funded primarily by corporations, foreign and domestic, though they maintain that their foreign dollars are segregated from their domestic dollars. This organization is the largest lobbying group in D.C. It primarily receives its funds from about 56 different corporations—Dow Chemical, Prudential—and they’ve said that their priorities are restricting the powers of the EPA, fighting back on many different regulatory issues proposed by the Obama administration, everything from the new rules on financial advisers, the fiduciary rule, to for-profit colleges. There’s a range of regulatory issues that they will be leaning on Congress to block in the next two years, should Republicans expand their majority in the House and take the Senate.

In addition to that, as I mentioned, many different Senate candidates are now creating their own dark money groups to influence their specific races. For example, in Kentucky, there’s the Kentucky Opportunity Coalition, a dark money group affiliated with Mitch McConnell that has raised undisclosed money and is dumping money into that race. A similar dynamic is going on in North Carolina, Alaska and other places.

AMY GOODMAN: Is it true that the dark money will soon—the amount of money that’s spent will be more when it comes to dark money than the money that campaigns actually spend? And we won’t even know where it’s coming from?

LEE FANG: Well, we’re on that trajectory. Campaigns are still limited by contribution limits, and same with political parties. Dark money groups face no restrictions. And in the early days of Citizens United, there was a hesitancy to use dark money groups, because the IRS rules are promulgated in such a way that say the primary purpose of some of these nonprofits cannot be on political activity; however, the IRS has been very slow to actually define what “primary purpose” means. And because of increasing congressional pressure on the IRS, we haven’t seen the IRS take action to define “primary purpose” or to revoke the nonprofit status of groups that are clearly just created to influence elections. So, as it’s become more commonplace to use these types of tax entities to move hundreds of millions of dollars into elections, with no fear of enforcement from the IRS, we’ll see this trend continue.

AMY GOODMAN: Very quickly, before we go to break, you mentioned Senator McConnell, his race against Alison Lundergan Grimes. Can you talk about where he’s getting his money from?

LEE FANG: We recently had a story in The Nation taking the very first look at where Senator Mitch McConnell receives his own personal fortune. He’s one of the wealthiest members of the Senate, worth over $22 million. Most of this money comes from his in-laws’ family. He married Elaine Chao, the former secretary of labor in the Bush administration. Her father founded the Foremost Maritime Corporation, a large shipping company. There were many revelations in this piece, one of them being most of these ships owned by this company are registered in the Marshall Islands, largely for tax purposes, and also they use the “flag of convenience” from Liberia, meaning they sail their ships under Liberian maritime law, which is much more relaxed than U.S. maritime law.

In addition, Mitch McConnell has made coal the top issue of his campaign, saying that environmentalists and Democrats are the reason for the decline in production for Kentucky coal. One interesting part of the story is that, in fact, the decline of coal is much more complicated. The rise of natural gas plays a big part. But the other big part is that America is relying more and more on cheap, imported coal. Well, the Foremost Maritime Corporation, Mitch McConnell’s in-laws’ family, exports cheap Colombian coal, potentially undercutting Kentucky coal. And in a recent inspection by Colombian officials, they found as much as 90 pounds of cocaine on one of these coal shipments.

AMY GOODMAN: We’re going to break and then come back to this discussion. Lee Fang will stay with us. We’ll be joined by John Nichols. And I want to thank Ben Jealous for being with us.

AMY GOODMAN: Ben Jealous, who has been doing a lot on elections, particularly in the South. He’s the former head of the NAACP, and he’s the chair of the Southern Election Fund, which he started with Julian Bond. They’re working on several reports with the New Georgia Project. Ben Jealous is also a partner at Kapor Capital, senior fellow at Center for American Progress. Thanks so much for being with us.

AMY GOODMAN: When we come back, we’ll continue to look at the elections. Tonight at 7:00 Eastern time, Democracy Now! willl be on the air for five hours covering this midterm election night. Stay with us. 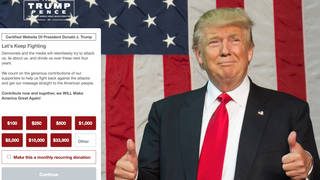