Grassroots Activism Helped Elect Obama in 2008 — Will It Resurface to Push Him in Next 2 Years?

President Obama is facing a similar predicament as Ronald Reagan, Bill Clinton and George W. Bush — the last three presidents to serve two terms. They all governed for the final two years with the opposition controlling both chambers of Congress. “Presidents have the ability to define the last quarter of their second term, even if there is a strong opposition,” says John Nichols, political writer for The Nation. “My fear with Obama is that he will let the Republicans do too much of the defining, and so this becomes an incredibly important moment for grassroots movements.”

AMY GOODMAN: I wanted to move right now from Kentucky to Wisconsin. In Wisconsin, we’re joined right now by John Nichols, John Nichols who writes for The Nation, a political writer there, where his report on the election aftermath is headlined “Obama Need Not Accept 'Lame Duck' Status.” His latest book, with Bob McChesney, is Dollarocracy: How the Money and Media Election Complex Is Destroying America. Now, Wisconsin was very significant last night. Once again, Scott Walker, the governor, has won. He addressed his supporters during his victory speech after he was elected to a second term Tuesday night.

GOV. SCOTT WALKER: When you think about the last couple months, if not the last couple years, it’s interesting the challenges we’ve faced. You see, there was a group out of Washington, Washington-based special interest, who thought they could spend a lot of money and a lot of time in this state and somehow convince the people of the state to be against something. I’ve got to tell you, I’m an optimist. I believed all along if we got a positive message out, that in the end people of the state wanted to be for something, not against something. And look what happened tonight. You see, those big government special interests spent tens of millions of dollars, brought all sorts of ads in here, brought all sorts of attacks, because a few years ago we took the power away from the Washington-based special interests, and we put it in the hands of the Wisconsin taxpayers.

AMY GOODMAN: That’s Republican Governor Scott Walker addressing his supporters during his victory speech after election last night. John Nichols, you’re in Madison. Talk about the significance of this race in Wisconsin. He beat Mary Burke.

JOHN NICHOLS: He did beat Mary Burke, who was waging her first campaign for governor of Wisconsin. She was a Madison School Board member and a relatively wealthy woman, who did contribute some to her own campaign, and considerable amount.

But I find it quite amusing to hear the governor talk about the powerful special interests that were arrayed against him. This morning I was adding up the amount of money that Scott Walker and his supporters have spent in his three election campaigns—2010, 2012 and then 2014. And it’s in the range of $100 million. So, in a relatively small state, Scott Walker has brought in overwhelming amounts of national money to just flood the airwaves, flood the mailboxes, flood social media with messages on his behalf. And yet, last night, he won re-election with a lower percentage of the vote than he got in 2012 and only the same vote that he got in the Republican wave election of 2010.

Now, the fact of the matter is, if Scott Walker won by a single vote, he would have claimed a mandate, and he would have used that mandate to begin talking very seriously about a 2016 presidential race. He actually won last night by about 100,000 votes. And there’s simply no question that that speech that he gave there may have been cheered by a crowd of his supporters, but he set that up—that event up to be a mass event with all of the right camera angles, because he wants that victory, that little bit of a victory speech, played on media across this country, particularly on Fox News, and this is the beginning of a 2016 presidential race.

AMY GOODMAN: John, take this bigger to the piece that you wrote, that report you wrote somehow between our five-hour broadcast last night and today, called “Obama Need Not Accept 'Lame Duck' Status.”

JOHN NICHOLS: Yes. Look, I think it’s important to put elections in perspective. And the first thing that people need to understand is that the Republicans did very, very well last night. In this midterm election, they won back the Senate, and they won it back by more than even I think some Republicans expected they would. They did very well in the gubernatorial races. They did pretty well in a lot of down-ballot races. But if you were to talk about mandates from last night, the important thing to understand is that President Obama’s may have not fared overly well all over the place, his agenda may not have been a total success, but Elizabeth Warren’s agenda did really well, to give you an example. Elizabeth Warren supports raising the minimum wage. Elizabeth Warren supports paid sick leave. Referendums on those issues won overwhelmingly, even in states where Republicans were winning up-ballot. So, first thing to understand is that when we start to talk about this election sending any kind of ideological or policy message, we should be very careful. The president ought to take that in.

But he also ought to take history in. The fact of the matter is that in the sixth year of presidencies, presidents usually have a pretty lousy time of it. Ronald Reagan lost control of the Senate in 1986, losing eight Senate seats. Dwight Eisenhower lost 15 seats in 1958, a major setback. In 1938, Franklin Roosevelt lost eight seats in the Senate and more than 80 seats in the House of Representatives. Each of those presidents was in a very bad position on the day after their sixth year midterm election. And yet, by the end of their second term, each of those presidents had relatively high approval ratings, had achieved major things, and in the case of Franklin Roosevelt, actually got elected to a third term. What we take away from this ought to be a lesson, that presidents have the ability to define the last quarter of their second term, even if there’s a strong opposition.

My fear with Obama is that he will let the Republicans do too much of the defining. And so this becomes an incredibly important moment for grassroots movements. Everything that Lee was just talking about, people need to understand. If you don’t want a Keystone pipeline, this is the time to make the loudest noise possible, because President Obama can stop that, if he feels that there’s a mandate out there to do it. If you don’t want meddling with Social Security, Medicare and Medicaid, this is the time to make more noise than ever about how horrid and dangerous a grand bargain would be, because if the president hears that—and frankly, even if members of Congress on both sides hear that—it has power.

The most dangerous thing at this point would be for grassroots activists to stand down and kind of let the politicians in Washington sort things out. That is not, by any measure, what the American people want. But if people do stand down, if they let this become a definitional midterm election, then the folks on Wall Street are going to take it to the bank. This is going to be a fabulous moment for them, because they will be able to align scared Democrats, who are worried about raising money in 2016, with empowered Republicans and end up moving a lot of agenda that, frankly, we know loses at the ballot box, because the people voted to raise wages, the people voted for paid sick leave, the people voted for a host of progressive initiatives across this country. And so, we’ve got countermandates, and we ought to listen to all of them. Grassroots activists ought to especially recognize that this is the time to be engaged.

AMY GOODMAN: —facing an extremely tight race, it looks like he’s pulled it out. It’s, you know, just thousands of votes apart. But he did declare victory earlier today against Tom Foley, his Republican challenger. And he was one of the few people who had Obama come into town to campaign with him, unlike Alison Lundergan Grimes, for example.

John Nichols, I want to thank you for being with us, political writer for The Nation. We will link to your report, “Obama Need Not Accept 'Lame Duck' Status.” We’re going to break. We’re going to hear from Bernie Sanders, the Independent governor of Vermont, and also look at how the issue of Obamacare and single payer has played into the Vermont race. Very interestingly, the popular governor, Peter Shumlin, facing a serious crisis now, it looks like that governor’s race will be decided by the Legislature. It’s the only state, I believe, in the country where when a candidate doesn’t get 50 percent—for example, in Louisiana, they’ll have a runoff—in Vermont, the Legislature decides who will be the next governor. Stay with us.

Sen. Bernie Sanders: The United States is on the Verge of Becoming an Oligarchy

NEXTSen. Bernie Sanders: The United States is on the Verge of Becoming an Oligarchy 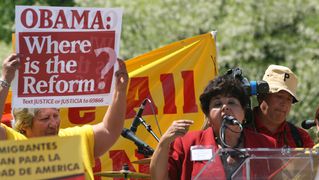