World-renowned political dissident, linguist, author and MIT Professor Noam Chomsky traveled to Japan last week ahead of the three-year anniversary of the Fukushima crisis. Chomsky, now 85 years old, met with Fukushima survivors, including families who evacuated the area after the meltdown. “[It’s] particularly horrifying that this is happening in Japan with its unique, horrendous experiences with the impact of nuclear explosions, which we don’t have to discuss,” Chomsky says. “And it’s particularly horrifying when happening to children — but unfortunately, this is what happens all the time.”

StoryJan 15, 2014From Atomic Bombings to Fukushima, Japan Pursues a Nuclear Future Despite a Devastating Past

AMY GOODMAN: We end our Fukushima anniversary special with the words of world-renowned political dissident, linguist, author, MIT Professor Noam Chomsky, who also traveled to Tokyo last week. Noam Chomsky is now 85 years old. He met with survivors from Fukushima, including families who evacuated the area. Their meeting was filmed by the independent online media channel, OurPlanet-TV. This is Professor Chomsky speaking in Japan.

NOAM CHOMSKY: Particularly horrifying that this is happening in Japan, with its unique, horrendous experiences with the effect of the nuclear explosions, which we don’t have to discuss. And, of course, it’s particularly horrifying when it’s happening to children, who are defenseless and innocent. But, unfortunately, this is what happens all the time. I mean, I had two daughters about—when they were about the age of your daughter, they would come home from school telling us how in school they were taught to hide under desks in case there was a nuclear war. This was right after the Cuban Missile Crisis, when the world came very close to nuclear war. And children were very upset. I mean, I knew children who were friends of families who were sure they were never going to survive because the world was going to be destroyed by a nuclear war. But the official line was: “Don’t worry; everything is under control.” The same was true—again, my daughters, when they were about her age, we stopped feeding them milk, because the scientists, who were concerned, recognized that there was a very high level of strontium-90 in the milk that was coming from atomic explosions the U.S. was carrying out, many open-air explosions. And the government assured everyone that there was no problem, but we just—a lot of people, like us, just stopped feeding the children, gave them only powdered milk, which came from before the explosions.

It happens all the time. So, right now, for example, in Iraq, there is a city, Fallujah, which was attacked by U.S. forces using weapons that no one understands, but they leave a high level of radiation. And there’s studies by Iraqi and American doctors showing a very high level of cancer among children, far higher than before, in the whole neighborhood of Fallujah. But the government denies it. The U.S. government denies it. The Iraqi government doesn’t function. The international organizations refuse to look. So it’s all being carried out by independent organizations and citizens’ groups.

And this is simply everywhere. I mean, in 1961, the United States began chemical warfare in Vietnam, South Vietnam, chemical warfare to destroy crops and livestock. That went on for seven years. The level of poison—they used the most extreme carcinogen known: dioxin. And this went on for years. There’s enormous effects in South Vietnam. There are children today being born in Saigon hospitals, deformed children, and horrible deformations. Government refuses to investigate. They’ve investigated effects on American soldiers, but not on the South Vietnamese. And there’s almost no study of it, except for independent citizens’ groups.

It’s—can add case after case, but it’s a horrifying story, and particularly horrifying for you because you’re suffering from it. But that’s the way governments operate: They protect themselves from their own citizens. Governments regard their own citizens as their main enemy, and they have to be—protect themselves. That’s why you have state secret laws. Citizens are not supposed to know what their government is doing to them. Just to give one final example, when Edward Snowden’s revelations appeared, the head of U.S. intelligence, James Clapper, testified before Congress that no telephone communications of Americans are being monitored. It was an outlandish lie. Lying to Congress is a felony; should go to jail for years. Not a word. Governments are supposed to lie to their citizens.

AMY GOODMAN: Author and MIT Professor Noam Chomsky, speaking during his visit to Tokyo last week. Special thanks to OurPlanet-TV. You can visit our website to see our three days of coverage from Tokyo, Japan, at democracynow.org.

From Atomic Bombings to Fukushima, Japan Pursues a Nuclear Future Despite a Devastating Past 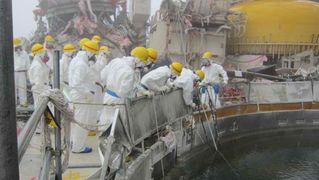 From Atomic Bombings to Fukushima, Japan Pursues a Nuclear Future Despite a Devastating Past