Democracy Now! was there when a group of fast-food workers rallied in front of a New York City McDonald’s Tuesday in support of lawsuits accusing the company of wage theft. Employees have filed suit in three states, claiming McDonald’s and its franchises have stolen their wages through a range of illegal practices. Workers’ accusations include being forced to work while off the clock, having hours deleted from their time cards and being denied meal and rest breaks. McDonald’s worker Franklin La Paz said he’s been consistently overworked and underpaid. New York City Public Advocate Letitia James told the protesters she will formally propose a measure to establish a hotline for workers to report wage theft. McDonald has responded with a statement that they will investigate the claims.

PROTESTERS: We came! We saw! What you did is against the law!

NAQUASIA LEGRAND: We are here today to stand with McDonald’s workers to stop wage theft, because wage theft is not OK. It is a crime.

FRANKLIN LA PAZ: My name is Franklin. I am 25 years old and work just over 30 hours a week at McDonald’s. I work in McDonald’s to make ends meet, but I’ve also been a victim of wage theft, and I’m here today because it has to stop. Like Jennifer, I’ve never been paid the state-mandated uniform maintenance fee, but for months now I’ve also been forced to work off the clock and after my shift ends at midnight, two nights a week for five to 10 minutes, sometimes 10 to 20 minutes off the clock. It means doing clean-up and other basic job duties. It may not sound like a lot, but when you’re living on the edge like me, every penny counts.

PROTESTERS: Everywhere we go, the people want to know who we are, so we tell them, “We are the workers, the fast-food workers, fighting for justice and fair wages.”

NAQUASIA LEGRAND: We all know Ronald McDonald’s make billions and billions of dollars each and every year. There’s no reason why they should take the hard-working money that we work for out of our paycheck. I mean, you’re giving us minimum wage, and you’re taking the money back from us? That don’t make no sense. And these are working families. We’re talking about single mothers, single fathers, students, elderly people. I mean, it doesn’t matter. We’re all working toward something. And this is why it’s shame on you!

RABBI MICHAEL FEINBERG: The faith community is paying attention to this issue. It’s a righteous demand. It’s right that workers are paid their fair due, are given a living wage and shown the respect and dignity on the job that they deserve.

LETITIA JAMES: McDonald’s made a $5.5 billion profit in 2012, while workers are barely making ends meet. These companies should pay their hard-working employees enough to cover the necessities and support their families. It is unacceptable, and it’s now time that government steps in and support these workers and protects their salaries and supports their right to organize. 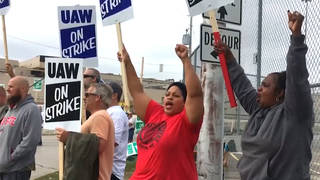 Striking UAW Member: We’ll Strike “As Long as It Takes” to Demand Fair Salaries and Benefits