Watch our extended web-only interview with The Yes Men and indigenous activist Gitz Crazyboy. Earlier this week, members of the group spoke at the Homeland Security Congress posing as U.S. government officials. At the conference, they announced a fictitious new U.S. government plan called “American Renewable Clean-Energy Network” to convert the United States to 100 percent renewable energy by 2030. After the announcement, The Yes Men and indigenous activists led the audience in a large circle dance to celebrate the fictitious plan. Click here to watch Part 1 of this interview featuring exclusive video of The Yes Men’s latest action.

JUAN GONZÁLEZ: And, yes, The Yes Men have struck again. Earlier this week, members of the activist group spoke at the Homeland Security Congress posing as U.S. government officials. At the conference, they announced a fictitious new U.S. government plan called American Renewable Clean-Energy Network to convert the United States to 100 percent renewable energy by 2030. This is a member of The Yes Men who identified himself as Benedict Waterman, undersecretary of policy implementation at the U.S. Department of Energy.

BENEDICT WATERMAN: Thank you very much. It’s a great pleasure to be here and an honor to be making this announcement here. On behalf of the Department of Energy, I’m very excited to announce today a great new plan. It’s beginning a process that will do nothing less than convert the United States’ energy grid into one that’s powered entirely by renewable sources. We’re going to do it in only slightly more time than it took to win World War II.

American Renewable Clean-Energy Network, AmeriCAN, is part of President Obama’s Climate Change Action Plan. It will put ownership of energy production directly in the hands of small companies, local entities and entrepreneurs like yourselves. The U.S. currently generates around 10 percent of our energy from renewable sources, placing us 113th in the world. By 2030, America will produce 100 percent of our energy from renewables, establishing us once again as a beacon of innovation and progress and as a global leader in confronting the supreme challenge of climate change.

AMY GOODMAN: That was Gitz Crazyboy posing as an official from the Bureau of Indian Affairs at the Homeland Security Congress. He’s actually an indigenous tar sands activist. After The Yes Men spoke, they led the crowd in a line dance.

AMY GOODMAN: Well, to find out more, we’re joined right now by three guests. Gitz Crazyboy, who we just heard from him in the tape posing as an official from the Bureau of Indian Affairs, actually an indigenous tar sands activist. Andy Bichlbaum is with us, of The Yes Men. He posed as Benedict Waterman, an undersecretary of policy implementation at U.S. Department of Energy. And Mike Bonanno, member of The Yes Men, played the assistant to Benedict Waterman. This congress, the Homeland Security Congress, what is it?

ANDY BICHLBAUM: This is a Congress that is about contractors who want to get government contracts to do usually things like fortify the border or, you know, other homeland security issues. They pay a lot of money to go, and we got in and gave an announcement that the U.S. was going to convert to entirely renewable energy by 2030. This was the Department of Energy—I was from the Department of Energy, and I announced the sweeping plan, teaming up with the Department of Defense and the Bureau of Indian Affairs, to convert the entire U.S. to renewable energy by 2030, which is entirely feasible. And everybody was thrilled.

JUAN GONZÁLEZ: And they believed you.

ANDY BICHLBAUM: They—yeah, believe it or not, they believed me. This—this didn’t dissuade them.

AMY GOODMAN: The congress—this National Homeland Security Congress has lobbyists, military contractors, and they believed you.

AMY GOODMAN: And they danced with you.

ANDY BICHLBAUM: And they danced with us.

GITZ CRAZYBOY: In celebration, they danced.

MIKE BONANNO: It’s because they think—

MIKE BONANNO: Yeah, they think they’re going to get business.

ANDY BICHLBAUM: They want defense contract—yeah, they go to these conferences because there are government officials who go. There are also—it’s a forum to promote what they do. But I think what it shows, this—the fact that we could get all these people that we think of as being from the dark side—and they are from the dark side—we could get all these people to dance in support of renewable energy, is that there are very few people who actually want the planet to be doomed. There are very few people who want us to continue on this fossil fuel path that’s leading us to doom. Even defense contractors, even Homeland Security contractors, everybody will follow. The only problem is that we have to lead. And we have to force our leaders to actually do what we need them to do, and then people will follow—except for a few oil company execs.

AMY GOODMAN: I was going to say, what’s your next step here? Well, you talked about Keystone XL.

GITZ CRAZYBOY: Briefly. Keystone XL is important, I think, especially like turning a page in America’s history. You have this amazing resistance, the CIA, the new CIA, Cowboy and Indian Alliance, that are adamantly rejecting the TransCanada pipeline that’s coming through. It’s interesting to talk about the pipeline, because the State Department has released that there’s only going to be 35 permanent jobs out of this. People are saying it’s pushing thousands of jobs, but in the end, 35 permanent jobs. They’re pulling out of their responsibility to protect and maintain the pipe. People don’t know about synthetic crude oil, which is thick, and they have to mix it with other chemicals. These expediate the process of the pipes being eaten away. So we have no idea—like, a 50-year pipe with synthetic crude oil pumping through it won’t last 50 years; it’ll last less, depending on the volume and how the mixture is. That’s the CIA alliance here in America’s Heartland. There’s also the resistance pockets we’re seeing in—up with the Enbridge pipeline, with the Unist’ot’en, the Wet’suwet’en Freedom Camp.

AMY GOODMAN: Which is where?

GITZ CRAZYBOY: Northern BC. It’s right in the middle of the pipeline [inaudible].

GITZ CRAZYBOY: British Columbia. And then on the East Coast, you have the Elsipogtog, and there are people who are adamant against fracking. These are the resistance pockets we are seeing that are continuously building every single day, and they’re adamant about this not going through.

AMY GOODMAN: Can you put this in the context of previous actions The Yes Men have done, for those who don’t know what you do?

MIKE BONANNO: I mean, this fits within the continuum of things we’ve done, where we have impersonated government officials or, you know, government or industry bigwigs, infiltrated their conferences, and on their turf said something that either was dark satire, in the tradition of Jonathan Swift, like A Modest Proposal, or simply engage the utopian dream. So we would announce, for example, on live television that Dow Chemical was finally going to clean up the mess in Bhopal and compensate the victims, which they haven’t done even 30 years on from the largest industrial accident in history. And by doing that, it creates this moment of confusion, where people ask, “Why don’t they do that? Why don’t we simply do the right thing?” Because there’s nobody out there who thinks that the people in Bhopal should keep suffering, who thinks that the toxic waste that they left on that site should keep poisoning people for generations. Everybody knows it’s the right thing to do, so why don’t we do it? And this is one of those cases. Converting to renewable energy now is the right thing to do. It’s the only thing to do. And so, why aren’t we doing it?

ANDY BICHLBAUM: And everybody knows it. As soon as you mention it, everybody understands. “Oh, obviously we should,” and they do a circle dance with you. And there are lots of credible plans for converting to renewable energy. You just have to look for them. There’s one, The Solutions Project, that has solutions for every single state in the union, how to convert to convertable energy and what that would mean. There are many projects—there’s one out of Stanford—that show the benefits of this. And it’s not just in reducing the risk of climate change, which is big enough; it’s also going to save $500 billion in healthcare costs, which are due to air pollution. Fifty-nine thousand people die every year from air pollution in the U.S. That’s expensive, besides being terrible.

MIKE BONANNO: And if we don’t do it, we’re going to end up with places that look like where Gitz is from. I mean, Gitz comes from the tar sands. We went and looked at the places where his people have lived for thousands of years, and it is a big black hole in the ground. It is incredible. It’s disturbing. It’s frightening.

GITZ CRAZYBOY: Well, it’s really turning a biodiverse boreal forest into a toxic wasteland. I mean, these problems are going to be there for generations to come. Like monitoring the waste that’s there from the tailings ponds from the excess, like, crap that comes out of the tar sands, minimum 150 years. It’s going to be half—it’s just going to be monitored to see what happens after that. So, literally, we’re digging these things, these gigantic tailings pond wastes, that can be seen from space. We’re destroying all the biodiversity in the area. We’re poisoning the Athabasca watershed. And all these poisons are going north. We’re seeing sicknesses that are killing people within the communities, rare cancer clusters we’ve never had. We’re seeing species of fish being deformed, tumors within animals that walk, mass amounts of birds dying every single year from landing on the tailings ponds. But not only birds landing on the tailings ponds, animals swimming through, because it looks like a river. It looks like a lake. And once they step in there, they have to be euthanized. This is the largest, most destructive industry on the face of this planet. And it’s enjoying every single day.

ANDY BICHLBAUM: And that’s what the Keystone XL pipeline is all about. It’s getting oil from there to the Gulf to be shipped for export to make these companies even wealthier. And the good news is that indigenous activists in Canada have stopped already—have stalled, at least, the Northern Gateway pipeline, which is about the same thing, getting the oil to the Pacific Coast. It’s completely stalled, largely, I think, because of indigenous activism.

GITZ CRAZYBOY: But not only that, I mean, there’s a lot of non-natives, as well.

AMY GOODMAN: Well, The Yes Men, folks. And now you’ve heard their latest action, and you heard it here on Democracy Now! 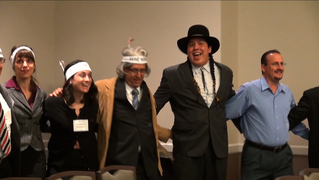